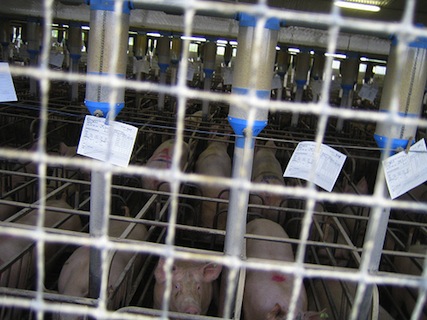 These little piggies went to the factory gestation facility. <a href="http://www.flickr.com/photos/calmaction/4943711017/">CALM Action</a>/Flickr

As a long-time student of the meat industry, I read Ted Genoways’ extraordinary article on conditions at the “head table” of a factory-scale pig-processing plant with delight. As a human being, my reaction was revulsion.

In a single long piece, Genoways lays out the crude history of US meat over the past 80 years. We get the unionization of the kill floor in the wake of Sinclair’s The Jungle, the post-war emergence of meat packing as a proper middle-class job, the fierce anti-union backlash of the ’70s, followed by corporatization, scaling up, plunging wages, and then, well, all manner of hell breaking loose, graphically documented by Genoways. All I can add to the story is to emphasize how forces in the broader economy turned the meat industry into one that profits not by putting out an excellent product, but rather by relentlessly slashing costs.

In his story, Genoways reports that Quality Pork Processors sped up its kill line by 50 percent between 1989 and 2006, while the plant’s workforce “barely increased.” The strange malady acquired by those workers in Austin, Minn., makes for an eye-popping story; but the rough conditions they worked under aren’t the exception—they’re industry standard. By 2005, things had gotten so dire for meat-packing workers that Human Rights Watch—typically on the lookout for atrocities in war zones—saw fit to issue a scathing report on their plight. The report’s title says it all: “Blood, Sweat, and Fear.”

WHAT drives such routine worker abuse? What would make a company steadily increase pressure on its workers to the point of endangering them, even as wages flatline?

The surface answer is, of course, because they can. After the unions evaporated, the meatpacking workforce became extremely vulnerable. By the ’90s, meatpacking had become such an awful job that native-born Americans abandoned the industry as quickly as they could. Undocumented workers from Mexico and points south, fleeing agrarian decline in those regions, filled the void. Unprotected by unions, one brush with authority away from deportation, undocumented workers are easy targets for the predatory practices of powerful employers, as Genoways demonstrates.

But there are deeper forces than naked power on display. Corporate profit strategy shifted in the wake of the 1970s-era stagflation crisis—in a way that transformed not just meatpacking but also the broader business landscape. Companies could no longer assume they had the power to raise prices to burnish the bottom line. Wage inflation, and the fear of it, convinced them that holding prices down was the better idea. Profit would be eked out by selling ever greater volumes of stuff—and by holding costs, including labor costs, to a bare minimum.

As Barry C. Lynn showed in a luminous 2006 Harper’s essay—later expanded into the book Cornered: The New Monopoly Capitalism and the Economics of Destruction—the new profit regime required a new antirust regime. US antitrust authorities still operated under Progressive-era policies that had them looking for instances of anti-competitive behavior. There are two ways companies wield improper market power. The first is monopoly: they use their market heft to impose artificially high prices on consumers, like, say, OPEC sometimes does with oil. The second is called monopsony. That’s when dominant companies use their weight to squeeze their suppliers—everything from their own workforces to the companies that sell them inputs—into giving them better terms.

In the ’80s under Reagan, the authorities essentially stopped prosecuting monopsony and focused only on monopoly, Lynn shows. It was a convenient change for Big Business, because gouging consumers on price was now passé; the path to profit growth lay in gouging suppliers on cost. The goal was to get as big as possible and sell products as cheaply as possible, keeping volume high and the the antitrust cops at bay; and impose relentless pressure on cost. The strategy sparked a massive wave of consolidation, as companies bought each other out, scaled up, and/or merged in a rush to grab market share.

The food industry is probably the example par excellence of the post-Reagan monopsony economy. Lynn shows that Wal-Mart’s move into groceries, starting in the early ’90s, accelerated the industry’s already-rapid consolidation. In order to remain profitable despite Wal-Mart’s constant demand for more product at ever-lower prices, food companies had to get bigger and bigger—and constantly hunt for opportunities to slash their expenses.

The meat-processing giants led the way. A 2007 report (PDF) from University of Missouri researchers Mary Hendrickson and William Heffernan tells the story. In 1989, the four largest hog processors slaughtered 34 percent of the hogs raised in the United States. By 2005, that ratio had risen to 64 percent. The same trend held sway in beef and chicken—and has only intensified since. Today, just four giant companies—Tyson, Cargill, JBS, and Smithfield—process more than half of the beef, chicken, and pork consumed in the United States.

Yet more consolidation may be afoot. Smithfield, by far the globe’s largest pork producer, is actively looking to get even bigger. According to Bloomberg, among its potential buyout targets are Sara Lee, which has become a major player in the processed meat sector; and even Tyson, the largest overall US meat producer. A combined Smithfield/Tyson would own dominant positions in pork, beef, and chicken.

As these companies lurch along, forever looking to get bigger and cut corners to maintain profitability, society pays a steep price for all the cheap meat they churn out. Genoways nailed how workers fare under our cheap-meat regime. Abuse of animals is routine. Entire ecosystems get trashed, as is the case of the Chesapeake Bay—once one of the globe’s most productive fisheries, brought to near-ruin by runoff from a stunning concentration of factory chicken farms. Family farmers are literally turned into serfs as they scale up to meet the industry’s demands. And we all face the menace of the antibiotic-resistant pathogens now brewing up on animal factory farms, which now consume 80 percent of antibiotics used in the United States (both to make livestock grow faster and keep them alive in cramped, filthy conditions).

Meanwhile, the industry can be expected to vigorously fight any attempt to curtail its abusive practices. Market power extends to the political sphere—the meat lobby is one of those powerful D.C. players that—like oil and banking—has the cash to maintain friendships on both sides of the political aisle. As Monica Potts recently reported on Grist, the meat lobby has financed a push to stop Obama’s USDA from implementing new rules that would force the big processors to deal more fairly with farmers. The rules, mandated by the 2008 farm bill, stand in danger of being nixed. Advocates are encouraging consumers to call the White House to urge President Obama to stand strong against the pressure.