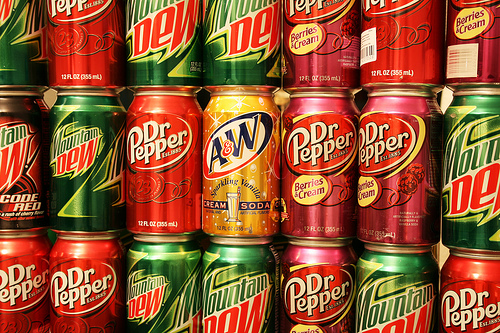 Turns out soda has something in common with cigarettes: they’re both habit-forming from an early age. A recent study by the Centers for Disease Control and Prevention uncovered that one-fourth of the 110,000 high schoolers surveyed drink at least one can of soda per day. Add Gatorade into the mix and the number jumps to two-thirds. On the bright side, the CDCP research team reported that teens drink water, milk, and fruit juice more often.

Though the number of teens drinking soda are substantial, the research team found a decadal drop in overall consumption of sugary drinks. Back in the 1990s and early 2000s, three-fourths of high schoolers imbibed a sugary drink, 10% more than they do today. This is positive news, especially given the nation’s current battle with rising obesity rates. A UCLA study explored the connection between soda intake and obesity and found that adults who drink one or more sodas or other sugar-sweetened beverages each day are 27% more likely to be overweight or obese. Gradual decreases in soda intake at a young age can not only help reduce expanding waistlines, they’ll also reduce the annual $270B price tag associated with obesity, which includes increased health care costs, loss of productivity due to more disabled workers, and more obesity-related deaths.

So is banning soda machines in schools a success? Not entirely. Nancy Benor of the CDCP told the Associated Press, “Getting them out of the schools doesn’t solve the problem completely because a lot of these drinks are consumed in the home.”

Now for some bad news. A separate study by CDCP tells us more of what we already know: physical activity levels among American teens is embarrassingly sub par. Gauging fitness levels based on the Healthy People 2020 campaign, CDCP researchers found that just one out of ten teenagers are meeting the bare minimum of the Healthy People campaign goals: 15% met the aerobic exercise requirement, 51% met the muscle strengthening challenge, and only 12% met both. So should kids take Physical Education classes every day? Instilling exercise as a value or a habit, something you have to do every day like brushing your teeth, or drinking water instead of soda, will go a long way toward keeping children healthier.