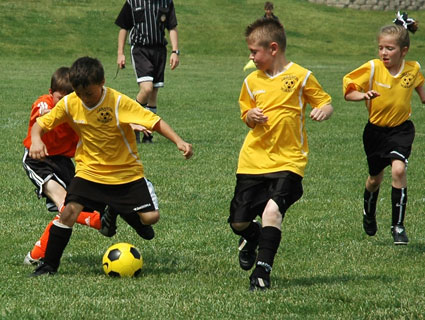 A new study puts a hefty price tag on climate change by linking it to the air you breathe. The report, published yesterday by the Union of Concerned Scientists, concludes that CO2-induced temperature increases will worsen ground-level ozone concentrations (the kind coming from power plants and exhaust pipes, not the kind that shields the Earth from UV rays). Higher concentrations of ground-level ozone threaten the health of millions of Americans, an impact that could cost the US $5.4 billion in 2020. If that’s not compelling enough, here’s what the study’s findings mean for you:

If you’re an athlete, work outdoors, or live in a low-income community or in any of the 322 counties that do not meet the current national ozone standard, then you’re also at high risk. And if you’re a farmer, ozone pollution in rural areas may also lower your crop yields.

So what to do? There’s the obvious, like riding a bike or taking mass transit instead of driving. Also, you could avoid mowing your lawn on bad ozone days. In late July, the Environmental Protection Agency is expected to announce a stronger ozone standard as well as new proposed rules to reduce greenhouse gas emissions from power plants. But the EPA has already delayed tightening its ozone standards three times, and now the coal power plant industry and related labor unions are lobbying Congress to delay the air pollution rules. Rep. Fred Upton (R-Mich.), Rep. Ed Whitfield (R-Kent.), and Sen. James Inhofe (R-Okla.), who have previously tried to reverse the EPA’s ability to regulate air pollution under the Clean Air Act, have asked the EPA to delay or abandon the rules.

In any case, it might all be too little, too late. The majority of states in the US consistently violate the EPA’s existing limit on ozone concentration. And there is virtually no entity that sets standards these issues at the county and state levels, report co-author Jerome Paulson said in a press conference call. He adds that “there are essentially no national level recommendations,” either, because none of the federal agencies have the authority to legally mandate them.