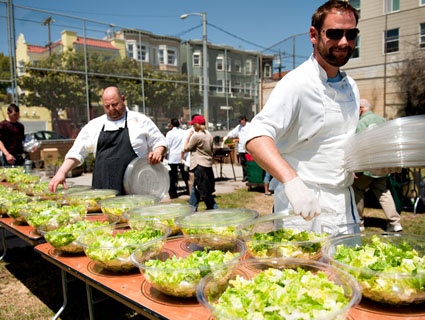 On the menu for 900 Mission High School students Thursday: Lumachine with Sunday Supper sauce and chopped salad. Translation? “Fancy mac and cheese,” Delfina restaurant owner Craig Stoll tells me while mixing 20 giant bowls of salad. Stoll and his volunteers from Delfina were up all night peeling and cutting vegetables for this special celebratory lunch, he says. He’s here because Sam Mogannam, the owner of Bi-Rite grocery—another family-owned Mission District neighborhood staple—called him and four other local restaurants and asked them to volunteer their time and food to help Mission High.

Why are these famous chefs standing on a football field under the scorching sun, flipping burgers on portable stoves for high school seniors? Because this is one of many ways in which Mission High motivates students around standardized testing and No Child Left Behind requirements. In 2009, Principal Eric Guthertz promised students he’d grant them one of the three wishes if they helped Mission High raise test scores: A meal served by a famous chef, Guthertz wearing a bear (school mascot) outfit to the superintendant’s office, or Guthertz dancing the Macarena in front of everyone. Students voted overwhelmingly for the meal. Their test scores went up by 70 points—more than in any other high school in San Francisco last year—and Guthertz had to pay up. 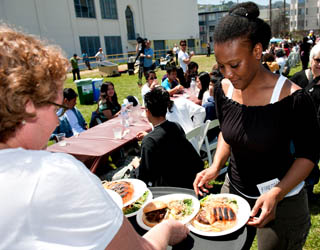 Mission High parent volunteers serving studentsNear the chefs, Mission High School History teacher Amadis Velez plays rhythm-and-blues tunes and English teacher Tadd Scott plays reggae with students using a solar-powered music amplifier. As students trickle onto the football field, parent volunteers Debbie and Emar Garabato—whose twin daughters Haley and Sandi attend Mission High—line up to serve the teens. Debbie works night shifts at a casino, but she didn’t want to miss this. “I love Mission. I volunteer here all of the time,” she tells me. “Everybody knows everybody here,” she says. Garabato tells me that Haley’s teacher Taica Hsu just helped her daughter raise $1,600 to write and produce a play that she’ll perform on May 18th. Haley’s younger sister now wants to transfer here from Washington, Garabato says.

“We didn’t even see you chew that!” a student laughs at math teacher Betty Lee, who just finished a hamburger. At another table, choir teacher Steven Hankle tells me he’s not used to eating food like this. That’s probably because an average teacher’s salary—which is on par with that of a toll taker or bartender—doesn’t really make it easy to dine at top-notch local restaurants like these. Most students tell me they give the meals five stars.

Two hours later, biodegradable food containers and utensils pile up in compostable bins and the food and folding tables are gone. Students are off to after-school clubs and sports practice. “Thank you, Principal Guthertz!” one student yells as Guthertz puts trash in garbage cans. Guthertz says something back, but I can’t hear it. He’s lost most of his voice by now.

*Editors’ Note: This education dispatch is part of an ongoing series reported from Mission High School, where education writer Kristina Rizga is embedded for the year. Read more: “One Undocumented Teen’s Tale.” Plus: Sign up for our weekly newsletter to get all of the latest Mission High dispatches.