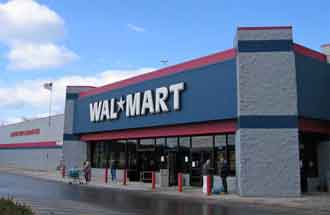 So Walmart Stores announced yesterday that it would give $2 billion worth of food and grants to America’s food banks. Great, huh? The needy get fed—and Walmart gets a ton of positive press. Two billion is no chump change. Okay, true, it’s less than one-half of 1 percent of Wal-Mart’s sales—a staggering $405 billion for fiscal 2010. But still.

Giving to help the hungry is a smart marketing strategy for Walmart. Low-income people are among the retail king’s biggest customers, after all, and feeding people during hard times is a fantastic image-booster. But as with Walmart’s embracing of compact fluorescent light bulbs—part of a major push to green its image (and sell a shitload of product)—there’s something duplicitous in all of this. I use that word because even as Walmart burnishes its image by unloading food it doesn’t want (see below), it is contributing to hunger on the other end—and leaving taxpayers to bail out its undercompensated employees.

It’s great that Walmart is giving to the poor. But the problem is that it doesn’t take care of its own. In our January/February 2009 issue, Sasha Abramsky, author of the recent book Breadline USA, profiled Aubrey Edick, a Wal-Mart employee in upstate New York trying to scrape by on $125 a week:

To balance the budget, Edick often skimps on food, some weeks spending little more than $10 on groceries, about one-quarter what the federal food stamp program calculates is needed for three “thrifty meals” a day. She patronizes the grimy discount stores whose prices run even lower than Walmart’s, and can tick off their notable sales going back for months. “I had some oranges,” she recalls with a self-deprecating smile. “A couple of months ago, they had grapes on sale.” And, “If it’s less than three dollars for a package of six steaks, that looks like a good deal to me.” (She tries not to think too hard about the quality of a 50-cent steak.) Her staples include PB&J, canned ham salad, soup: “I’ll get chicken noodle or Campbell’s Chunky. There’s meat in there. You can pour it over noodles and put butter on it. It’s like a delicacy.”

Edick, who is doing somewhat better now, was too proud to resort to food stamps at the time—although some generous MoJo readers sent her $500. But large numbers of Walmart employees have been compelled to go on the dole. Abramsky writes:

In essence, the nation’s biggest employers of unskilled labor often leave workers having to feed from the public trough. In 2004, a year in which Walmart reported $9.1 billion in profits, the retailer’s California employees collected $86 million in public assistance, according to researchers at the University of California-Berkeley. Other studies have revealed widespread use of publicly funded health care by Wal-Mart employees in numerous states. In 2004, Democratic staffers of the House education and workforce committee calculated that each 200-employee Walmart store costs taxpayers an average of more than $400,000 a year, based on entitlements ranging from energy-assistance grants to Medicaid to food stamps to WIC—the federal program that provides food to low-income women with children.

Walmart announced its new giving program, naturally, with a self-congratulatory press release. “By working together, we believe we can reach a day where no individual in this country has to go to bed hungry or worry if there will be food to put on the table tomorrow,” states Walmart’s public relations staff—er, I mean Eduardo Castro-Wright, Walmart’s vice chairman.

But read between the lines: The release says that $1.75 billion of the total comes in the form of 1.1 billion pounds of direct food donations from Walmart and Sam’s Club stores and warehouses. In other words, it’s surplus inventory: stuff that wasn’t selling fast enough. (I confirmed this with Feeding America, one of the charities involved.) This isn’t to say Walmart isn’t donating plenty of good stuff. My point is that donating unsold merchandise (a good portion of which would have been written off as losses anyway) is a far cry from, say, donating a fixed portion of cash sales to food charities.

America’s top retailer also promises that it “will help each of its 1.4 million U.S. associates…find opportunities to support food banks, senior meal delivery programs and other hunger relief organizations in their communities.”

Which must mean that these Walmart and Sam’s Club employees are getting a raise. Right? As they say, charity begins at home.