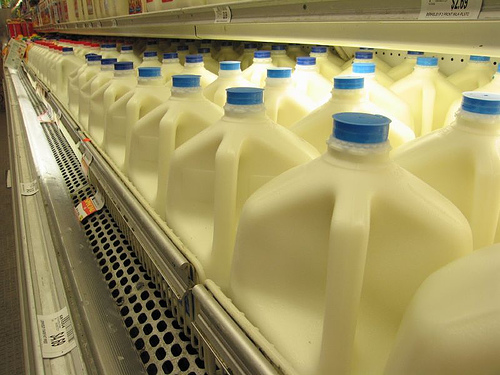 With soy milk sales soaring, the dairy lobby wants to stay top cow. Today, the National Milk Producers Federation (NMPF) petitioned the FDA to ban words like “milk” and “cheese” from any products that aren’t made from dairy milk. Now, both the soybean lobby and dairy lobby are powerful presences on the Hill, as the fracas over last year’s climate bill showed. But this goes to a whole new level of ridiculous.

Firstly, even though NMPF president Jerry Kozak said that “…many products that use the term [milk] have never seen the inside of a barn,” he could have just as well have been talking about the NMPF’s own products. Most of the milk produced in this country doesn’t come from a bucolic barn: it comes from factory farms like this one run by Dean Foods, the nation’s largest milk producer, where cows are confined in filth-filled pens and have their tails amputated. If that’s what a “barn” looks like, I’ll take the soy processing plant.

Secondly, the word “milk” has lots of uses and has been used for non-dairy milks like coconut for a long time. Asking the FDA to only allow dairy products to contain the term “milk” is like asking it to make sure only the word “meat” is only used by products with beef in it. Consumers know that Silk soy milk isn’t real dairy milk, just like they realize that Boca Burgers aren’t real hamburger. Instead, the move to ban “milk” from non-dairy products is a transparent ploy by the NMPF to hurt the soybean industry that, thanks to increasingly health-conscious consumers and ethanol production quotas, is growing stronger every year. It’s notable, also, that when not battling soybean farmers the dairy lobby works hard to keep its foot firmly on the throat of its own industry, to the point where they’ve been sued for being a monopoly and trying to drive small dairy farmers out of business: the same farmers whose milk might actually come from barns rather than football-field sized factories.

And thirdly, even though some products, like Coffee-Mate’s powder creamer, are labeled as non-dairy but actually DO contain milk derivatives. So what would be the labeling change there?

Despite this, the NMPF contends that dairy milk is better than soy, remarking in its press release that non-dairy products “can vary wildly in their composition and are inferior to the nutrient profile of those from dairy milk…” Actually, soy milk and dairy aren’t that different nutritionally, except for that milk is fattier. For example, a cup of Trader Joe’s vanilla soy milk has 30 less calories than a cup of 2% milk. A cup of soy milk has 0% of your daily saturated fat, while milk has 15%. Dairy does have twice the protein as soy milk, but soy milk has 10% more calcium. Dairy has 1 gram more sugar, but soy milk has 15% less vitamin D. It’s a bit of a toss-up nutritionally, but I’m lactose-intolerant so I’ll choose the “milk” that doesn’t make me gassy and crampy. I’m not alone: lactose-intolerant immigrants like Asians (90-100%) and Hispanics (50%) are some of the fastest-growing populations in the US, so the NMPF might want to think less about fighting soy and more about how they’re going to deal with people who can’t drink milk to begin with.