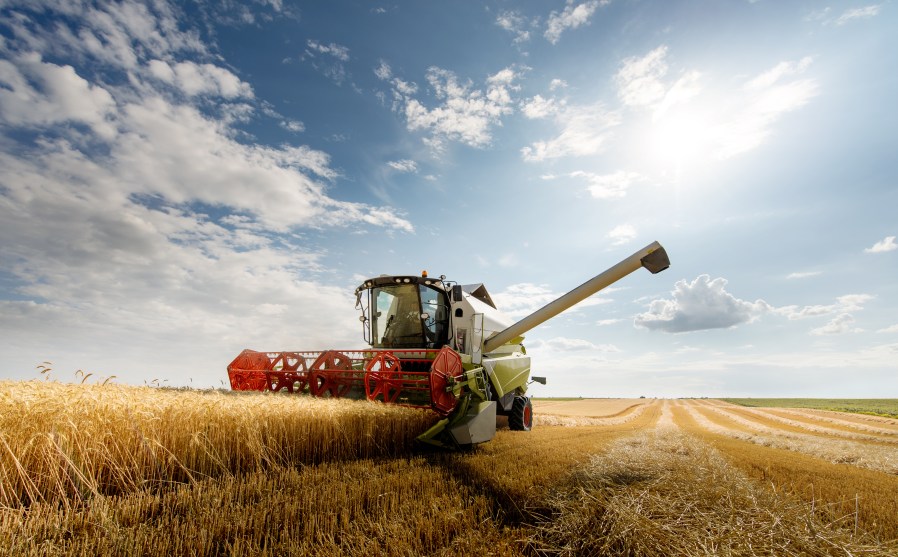 A combine harvester working in a wheat field.Getty Images

Food companies and governments must come together immediately to change the world’s agricultural practices or risk “destroying the planet,” according to the sponsors of a report by some of the largest food and farming businesses released on Thursday.

The report, from a task force within the Sustainable Markets Initiative, a network of global CEOs focused on climate issues established by King Charles III, is being released days before the start of the UN’s Cop27 climate summit in Egypt.

But the pace of change has been “far too slow,” the report finds, and must triple by 2030 for the world to have any chance of keeping temperature rises under 1.5 C, a level that if breached, scientists argue, will unleash even more devastating climate change on the planet.

We are “rivals and competitors. We hate each other’s guts, we don’t come together on anything unless there is a huge crisis.”

The report is signed by Bayer, Mars, McCain Foods, McDonald’s, Mondēlez, Olam, PepsiCo, Waitrose, and others. They represent a potent political and corporate force, affecting the food supply chain around the world. They are also, according to critics, some of those most responsible for climate mismanagement, with one calling the report “smoke and mirrors” and unlikely to address the real crisis.

Food production is responsible for a third of all planet-heating gases emitted by human activity and a number of the signatories have been accused of environmental misdeeds and “greenwashing.” Activist Greta Thunberg is boycotting Cop this year, having called the global summit a PR stunt “for leaders and people in power to get attention.”

“We are at a critical tipping point where something must be done,” said task-force chair and outgoing Mars CEO, Grant Reid. “The interconnection between human health and planetary health is more evident than ever before.” Big food companies and agriculture must play a big part in changing that, said Reid. “It won’t be easy but we have got to make it work.”

Agriculture is the world’s largest industry. Pasture and cropland occupy around 50 percent of the planet’s habitable land and use about 70 percent of fresh water supplies. The climate crisis is challenging the industry across the world but the group’s call for change comes as the industry—which employs 1 billion people—is facing supply chain issues in the wake of the coronavirus pandemic and soaring inflation. It also comes amid mounting skepticism about promises to change from companies that have contributed to climate change.

These current issues must not detract from the need for change, the report argues. “With the inflationary environment and widespread supply chain disruption, it would be easy to reduce our focus on the longer-term challenge of scaling regenerative farming. But we believe it’s vital we maintain a sense of urgency. We must take action now to avoid more acute crises in the future,” its authors write.

Sunny George Verghese, chief executive of Olam, one of the world’s largest suppliers of cocoa beans, coffee, cotton, and rice, said: “We cannot continue to produce and consume food and feed and fiber in the way we are doing today unless we don’t mind destroying the planet.”

“I don’t think any of these companies—say a McDonald’s—has any commitment to curtail the sales of highly polluting products.”

“The only way out for us,” he said, “is how we transition to a more resilient food system that will allow us to meet the needs of a growing population without the resource intensity we have today.”

The report studied three food crops—potatoes, rice and wheat—and has made policy recommendations it will present at Cop27. The task force’s members are working to make the short-term economic case for change more attractive to farmers. “It’s just not compelling enough for the average farmer,” said Reid. More widely the report argues industry and government must also work harder to address the knowledge gap and make sure farmers are following best practices. Third, all parties involved in the agriculture industry—from farmers to food producers to government, banks, and insurers—need to align behind encouraging a shift to more sustainable practices.

“It involves change for all the players including the government, private, public companies, and others. No one player can do this on their own; this has to be a collaboration of the willing. What needs to happen now is action and delivery,” said Reid.

Over the next six months, the group will assess how its members can spread the task force’s work with the aim of establishing a common set of metrics for measuring environmental outcomes, establishing a credible system of payments for farmers for environmental outcomes, easing the cost of farmers transitioning to sustainable practices, ensuring government policy rewards farmers for greening their business, and encouraging the sourcing of crops from particular areas converting to regenerative farming.

Devlin Kuyek, a researcher at Grain, a nonprofit organization that works to support small farmers, said it was increasingly difficult for big agricultural and food companies to ignore climate change. “But I don’t think any of these companies—say a McDonald’s—has any commitment to curtail the sales of highly polluting products. I don’t think PepsiCo is going to say the world doesn’t need Pepsi.”

Kuyek pointed out that Yara, another signatory to the report, is the world’s largest supplier of nitrogen-based fertilizers, “which are responsible for one out of every 40 [metric tons] of greenhouse gas emitted annually.”

“It’s pretty disingenuous,” said Kuyek. “Small, local food systems still feed most of the people on the planet and the real threat is that the industrial system is expanding at the expense of the truly sustainable system. Corporations are creating a bit of smoke and mirrors here, suggesting they are part of the solution when inevitably they are part of the problem.”

Considering the controversial histories of some of the companies involved in the report, Verghese said he expected criticism and scrutiny. “All companies have to stand up to the scrutiny of being attacked if there is real greenwashing. There is no place to hide,” he said. “As far as Olam is concerned we are very clear on our targets, we have had the confidence to make these targets public. All of us have progressed along the sustainable journey. It is not that we have not made mistakes in the past but as we have become better at this we are willing to be subject to scrutiny.”

Both Reid and Verghese said the scale of the issues the world’s food supply is facing cannot be underplayed but that more governments and companies were becoming convinced of the need for urgent change. “I believe change can be made,” said Verghese. “I am optimistic. The fact that these kinds of coalitions are emerging is very positive. We are all otherwise very strong rivals and competitors. We hate each other’s guts, we don’t come together on anything unless there is a huge crisis. Everyone is recognizing there is a huge crisis. We need to come together.”