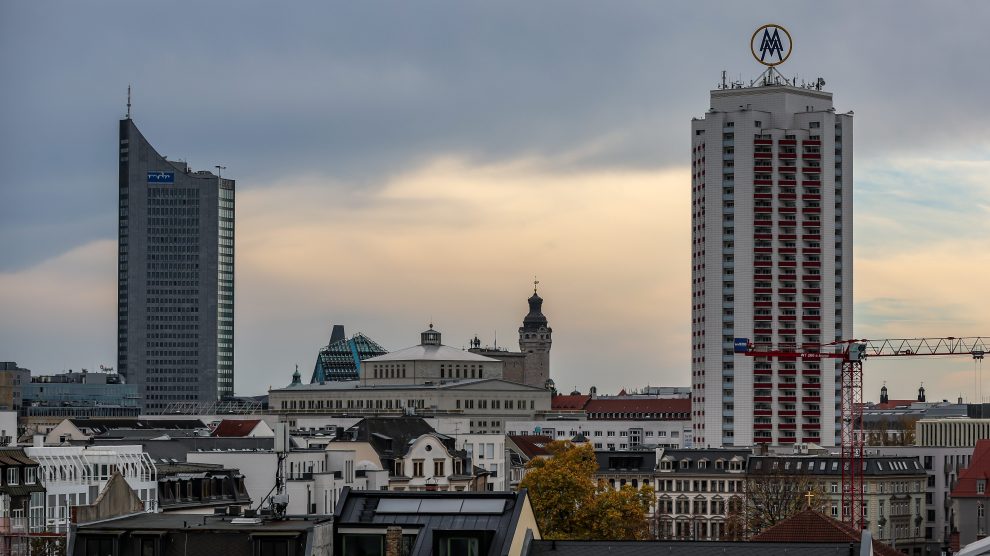 Cities are unpredictable places. Not just in the hustle and bustle of dusty street corners, but across the sweep of time itself. Take Leipzig for example. Once the fifth largest city in Germany, it tumbled into steep decline after German reunification in 1990. Residents left the city in droves, decamping to new developments outside the city boundaries. By the year 2000, one in five homes within the city stood empty.

And then everything changed. In the new millennium the German economy started gathering steam and jobs flowed back to the center of Leipzig. Those once-vacant properties were demolished to make way for new housing developments. As new immigrants chose to make their homes closer to the heart of the city, Leipzig’s suburban sprawl started to contract again. Today it is one of the fastest-growing cities in Germany, adding around 2 percent to its population every year.

Leipzig’s riches-to-rags-to-riches transformation has been dramatic, but it is just one sign of an urban renaissance taking place across the continent. After decades of slowly creeping outward with the creation of new suburban commuter belts, Europe’s cities are growing denser once more—and providing a potential boon for the environment and our well-being in the process. American cities, take note.

Between the 1970s and early 21st century, most cities went through a period of what urban planners call de-densification. Think of it as middle-aged spread: As societies became more affluent and car-based, low-density housing developments on the outskirts of cities provided larger homes for people who wanted more space but to still be within driving distance of jobs and shops. The growth of suburbia was the predominant trend for most cities all over the world in the second half of the 20th century, says Chiara Cortinovis, an urban planning researcher at Humboldt University of Berlin.

“Any form of urban extension in this part of the world is—to be blunt—quite ridiculous.”

When Cortinovis charted the density trends of 331 European cities between 2006 and 2018, that’s exactly the pattern she observed for the first half of that time period. Sixty percent of the cities she studied got less dense between 2006 and 2012. But in the following six years this dynamic suddenly flipped. Between 2012 and 2018, only a third of the cities in the sample were constantly de-densifying, and almost all of those cities were either in eastern Europe or Iberia where city populations are mostly shrinking while suburbia keeps expanding. Instead the picture across the majority of central, northern, and western Europe showed that cities were getting denser. Populations were growing, but most of these people weren’t moving into suburban homes with garden plots and double garages. They were moving into the inner city.

Cortinovis was surprised at just how pronounced these results were. European cities were growing steadily in population size while barely growing at all in terms of their overall urban footprints. And this wasn’t just in cities like Leipzig that had seen an exodus of residents in previous decades. “It also happens in cities with a long-term growing trend,” says Cortinovis—places like London, Stockholm, and Naples. “This means that these cities do have some capacity to absorb newcomers.”

If cities are getting denser, it means that these new people must be living on land that was already developed within the city boundaries. Most likely this is down to a combination of vacant lots being filled, more people living in shared flats and apartments, and existing inner-city land being converted to denser housing. While this inner-city densification was taking place, the development of natural or agricultural land on the outskirts of cities was dramatically slowing down.

The European Union is a big fan of compact cities. In 2011, the European Commission introduced a “no net land take by 2050” initiative that meant that any urban expansion had to be balanced by converting developed land into green areas. In practice, this meant that cities became denser as authorities were encouraged to redevelop land within rather than developing outward. This makes perfect sense for somewhere like Europe, says Philipp Rode, executive director of the LSE Cities research center at the London School of Economics. “Any form of urban extension in this part of the world is—to be blunt—quite ridiculous,” he says. “In mature countries, when you have stagnating populations, I don’t think you can politically justify any form of de-densification in these contexts.”

But keeping cities denser isn’t just about making sure they don’t encroach on natural land. Only about 1 percent of global land is actually urbanized. The major benefit of cities is that they are extremely efficient and low-impact places to live. Studies tend to agree that urban living—at least in higher-income countries—is better for our carbon footprints. One study from 2009 found that New Yorkers register 7.1 metric tons of CO2 each, compared with a US average at the time of 23.9 metric tons. More recent data from the UK shows that Greater London has the lowest per capita emissions of any local authority. Other studies have found similar results for Austria and Finland as well as other US cities.

It makes sense that cities are lower-carbon places to live. If you concentrate people in one area, you can deliver services to them much more efficiently. Imagine how long it would take a postal worker to deliver 500 letters in a village, compared with the same number of people all living in a high-rise. The same is true for other resources like water and waste disposal. And most importantly, people who live within cities are much less likely to drive to work or pick up groceries. Denser urban environments well served by public transport usually mean big reductions in per capita carbon emissions.

Of course, looking for the most efficient way to pack as many people in one place doesn’t always lead to the happiest places to live. We know that crowded cities can be hotspots for pollution and lead people toward loneliness. But there are all kinds of things we can do to make cities more pleasant places to live. We can plant more trees and set aside urban green space. We can reduce the number of cars on the street—or make sure cars that are there pollute less—and use that extra space for bike lanes, outdoor restaurants, or parklets. “There are so many opportunities to make cities much greener,” says Cortinovis.

When your neighborhood has shops, schools, and places to work nearby, there’s much less need to drive.

Even in cities that feel pretty crowded already, there is often a lot more room to densify than we might think. “You can massively densify London. Particularly outer London,” says Rode. That’s even more true if you compare US and European cities. This research project from the Marron Institute of Urban Management at New York University allows you to compare the urban expansion of different cities. Between 2000 and 2013, only 6 percent of new urban land in London came from extending the city. In Chicago, on the other hand, a quarter of the city’s urban growth came from suburban expansion. In lots of cases, city planning laws make it easier for developers to build low-density suburbs rather than redevelop areas within the city that were previously industrial zones, derelict areas, or less efficient housing.

And suburban expansion usually means building environments where cars dominate. If homes are far away from jobs, services, and public transport, then the entire urban infrastructure has to be built around people driving between those places in their cars and then parking somewhere. Building codes incentivize this car-first city planning, says Todd Litman, a transport policy researcher in Victoria, British Columbia. Zoning laws in most US cities require a minimum amount of on-site parking for new residential developments. And any land that is set aside for car parking can’t be used to densify the city. (Berlin and London have both abolished parking minimums except for people with disabilities, and some European cities have parking maximums to limit off-road parking.)

Litman’s family gave up their car after it broke down a few years ago. Now they get around by walking or biking, and renting a car if they need to make longer trips. But when your local neighborhood has shops, schools, and places to work, then there is much less need to make these big trips by car. Urban planners call this concept the “15-minute neighborhood.” Litman says that one sign of whether your local area is built around cars is “what portion of children are getting to school without having to be driven either by parents or on a school bus.” Another good indicator is how many pubs are within walking distance. Got a decent selection of boozers nearby? You probably live in a 15-minute neighborhood.

It’s not just cities that could benefit from densifying. Any urban space can become more useful if it provides a mix of homes, jobs, and services to local residents. And with the growth of working from home, having multi-use local areas looks more attractive than ever. “Having a coworking space on your local high street might bring in another café or restaurant and activate the suburban area that before was a pure commuter town,” says Rode. European cities might be transforming, but maybe America’s vast swathes of suburbia won’t be far behind either.