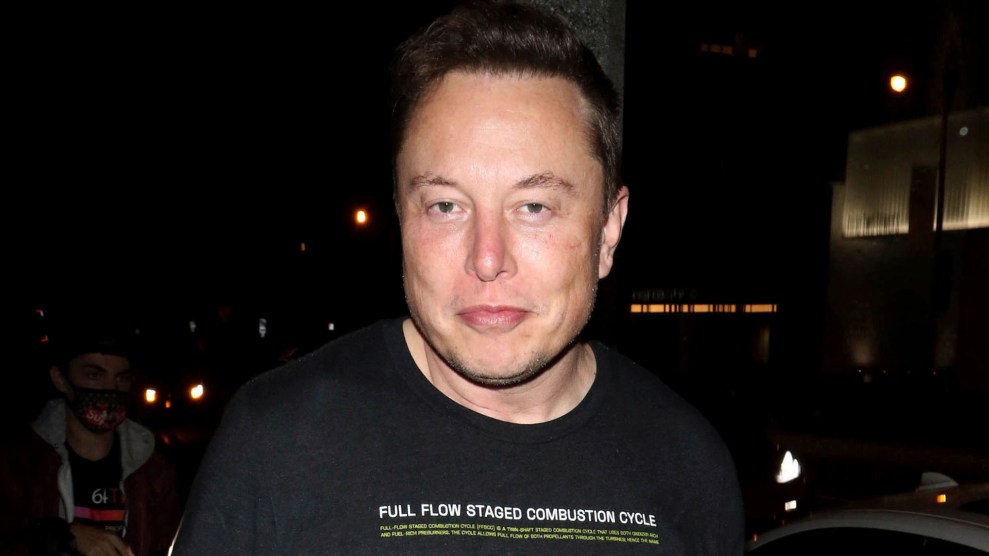 This story was originally published by Inside Climate News and is reproduced here as part of the Climate Desk collaboration.

Less than a week after Elon Musk purchased Twitter for $44 billion, the tech billionaire became embroiled in a series of scandals on his own platform. They included a spike in the use of hate speech on the website and Musk himself posting a baseless anti-LGBTQ conspiracy theory about the attack on Paul Pelosi, House Speaker Nancy Pelosi’s husband.

The scandals have prompted dire warnings from disinformation experts and environmental advocates, who say the popular social media platform plays an outsized role in the spread of falsehoods that are muddying healthy public debate and sowing division ahead of the consequential U.S. midterm elections and COP27 global climate talks.

Musk, the founder of Tesla and a self-proclaimed “free speech absolutist,” sought to quell fears that false and misleading information would spread more freely on Twitter under his leadership, promising to advertisers in an Oct. 27 tweet that the platform would not become a “free-for-all hellscape.”

“Musk claims he wants an open debate, but he bullies activists and politicians who disagree with him.”

But hate speech surged on the site in the days immediately following Musk’s acquisition, compelling Yoel Roth, Twitter’s head of safety and integrity, to address the issue publicly in a tweet. Mentions of the n-word skyrocketed 500 percent in just the first 12 hours, one analysis found. And a study by Montclaire State University found that, during that same timespan, homophobic, antisemitic and racial hate-driven terms posted on the site quadrupled from 84 posts an hour in the week before Musk’s takeover to 398 posts an hour after the purchase.

Musk found himself in yet another scandal a few days later when he shared an article on Twitter that made unsubstantiated claims that Paul Pelosi was drunk and fighting with a male escort on the night he was viciously attacked in his home with a hammer and sent to the hospital with a serious head injury. Police testimony and posts by the attacker online presented a very different story—one where a Canadian citizen, politically motivated by right-wing conspiracy theories, broke into the Pelosi home to kidnap the House Speaker.

“There is a tiny possibility there might be more to this story than meets the eye,” Musk wrote in the Oct. 30 tweet, sharing the false story. Musk deleted the post later that day amid strong public backlash, but not before it was shared more than 16,000 times, with over 76,000 likes.

To many disinformation experts, the moment presented the clearest sign to date that Musk’s takeover of Twitter was a serious threat to the global effort to curb the spread of lies, misinformation and conspiracy theories online, making it difficult for world governments to maintain healthy democracies and build consensus around shared international challenges like combating the climate crisis.

“Musk’s promises in no way accurately portray his plans for Twitter, nor are they a reflection of the evolving reality of the platform as it transforms by the minute,” a coalition of more than 40 civil-society groups wrote Tuesday in a letter to Twitter’s top 20 US advertising partners, urging them to use their influence to ensure the social media site maintains strong community standards and content moderation practices.

“Not only are extremists celebrating Musk’s takeover of Twitter, they are seeing it as a new opportunity to post the most abusive, harassing and racist language and imagery,” the groups wrote to the companies, which included Amazon, Coca-Cola and HBO. “We know that brand safety is of the utmost importance to you. As such, you also have a moral and civic obligation to take a stand against the degradation of one of the world’s most influential communications platforms, and to hold Musk to the pledge he made to you to ensure that Twitter is a welcoming and civil place for everyone.”

The issue, however, goes well beyond Musk’s foray into social network ownership.

Pretty much every major tech company has promised in recent years to crack down on the spread of false and misleading information on their platforms amid mounting public scrutiny, as well as a burgeoning legal framework led by the European Union that seeks to hold Big Tech accountable for the content posted online. But despite those efforts, a growing body of evidence suggests the problem has only become worse over the years, especially when it comes to accurate information on climate change.

Research published this summer found that falsehoods about global warming continue to flourish on social media sites and are often framed through the lens of Western culture wars, placing climate change alongside other hot button topics like gay and transgender rights and gun control. A separate analysis released last month found “a sprawling online network” of Spanish speakers on Twitter, TikTok and other major social platforms who “consistently amplify” climate misinformation and other right-wing conspiracy theories.

And another October report found that an array of online advertisers, most notably Google Ads and Yahoo Ads, have been spreading climate disinformation over the last year to potentially tens of millions of internet users every week by promoting paid content from some of the most prolific online publishers of global warming falsehoods, including Breitbart, Fox News and Epoch Times. Google alone, the report said, likely made around $7.7 million from those ads.

“We can’t solve the climate crisis if Google continues to enable and fund the sites that expose millions of people to climate denial,” Erika Seiber, a spokesperson from the environmental advocacy group Friends of the Earth, said in a press release announcing the October report.

In an email interview with Seiber, she told me that Musk’s recent scandals have been particularly worrisome. And with US midterm elections imminent and COP27 beginning Sunday, she said, their coalition of watchdog and environmental groups will be monitoring the platform closely for spikes in disinformation in the coming days and weeks.

“Musk claims he wants an open debate, but he bullies activists and politicians who disagree with him,” Seiber told me. “Governments and advertisers must hold him accountable and prevent him from creating an explosion of hate speech, extremist conspiracies and climate disinformation.”