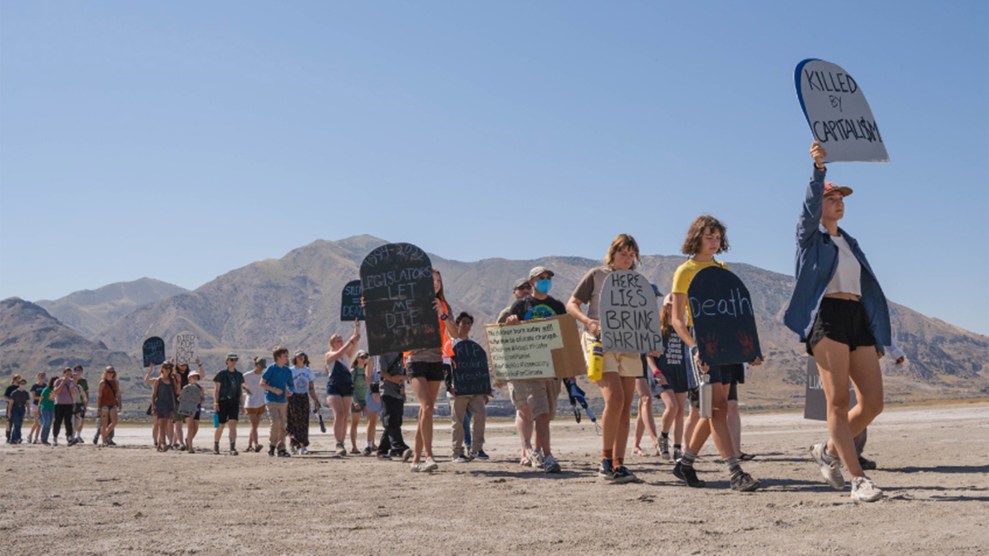 On a hot morning in early August, a group of college- and high-school-aged climate activists decided to hold a funeral. They were drinking hot cocoa on a camping trip to Antelope Island, an island in Utah’s Great Salt Lake that has recently become a peninsula due to the lake’s receding waters, when they thought of it.

“When someone is dying, we sit with them and we spend time with them,” said Muskan Walia, a 20-year-old math and philosophy student at the University of Utah and an organizer with Utah Youth Environmental Solutions, a youth-founded organization. “So we thought, why don’t we do the same for the lake?”

Like many other waterways and lakes in the Western U.S., the Great Salt Lake is currently in an unprecedented and dire situation due to the ongoing megadrought. In July, its surface elevation fell below 4,190.2 feet, the record low set in October 2021. Since then, it has dropped over a foot further. The decline threatens the estimated 10 million migratory birds that stop annually at the lake, as well as the flies, brine shrimp and finely adapted microorganisms lower on the food chain, which are already beginning to die off due to increased salinity. It is also creating toxic dust storms that make the air harder to breathe for Salt Lake City’s 1.3 million residents.

On September 3, more than 100 people gathered on the Great Salt Lake’s dry bed to mourn the lake’s decline with the student activists. Following the funeral, the activists staged a die-in, simulating collective death in a cemetery of handmade gravestones. The action both drew attention to the crisis at the lake and underlined the climate crisis’ connections to other movements: Die-ins, which became a common feature of protests during the environmental and anti-war movements of the 1960s and ’70s, have recently been used to protest police brutality and school gun violence.

Four of the youth activists—Alan Gutiérrez, 22, Natalie Roberts, 15, Lorali Smith, 17, and Walia—spoke with High Country News about the event. This conversation has been edited for clarity and length.

High Country News: How did you get involved with activism about the Great Salt Lake and the climate crisis?

Alan Gutiérrez: I grew up in Salt Lake City surrounded by constant talk about the air quality and other aspects of the environment that were under attack. A lot of the issues directly affected the community I live in, the West Side, which is where the majority of our Black and brown community lives. So, my motivation for getting involved was basically to voice that Utah and Salt Lake City consistently fail our Black and brown and Indigenous communities—not only environmentally but also in terms of education and access to other resources.

Muskan Walia: I’ve lived in Utah for the majority of my life, but even though the Great Salt Lake is my backyard, I hadn’t been there until being part of Utah-YES. Going there as a group—to a dried-up lakebed in raging heat—was my first time at the lake, and for a lot of the others who organized this action, it was theirs, too. It really speaks to the way that for us youth, all we know are the impacts that generations before us had. Even though we’re the ones speaking up, the only landscape that we know is something that is dead and being forgotten and left behind.

HCN: What was the day of the die-in like?

MW: We started off by welcoming people into the space and setting the tone for the day. A local writer named Milo (Emilia) read from their book of poems, lake words. While that was happening, the others set up the funeral. They had made gravestones, and written on them what they thought might kill them if legislators and stakeholders fail to act. Other adults and youth, even little children, had also brought their own gravestones. It was really, really heartwarming, even for something that was so sad.

We gave an introduction to Utah Youth Environmental Solutions, and a land acknowledgement, and then there was a procession. For five minutes we walked in a single-file line from where the speakers were to where we had set up the gravestones. We walked in silence—we had decided that was how we were going to show respect to the lake.

I read a eulogy that came from my perspective of being from a community of color that has really been at the front lines, and what that’s felt like. I drew some parallels about how we knew the abandonment of the lake was going to happen because of the way communities have been abandoned by our decision-makers.

While I was reading that eulogy, the youth dropped one by one and lay on their backs. And then we took a moment of silence to acknowledge and really take in what could be the effect. For those minutes, the student activists were just lying there—on the hottest day in September, with bugs going up their noses and into their mouths, eating them as if they were already dead. And they just stayed there perfectly still.

To continue with the theatrical piece, I tapped on the microphone, and had others tap on their chest, like a heartbeat, signifying that the students in the cemetery could go ahead and get up. That heartbeat signified that there’s hope and that we’re still alive, so let’s go and let’s continue.

HCN: What do you want viewers to take away from the event?

Lorali Smith: A lot of climate catastrophes seem to disappear (from the public eye): We have this moment of fear and excitement about it, and then people don’t really do much. So, for me, the most important part is for this to remain a pressing topic and something that we have conversations about, so that change does happen.

Natalie Roberts: The other important thing is that the solutions are right there. They’re incredibly visible. We’re diverting so much water from these tributaries that are going into the Great Salt Lake. We know what it’s being diverted for—alfalfa, development. So, if we can combat that diversion, which isn’t easy but is definitely attainable, we’d be able to solve part of the crisis that’s happening at the lake.

HCN: What does climate justice mean to you?

AG: When it comes to these issues, you have to care about many other issues because these scenarios are not happening individually. If you care about climate, you have to care about Black liberation, about queer liberation, all of these movements, because they all intersect with each other. And if you want to fix an issue, you have to be able to find solutions that include everyone. In Salt Lake City, a lot of the solutions that are being proposed are either very classist or leave out a voice that needs to be at the table.

MW: A lot of environmentalists come to it from places of privilege; they’re worried about snow and skiing. But for youth organizers of color, this is our life. This is our autonomy and our agency. So, climate justice to me is giving agency back to communities of color. We’re not in this for the skiing. This is our lives.