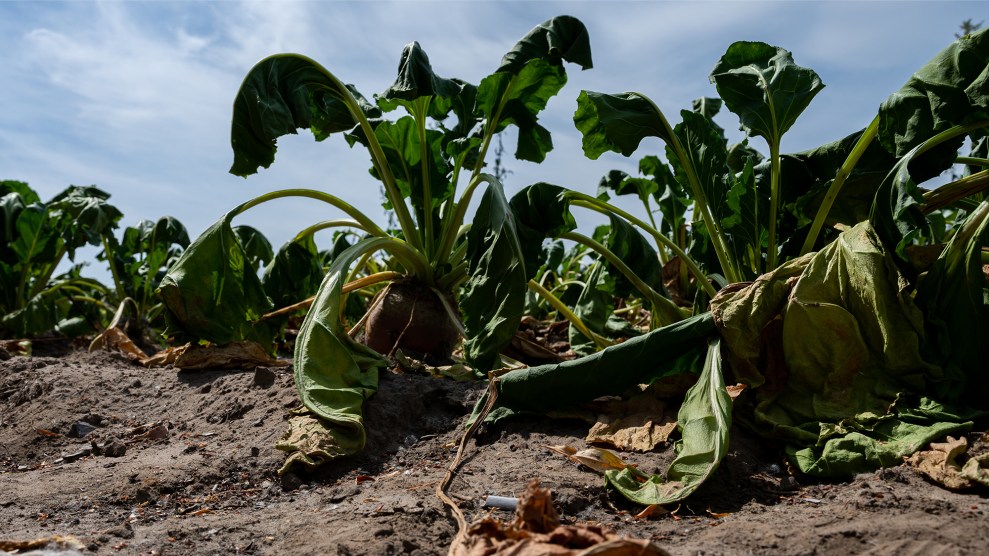 The images are apocalyptic. Pleasure boats marooned in dried-up European rivers. Norwegian reservoirs too low to drive hydropower. China’s largest inland lake turned to a prairie as its water evaporates away.

And so are the warnings. The National Drought Group of the UK predicts that yields of some vegetable crops—carrots, onion, and potatoes—could be cut in half. The European Drought Observatory says that almost half of the bloc is drier than it has been since the Renaissance. China’s agricultural ministry has urged farmers to undertake emergency switches to different crops following a historic heatwave.

With fall harvests coming, it’s natural to be concerned about global food supplies. But people who track the production and trade of major crops say the world is not in an emergency—yet. Pick any location, and you may find signs of strain. But overall, the system still shows resilience. “It’s easy to lose track of the scale of global agriculture,” says Scott Irwin, a widely followed economist and chair of agricultural marketing at the University of Illinois Urbana-Champaign. “It’s just massive, and it’s extremely distributed geographically. If you have a problem in one area, at least historically, that will tend to get offset by better than average growing conditions someplace else.”

“The fact is,” he adds, “as of today, the world has adequate supplies of grain.”

That might seem counterintuitive, given soaring food prices and the lingering disruption of the Russian invasion of Ukraine, where cargo ships that were trapped since February have finally been allowed to depart. But it captures the disconnect between how people experience food supplies locally, as irrigation water is directed away from perishable vegetables and favorite condiments disappear from shelves, and how economists judge the health of a system founded on staple crops such as wheat, corn, and soybeans that can be shipped and stored.

“The current droughts don’t yet look nearly as severe as we’ve seen at least a half a dozen times in my career.”

The most recent monthly assessment, published in mid-August by the US Department of Agriculture, projects higher US and global production for wheat and soybeans and mixed results for corn and rice. Because those predictions are aggregates, they smooth out what producers are feeling locally—better weather in some areas, reduced yields in others—and also the reality that certain commodity crops are planted and harvested at different times of the year. Winter wheat, which is taken up in May or June, was already cut by the time summer heat waves arrived, but hot, dry conditions could have interfered with the pollination of corn, which goes into the ground in the spring.

“A couple of days ago, there were headlines saying South Dakota’s corn crop was unusually low this year—and they have a terrible drought—and that Nebraska was a little below normal,” says Daniel Sumner, an economist and director of the Agricultural Issues Center at the University of California, Davis. “But as of the middle of August, USDA was still projecting a normal national corn and soybean crop in the United States. And that’s because Indiana and Illinois and Iowa had relatively good crops, and are much more important in the national total, than Nebraska or South Dakota would be.”

Even if those differences average out nationally—possibly even globally, when you balance Southern Hemisphere production against the US and Western Europe, or the Americas against Central Europe and Asia—there’s a persistent sense that things are, well, wiggly. Some of the changes in productivity come from farmers’ decisions, like choosing to plant more in order to make up for a dry year, or less to mitigate the fertilizer price hikes created by Russia withholding exports. But some are unquestionably due to unpredictable weather patterns generated by climate change, which are affecting farmers’ routines as well as harming crops already in the fields.

“We’re seeing longer periods of dryness before the next rain event occurs, and that next rain event is more likely to be in the form of heavy rainfall that will end up running off” because the soil has hardened, says Beth Hall, director of the Indiana State Climate Office at Purdue University. “The success of crops this year in the US, in the broader Midwest region, was all about when farmers were able to plant their fields. Those that were planted earlier had roots deep enough that when it was dry, they could tap into some low moisture.” But if fields were muddy from rain and farmers couldn’t get into them, she adds, they planted later—and root systems were shorter and unable to keep new plants heavy before the next downpour came around.

“The problem is that right now we have so many overlapping crises that the backup system is under an immense amount of stress.”

Of course, farmers have always fretted about the weather. The challenge for crop experts right now is determining whether droughts and other disturbances—and the crop shortfalls they may cause—add up to a predictable trend. That’s especially important because, while productivity might not look bad overall, there isn’t much surplus grain stock thanks to scattered droughts last year and the supply shock of Ukraine’s breadbasket being temporarily locked out of the global food system.

“The key thing about stocks is that, if you have a drought, you can use them to keep prices reasonable—because when they get very low, prices get volatile,” says Joseph Glauber, a senior research fellow at the nonprofit International Food Policy Research Institute and former chief economist at the USDA. “I think people were hoping that stock levels would be rebuilt, essentially that we’d have really large crops this year. But there are these drought and weather disruptions around the world, though all the shoes haven’t fallen yet.”

No one who works in crop economics has forgotten that high grain prices more than a decade ago were the spark of civil unrest around the world: riots in Haiti, South America, and South Asia in 2008 and 2009, and the Arab Spring in 2010. And no one thinks things are that bad, yet. “It’s very easy to underestimate how flexible production can be,” Sumner says. “The current droughts don’t yet look nearly as severe as we’ve seen at least a half a dozen times in my career.”

And future shortages are likely to be unevenly distributed. In some parts of the world, droughts have already lasted long enough to profoundly disrupt food production. The people bearing the brunt of that disruption lack the income or power that could help alleviate their suffering. Historically, the Horn of Africa—Ethiopia, Somalia, and Kenya—experiences rainy seasons twice a year, from October to December and again from March to May, and the precipitation is crucial for feeding both humans and livestock. The four most recent rainy seasons all failed. The latest one, which should have ended last May, was the driest on record. A third of the area’s livestock have died. The Famine Early Warning Systems Network, a project of the US Agency for International Development plus international nonprofits, estimates that as many as 20 million people are hungry.

In the past, governments in other parts of the world sent food aid. This year, thanks to droughts and supply shocks, that response isn’t arriving at the usual volume or speed. Wheat from Ukraine, for instance, would have been an aid staple, but the first shipment from there arrived only on August 30. “In normal cases, we can move food from one region to another to make up for losses; the international community, the UN World Food Programme, is able to move food into crisis situations,” says Christine Stewart, director of the Institute for Global Nutrition at the University of California, Davis. “The problem is that right now we have so many overlapping crises that the backup system is under an immense amount of stress.”

The Horn of Africa is an extreme case, but it may also be a glimpse of the future. The global food system exists to allow surpluses to be traded to areas where crops are short. It works, for now. But as weather becomes less predictable and droughts more common, production may become less reliable—and the movement of food to the most vulnerable might grind to a halt.