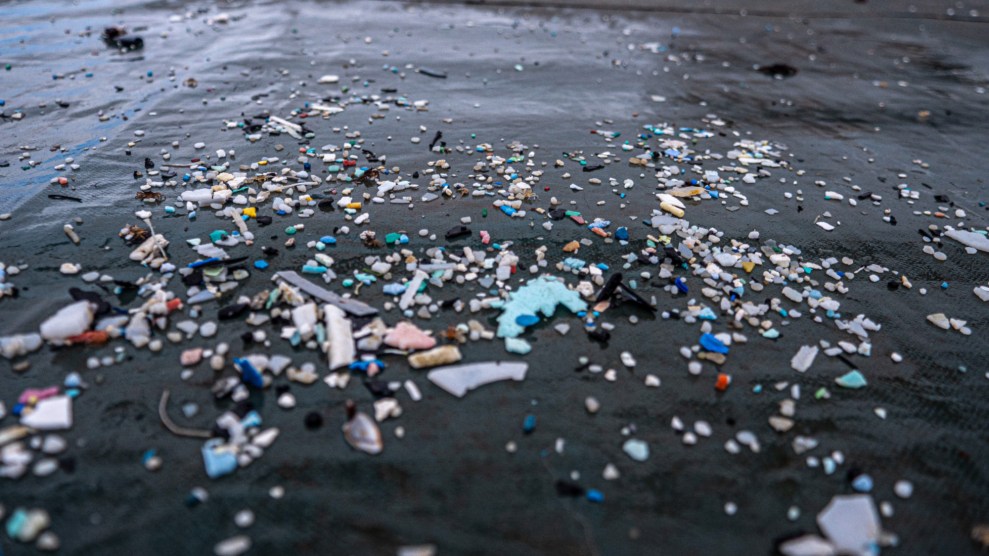 Over 48 days in 2020, 103 tons of plastic were collected from the Great Pacific Garbage Patch.ZUMA Press

This story was originally published by Guardian and is reproduced here as part of the Climate Desk collaboration.

The UN secretary general has declared that the world is in the middle of an “ocean emergency,” and urged governments to do more to restore ocean health.

Speaking at the opening of the UN ocean conference in Lisbon, Portugal, attended by global leaders and heads of state from 20 countries, António Guterres said: “Sadly, we have taken the ocean for granted and today we face what I would call an ocean emergency. We must turn the tide.”

Guterres said the “egoism” of some nations was hampering efforts to agree a long-awaited treaty to protect the world’s oceans.

In March, UN member states were criticized by scientists and environmentalists for failing to agree on a blueprint for protecting the high seas against exploitation. Of the 64 percent of the high seas that lie beyond territorial limits, only 1.2 percent is currently protected.

Marine pollution is increasing and marine species declining, including sharks and rays, whose populations have crashed by more than 70 percent over the past 50 years.

Nearly 80 percent of the world’s wastewater is discharged into the sea without treatment, while at least 8 million metric tons of plastic enters the oceans each year. “Without drastic action, the plastic could outweigh all the fish in the ocean by 2050,” Guterres warned.

“We cannot have a healthy planet without a healthy ocean,” he said in his opening remarks.

“Poor management has reduced the ocean’s natural ability to restore itself…I find it surprising that we should put such a critical resource at risk.”

Guterres, who is from Lisbon, was applauded as he began his speech in his native Portuguese, quoting one of the countries best-known poets, Fernando Pessoa: “God wanted the Earth to be all one. That the sea unites, no longer separates.”

The secretary general referred to the positive news since the last UN Ocean conference in 2017, including progress on a legally binding instrument to conserve and protect biodiversity in waters beyond national jurisdiction—part of the draft UN high seas treaty—and last week’s World Trade Organization agreement to curb harmful fishing subsidies.

But he issued a call to governments to raise their ambitions on global health. “Much more needs to be done by all of us together,” he said, including more funding for scientific innovation. “A healthy and productive ocean is vital to our shared future,” Guterres said.

The theme of the conference is the critical need for scientific knowledge and marine technology to build ocean resilience. Guterres called for a “goal of mapping 80 percent of the seabed by 2030.”

He made several recommendations, including sustainable management that could help the ocean produce six times as much food and generate 40 times as much renewable energy as it does currently, and protecting the oceans and people in coastal areas from the impacts of the climate crisis.

More than 3.5 billion people depend on the ocean for food security, while 120 million work directly in fisheries and aquaculture-related activities, the majority in small-island developing states and least developed countries. Yet SDG (sustainable development goal) 14 (to conserve and sustainably use the ocean seas and marine environment for sustainable development) is the least funded of all the SDGs, Guterres said.

Kenyan president Uhuru Kenyatta, a co-president of the UN oceans conference, told delegates that “oceans are the most under-appreciated resource on our planet” and human activity had placed them under “great stress.”

“Poor management has reduced the ocean’s natural ability to restore itself,” he said. “I find it surprising that we should put such a critical resource at risk.”

Marcelo Rebelo de Sousa, president of Portugal and co-chair of the conference, said that war and the pandemic must not be used as an excuse for inaction. “Oceans are central in geopolitical balance of power,” he said. “We must recover the time we have lost and give hope a chance, once again, before it is too late.”

The draft declaration of the conference acknowledges the world’s collective failure to achieve SDG14 and commits to reversing the health of the ocean, but it does not elaborate on how this will be achieved. It also makes reference to the need for financing for developing countries to help implement Marine Protected Areas.

The final draft of the political declaration is expected to be adopted at the end of the conference. Negotiations between nations on the key instrument to protecting 30 percent of the ocean by 2030—the global ocean treaty—are expected to take place in New York in August.