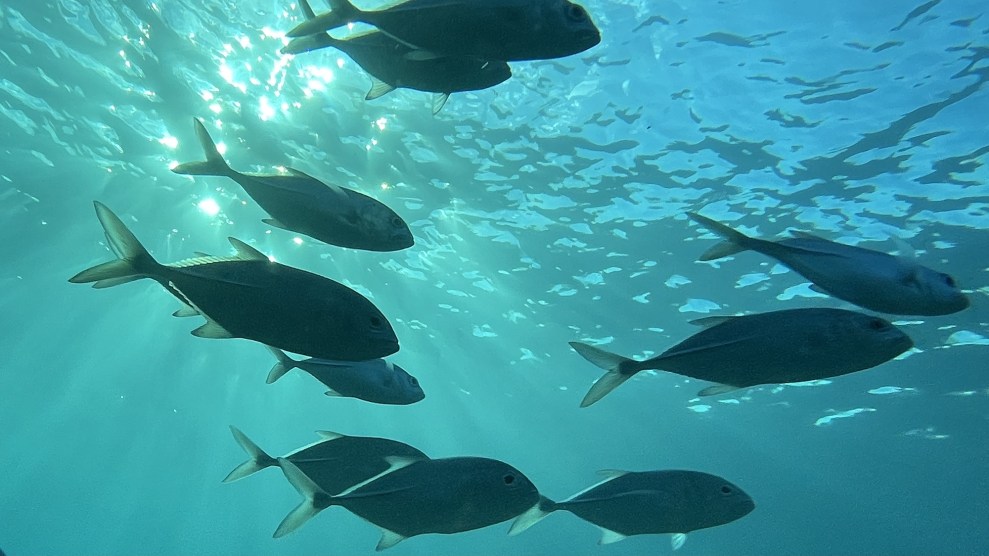 Fish of the genus Caranx in the Indian Ocean, near the Seychelles.Valery Sharifulin/TASS via ZUMA Press

A quarter of a billion years ago, things were not going well on planet Earth. That’s putting it mildly. Back then the planet was in the middle of the worst mass extinction event eve—much worse than the one that wiped out the non-avian dinosaurs 66 million years ago. During this earlier Permian-Triassic extinction event, some 70 percent of land species met their end. Greenhouse gases released by volcanic eruptions in Siberia poured into the skies, cooking the Earth and causing acid rain to fall back down onto the land. Things were so grim that paleontologists have termed this mass extinction the Great Dying.

In the ocean, the situation was even more dire. Temperatures around the tropics shot up by 10 degrees Celsius and deep-sea currents slowed down, which starved the oceans of oxygen. Less than 5 percent of all marine species made it through the Great Dying. It would take tens of millions of years for life in the ocean to recover from rock bottom and return to its previous levels of diversity. Trilobites, a huge group of underwater creatures that had existed in the oceans for more than 250 million years, were wiped out altogether. On land, the dopey-looking Lystrosaurus rapidly spread over the newly barren planet.

For oceanographers Curtis Deutsch and Justin Penn, the Great Dying can tell us a lot about where our present-day planet could be headed if we don’t get a handle on climate change.

“These environmental changes are also happening in the modern ocean today,” says Penn, a research associate at Princeton University’s Department of Geosciences and coauthor of a new paper published in the journal Science. The overall oxygen content in the ocean has already fallen by around 2 percent since the mid-20th century. This led Deutsch and Penn to a natural question: If greenhouse gas emissions precipitated ocean extinctions in the distant past, what level of extinctions might climate change lead us to?

“We wanted to best bracket the plausible range of futures without being overly extreme in either direction.”

To figure this out, the scientists looked at two future emissions scenarios. In one of them, fossil fuel emissions rapidly increase—way beyond current expected trends—and lead to warming of around 4.9 degrees Celsius by 2100. In the other scenario, lower emissions keep temperature increases to just under 2 degrees Celsius by the end of the century. It’s worth noting that this high-emissions projection is an unlikely worst-case scenario—it would require huge increases in coal use, even though such activity peaked in 2013. If countries stick to current policies, it’s more likely we’re headed for 2.7 degrees Celsius of warming, and if they uphold pledges made at COP26, humanity may be able to keep warming under 2 degrees Celsius.

“There is still a huge range of possible futures,” says Deutsch. “We wanted to best bracket the plausible range of futures without being overly extreme in either direction.”

The scientists used these two emissions scenarios to estimate what would happen to oxygen demand and supply in the ocean. Like us, marine animals need to breathe oxygen to survive, but higher temperatures reduce the amount of oxygen seawater can hold and slow down currents that would usually circulate oxygen between the surface and deep ocean. At the same time, warmer temperatures increase the amount of oxygen creatures need to go about their business. This increased demand and decreased availability of oxygen is thought to be one of the major reasons so many marine species died out during the Permian-Triassic extinction.

When Deutsch and Penn ran their models to find out how species would respond in the very high- and low-emissions scenarios, they found two dramatically different visions of the planet’s future. In the very high-emissions scenario, the projected mass extinction rivals the severity of the previous “Big Five” extinctions in Earth’s past—including the Permian-Triassic extinction and the one that wiped out the dinosaurs. But if warming stays at the levels estimated in the low-emissions scenario, the loss of species due to climate change should stay close to its current levels.

“You see us effectively sitting on the good side of a cliff,” says Douglas McCauley, a marine biologist at the University of California, Santa Barbara, who wasn’t involved in the Science paper. But over the edge of that cliff there’s the potential for mass ocean extinction, he says.

“In the very high-emissions scenario, the projected mass extinction rivals the severity of the previous “Big Five” extinctions.”

These potential future extinctions won’t happen evenly over the planet. Deutsch and Penn’s models predicted that marine species in the tropics are likely to move further north and south as oceans warm, while species already living close to the poles are at a higher risk of going extinct altogether. We’re already seeing signs of this movement in today’s oceans, says Louise Rutterford at the University of Bristol in the UK. In 2020, Rutterford coauthored an analysis that looked at where marine species could be found in the oceans. She found that a species’ abundance tended to increase on the sides of its range that were closest to the poles and decrease on the side closer to the equator, suggesting that warming seas were forcing these animals to move away from the equator.

Species that already live near the poles are less likely to have somewhere they can move to when their oceans start warming. That’s why in Deutsch and Penn’s model, poleward species tend to go extinct altogether while tropical species are more likely to move away from the tropics. “You’ve got this potential for this changing of the guard,” says Rutterford.

Scientists know that this movement is happening today, but it’s hard to pinpoint how bad things are at the moment. For a start, we don’t have a great sense of exactly what is happening in our oceans. A lot of the best data on fish abundance comes from studies about commercially important fish species, such as tuna and pollock, while data from tropical species is much sparser. “If you really want to find out what’s going on at the equator, we do need to have studies at the equator,” says Rutterford.

“There are quiet extinctions that are happening almost certainly in the oceans that are not being detected right now. And that wave of undetected extinction is going to become a tsunami if climate change is allowed to advance,” says McCauley.

Even if we do get a handle on climate change, humans are still putting the oceans under extreme pressure due to fishing and changes to marine habitats. In 2008, the International Union for Conservation of Nature reported that 22 percent of assessed marine species were under threat of extinction, including 17 percent of sharks and their close relatives. One of the ways that governments and NGOs have agreed to protect the oceans is by turning vast swathes of them into marine protected areas—an oceanic equivalent to national parks.

“You don’t want to be trying to solve local threats to diversity and just letting climate change undo all that.”

“Marine protected areas are our best protection because in the face of the unknown they offer an ability for us to catch our breath,” says Katrina Davis, a conservation biologist at the University of Oxford. In October, members of the United Nations Convention on Biological Diversity will meet to finalize their goals for protecting biodiversity on the planet. One of the headline proposals is a plan to set aside at least 30 percent of terrestrial and marine areas as protected zones. Protecting coastal areas is particularly important, Davis says, as that is one of the main places where humans and marine species come into conflict.

But marine protected areas will only be a temporary fix if we allow climate change to get out of control, says McCauley. “You don’t want to be trying to solve local threats to diversity and just letting climate change undo all that in the future.” A return to the Great Dying is far from inevitable, but every fraction of a degree of warming that we can halt will reduce the severity of ocean extinctions. “Our main result is that the magnitude of the future extinction depends on the CO2 emissions moving forward,” says Penn. “That story is yet to be written.”