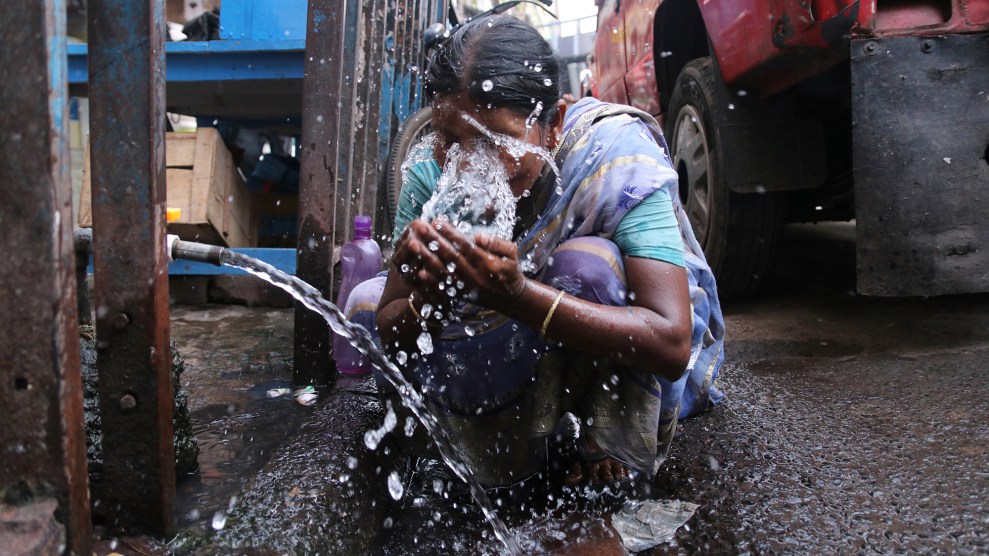 A woman seeks relief from a high temperature of 104F (40C) in Kolkata, India, on April 26, 2022.Debajyoti Chakraborty/AP

For the past few weeks, Nazeer Ahmed has been living in one of the hottest places on Earth. As a brutal heatwave has swept across India and Pakistan, his home in Turbat, in Pakistan’s Balochistan region, has been suffering through weeks of temperatures that have repeatedly hit almost 50C (122F), unprecedented for this time of year. Locals have been driven into their homes, unable to work except during the cooler night hours, and are facing critical shortages of water and power.

Ahmed fears that things are only about to get worse. It was here, in 2021, that the world’s highest temperature for May was recorded, a staggering 54C. This year, he said, feels even hotter. “Last week was insanely hot in Turbat. It did not feel like April,” he said.

As the heatwave has exacerbated massive energy shortages across India and Pakistan, Turbat, a city of about 200,000 residents, now barely receives any electricity, with up to nine hours of load shedding every day, meaning that air conditioners and refrigerators cannot function. “We are living in hell,” said Ahmed.

It has been a similar story across the subcontinent, where the realities of climate change are being felt by more than 1.5 billion people as the scorching summer temperatures have arrived two months early and the relief of the monsoons are months away. North-west and central India experienced the hottest April in 122 years, while Jacobabad, a city in Pakistan’s Sindh province, hit 49C on Saturday, one of the highest April temperatures ever recorded in the world.

In Balochistan’s Mastung district, known for its apple and peach orchards, the harvests have been decimated. Haji Ghulam Sarwar Shahwani, a farmer, watched in anguish as his apple trees blossomed more than a month early, and then despair as the blossom sizzled and then died in the unseasonal dry heat, almost killing off his entire crop. Farmers in the area also spoke of a “drastic” impact on their wheat crops, while the area has also recently been subjected to 18-hour power cuts.

“This is the first time the weather has wreaked such havoc on our crops in this area.”

“This is the first time the weather has wreaked such havoc on our crops in this area,” Shahwani said. “We don’t know what to do and there is no government help. The cultivation has decreased; now very few fruits grow. Farmers have lost billions because of this weather. We are suffering and we can’t afford it.”

Sherry Rehman, Pakistan’s minister for climate, told the Guardian that the country was facing an “existential crisis” as climate emergencies were being felt from the north to south of the country.

Rehman warned that the heatwave was causing the glaciers in the north of the country to melt at an unprecedented rate, and that thousands were at risk of being caught in flood bursts. She also said that the sizzling temperatures were not only impacting crops but water supply as well. “The water reservoirs dry up. Our big dams are at dead level right now, and sources of water are scarce,” she said.

Rehman said the heatwave should be a wake-up call to the international community. “Climate and weather events are here to stay and will in fact only accelerate in their scale and intensity if global leaders don’t act now,” she said.

Experts said the scorching heat being felt across the subcontinent was likely a taste of things to come as global heating continues to accelerate. Abhiyant Tiwari, an assistant professor and program manager at the Gujarat Institute of Disaster Management, said “the extreme, frequent, and long-lasting spells of heatwaves are no more a future risk. It is already here and is unavoidable.”

The World Meteorological Organisation said in a statement that the temperatures in India and Pakistan were “consistent with what we expect in a changing climate. Heatwaves are more frequent and more intense and starting earlier than in the past.”

A heatwave is declared when the maximum temperature is over 40C and at least 4.5C above normal.

That's one of the hottest temperatures ever recorded on Earth in April. pic.twitter.com/AnIxNnjfwU

Over the weekend in India, Bikaner was the hottest place in the country at 47.1C, according to the India Meteorological Department. However, in some parts of north-west India, images captured by satellites showed that surface land temperatures had exceeded 60C—unprecedented for this time of year when usual surface temperatures are between 45 and 55C.

“The hottest temperatures recorded are south-east and south-west of Ahmedabad, with maximum land-surface temperatures of around 65C,” the European Space Agency said on its website.

The high temperatures have put massive pressure on power demand in both India and Pakistan, where people have had to endure hours of power cuts amid the crippling heat. On Friday, the peak power demand in India touched an all-time high of 207,111 megawatts, according to the government.

India is facing its worst electricity shortage in six decades. Power cuts lasting upwards of eight hours have been imposed in states including Jharkhand, Haryana, Bihar, Punjab and Maharashtra as domestic coal supplies have fallen to critical levels and the price of imported coal has soared. In a bid to speed up the transport of coal across the country, Indian Railways cancelled more than 600 passenger and postal train journeys to make way for transportation of coal to power plants.