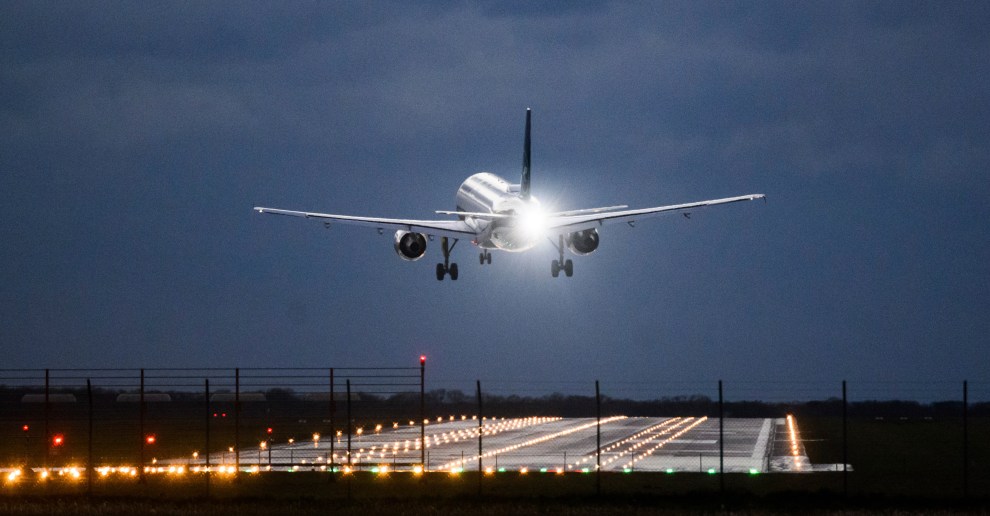 A Lufthansa flight comes in for a landing in Germany.Julian Stratenschulte/AP

Almost 15,000 “ghost flights” have departed from the UK, according to newly revealed official figures.

The ghost flights, defined as those with no passengers or less than 10 percent of passenger capacity, operated from all 32 airports listed in the data. Heathrow was top, with 4,910 ghost flights between March 2020 and September 2021. Manchester and Gatwick were the next highest. There were an average of 760 ghost flights a month over the period, although the data covered only international departure and not domestic flights.

Flying is one of the most carbon-intensive activities people can undertake and ghost flights have angered those campaigning for action on the climate crisis. The German airline Lufthansa recently warned it would have to fly 18,000 “unnecessary” flights by March in order to keep its landing slots at airports. Under current rules, airlines lose their valuable slots if they are not sufficiently used.

However, during the pandemic-hit period covered by the new UK data, the rules that had required 80 percent of slots to be used were completely suspended. Airlines did not have to operate flights to retain the slots, but nonetheless flew 14,472 ghost flights. “Flights may operate with a low number of passengers for a range of reasons,” said the aviation minister Robert Courts, who produced the data in response to a parliamentary question. “Since the onset of the pandemic, the government has provided alleviation from the normal slot regulations. This means that airlines have not been required to operate empty or almost empty flights solely to retain their historic slots rights.”

The Labour MP Alex Sobel, who asked the question and is chair of the net zero all-party parliamentary group, said: “To really tackle the climate emergency we need to ensure that our aviation sector is as efficient as it can be with its carbon output.”

“At a time of climate emergency we need to be drastically reducing our use of fossil fuel, not burning it in empty planes.”

Anna Hughes, at Flight Free UK and whose parliamentary petition on the issue now has 11,000 signatories, said: “At a time of climate emergency we need to be drastically reducing our use of fossil fuel, not burning it in empty planes.”

Slot rules were partially restored in October 2021, requiring 50 percent usage, and this will rise to 70 percent at the end of March. “If more than 14,000 empty flights took off from UK airports when there was no requirement to retain landing slots, how many more will have taken off since?” said Hughes. “Of course, all flights harm the climate, which is why we also campaign for a reduction in demand, a tax on aviation fuel and more affordable trains. But preventing planes from flying empty should be an easy win for policymakers and the climate.”

Tim Johnson at the Aviation Environment Federation said: “Information [on ghost flights] is hidden from public view, with airlines avoiding scrutiny by claiming the data is proprietary. No doubt airlines fear reputational damage, but the public and consumers should be informed. It shouldn’t take a parliamentary question to expose the scale of this wasteful practice.”

“The number of flights may be small in comparison to the overall total, but the effects on our climate add up when you consider the average short-haul flight emits between 13 and 20 metric tons of CO2,” he said.

The Guardian asked the Department for Transport for data on ghost flights in January, but was told the DfT did not hold this data. The Civil Aviation Authority, which provided the new data to the government, refused a freedom of information request from the Guardian, saying it did not have the consent of the airlines to release it. Slot rules are monitored and enforced by a company called Airport Coordination Limited, but it told the Guardian passenger numbers on flights could come only from the airlines themselves.

British Airways, Virgin Atlantic, and easyJet told the Guardian they did not operate ghost flights to retain slots, but declined to provide data on the occupancy of their flights.

“The effects on our climate add up when you consider the average short-haul flight emits between 13 and 20 metric tons of CO2.”

A spokesperson for Virgin Atlantic said: “Covid-19 had an unprecedented impact on customer demand, with wide-ranging global restrictions that limited international travel. For three months during 2020, Virgin Atlantic did not operate any passenger flights. Any lower-occupancy flights that operated outside of this window were not ‘ghost flights’—they supported the global movement of people including returning foreign citizens and repatriated UK citizens.”

Both airlines said the increase in the required slot usage to 70 percent, the highest in the world, would lead to low-occupancy flights. Luis Gallego, the chief executive at IAG, BA’s parent company, said: “This decision would force airlines to operate flights with low load factors, which will generate unnecessary CO2 emissions. This is bad for the environment and detrimental to aviation’s efforts to tackle climate change.” Ryanair did not respond to requests for comment.

Tim Johnson said the slot system was unsustainable and outdated and that reform was needed, adding “Slots at congested airports can exchange hands for millions of pounds each so there are very strong incentives for airlines to keep using them, even when passenger demand is very low. The government should rule out airport expansion and instead focus on slot reform and other efficiency improvements.”