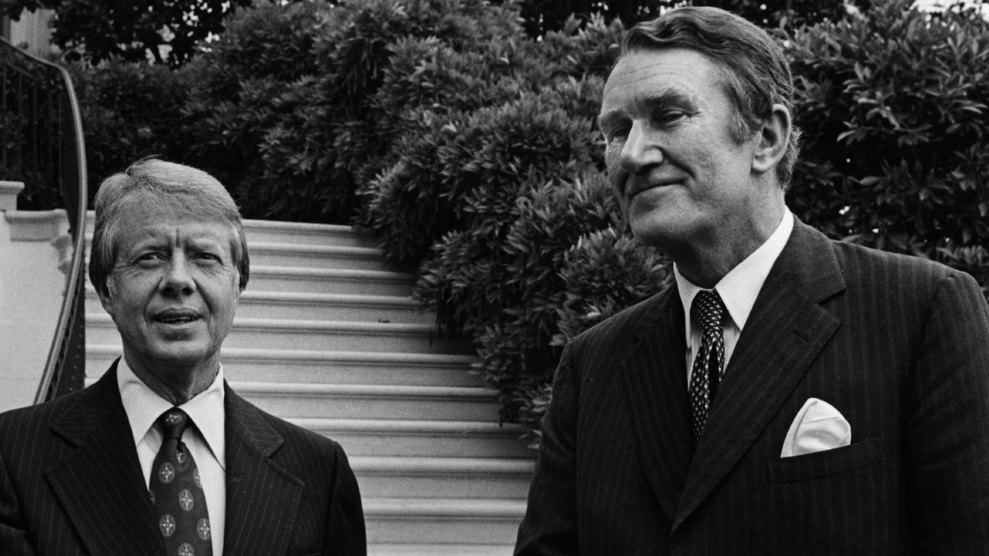 The report was stamped CONFIDENTIAL twice on each page, with the customary warning it should “not be released to any other government except Britain, Canada, NZ and US.”

About 40 years ago this week, the spooks at Australia’s intelligence agency, the Office of National Assessments (ONA), delivered the 17-page report to prime minister Malcolm Fraser.

The subject? “Fossil Fuels and the Greenhouse Effect.”

Michael Cook, the agency’s director general, wrote in an introduction how his team had looked at the implications of rising levels of carbon dioxide in the atmosphere “with special reference to Australia as a producer and exporter of coal.”

Cook wrote: “Scientists now agree that if such emissions continue it will some time in the next century lead to a discernible ‘greenhouse effect’ whereby the Earth’s atmosphere becomes measurably warmer with related climatic changes.”

From the start, Australian officials were seeing the climate change issue through the prism of fossil fuels.

The agency had several warnings for the Fraser government, but central to the concerns was the potential for the country’s coal exports to be affected.

Those concerns from high levels of government show that from the beginning, the country was seeing the climate change issue through the prism of its fossil fuels.

There were “potentially adverse implications” for the “security of Australia’s export markets for coal beyond the end of the century.”

About 16 years after the ONA report, the Howard government signed the Kyoto protocol to limit greenhouse gas emissions. John Howard, who was treasurer when the ONA report was released, later refused to ratify that Kyoto deal, saying it would damage the country’s industries, including coal.

ONA was predicting in 1981 that tensions were likely. Sooner or later the “carbon dioxide problem” would “arouse public concerns and so engage the attention of governments.”

If there wasn’t cost-effective technology “to reduce the carbon dioxide problem” by the end of that century, then concerns could “culminate in pressure for action to restrict fossil fuel usage.”

There was no “anti-fossil fuel lobby” yet that could be compared to “anti-nuclear groups” but some environmental organizations were starting to express concern. Public attention was only going to increase as more scientific results were published “and are sensationalized by the press and others.”

But in a concluding sentence that could be commenting on the Morrison government’s current defense of fossil fuels from a distance of four decades, the report says: “Australia could well find its export market particularly vulnerable to international policies aimed at limiting the use of coal.”

Dr Robert Glasser, head of the climate and security policy centre at the Australian Strategic Policy Institute, said: “It’s the job of intelligence agencies to anticipate these long-term threats and then alert the government. “In that respect, they were doing their job.”

Sooner or later the “carbon dioxide problem” would “arouse public concerns and so engage the attention of governments.”

The existence of the ONA report—sent to Fraser on 25 November 1981—is still not widely known. Scientists working on the issue at the time said they had never seen it until the Guardian sent them a copy. Australia’s longest-serving science minister, Barry Jones, who took up his ministerial role in 1983, also said he had no recall of it.

Glasser says those who have followed the science over decades might not be surprised that Australia’s intelligence was exercised by climate change 40 years ago. “The science has been clear in terms of a general direction ever since the 1970s—a decade before this report. But we now know the impacts.”

But he says despite the country’s intelligence agency first engaging with the issue 40 years ago, Australia is still “way behind” on the security risks being posed by climate change. “We are failing to assess the climate and security risks generally, not just in Australia where we can see these simultaneous record-setting compounding events, but even in the region it’s a major security issue.”

“The document was amazingly prescient and remains accurate in its essentials,” said Hamilton. One of the first people outside government to see the document was likely Prof. Clive Hamilton, who says he was handed it by a “senior public servant” while he was researching his 2007 book Scorcher, on the “dirty politics of climate change.”

“It was one of those extraordinary things a researcher occasionally stumbles upon. Almost no one seemed aware of the report. It was just gathering dust on a shelf somewhere.”

As well as forecasting problems for the country’s coal industry, the ONA report included qualified forecasts of the potential impacts on the climate. The area where cyclones could hit could extend as the tropics expand. Sea levels could rise, plants might grow quicker and the polar regions would warm much faster.

If CO2 levels doubled in the atmosphere, the ONA thought this could cause between 2 C and 3 C of warming. That’s within the range of the UN’s latest assessment.

There would be global winners and losers, the report said. Canada’s wheat-growing belt could grow, gaining area from the USA as the climate shifted. A loss of permafrost in the USSR and Canada could deliver more agricultural land (permafrost is now melting, with concerns about the release of large amounts of greenhouse gases that could further raise temperatures).

If CO2 levels doubled in the atmosphere, then the ONA thought this could cause between 2C and 3C of warming. That estimate—from 40 years ago—is within the range of the UN’s latest assessment.

But the science and the concerns among Australia’s top scientists had been building well before the ONA report dropped on Fraser’s desk.

Some of the data in the report was drawn from the work of Dr. Graeme Pearman and colleagues at CSIRO. Pearman is a pioneering climate scientist who started working on the issue in the early 70s and remembers speaking to ONA staff at the time.

“I knew they were aware of the issues but I didn’t know how they would play that game,” says Pearman, who is now aged 80 but who saw the report for the first time this week. “The report does reflect pretty well the state of our scientific understanding at that time. Where it perhaps falls down is that there seems to be no real attempt to evaluate the risks associated with what may unfold.”

The CSIRO had started measuring CO2 levels in the air using instruments in a wheat field in Rutherglen, Victoria, in 1971. The following year, Pearman and colleagues had put air-sampling equipment on planes—some commercial and some government-owned. More than 3,500 samples were taken.

Pearman was curious about CO2 measurements that had been taken continually since 1958 in Hawaii by pioneering climate scientist Charles David Keeling, of the Scripps Institution of Oceanography in California. To Pearman’s amazement, the amounts of CO2 in the air above the wheat field and from the aircraft instruments were almost identical to Keeling’s findings from Hawaii.

In 1974, Pearman took the Australian air samples in six steel flasks across the world, visiting Keeling’s laboratory in California as well as other scientists doing CO2 measurements in Sweden, Canada, American Samoa and New Zealand.

In 1976, the Australian Academy of Science published a Report of a Committee on Climatic Change that mostly dealt with natural variations in the climate.

But that report included a chapter on “man’s impact on climate.” All past climate changes had been due to natural events “on an astronomic or global scale,” the report said. But then came this sentence: “Human activities are now developing in ways that could have an appreciable effect on the climate within decades.”

Four years later, and one year before the ONA report, Pearman edited a book—Carbon Dioxide and Climate: Australian Research that summarized the work going on in Australia. How were the levels of CO2 changing? What could this mean for rainfall? How would plants respond?

“The potential significance of a CO2-induced climatic change is large,” wrote Pearman, but so too were the uncertainties. A lot more work needed to be done.

“It is fascinating and remarkable to read how this was being viewed [by the intelligence agency] only 10 years after we started our CO2 and climate work at CSIRO,” says Pearman.

Australia’s longest-serving science minister from 1983 to 1990, Barry Jones, could not recall ever seeing the ONA report, but he wasn’t particularly impressed. “I think it’s pretty ordinary,” says Jones, whose latest book is called What Is to be Done: Political Engagement and Saving the Planet.

“They imposed on themselves a very narrow terms of reference,” he said, and was puzzled why the report mentions other greenhouse gases but ignored methane.

Prof. Ian Lowe was lecturing students on the future of energy supply at Griffith University in the early 1980s. He also hadn’t seen the ONA report before. “It’s stamped confidential top to bottom. I was surprised how accurate it was, though,” he said.

“What’s politically interesting is there was absolutely no response to this warning.”

“The spy agency thought it was important enough to draw it to the attention of our political leadership largely because of what they saw as the commerce implications for the Australian export markets for coal.

“But what’s politically interesting is there was absolutely no response to this warning, even though the expansion of fossil fuels was tragically compromised.”

Author and academic Dr. Jeremy Walker, of UTS in Sydney, is researching the history of climate science and energy policy. He’s been reviewing the ONA report as part of a wider project.