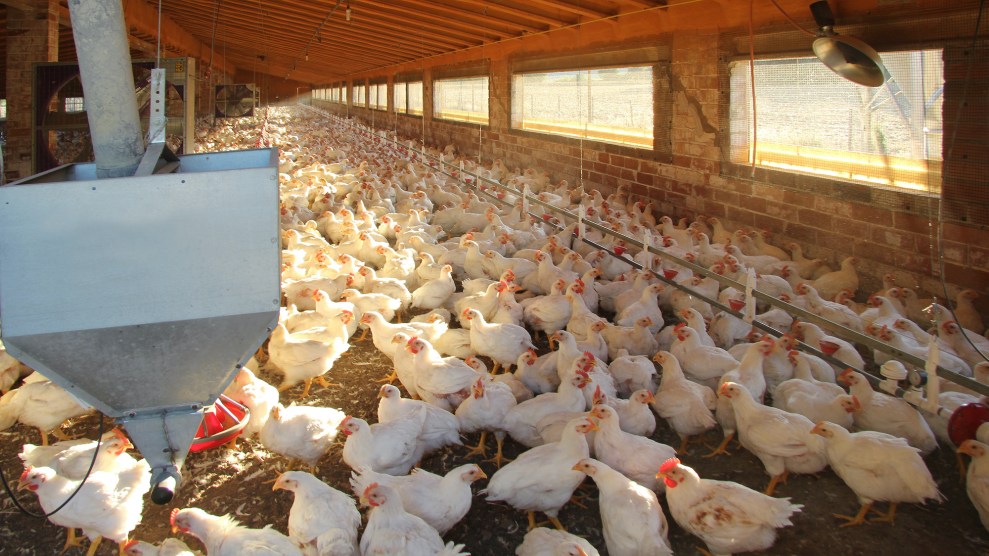 This story was originally published by the Food and Environment Reporting Network and the Capitol Forum.

In 2003, Rusty and Trina McClendon quit their jobs and put everything they owned up as collateral for a $1.4 million loan to build eight chicken houses, capable of raising a million chickens a year. With a contract from Sanderson Farms, now the nation’s third-largest poultry company, the couple got to work in Magnolia, Mississippi, where Rusty had 350 acres. Their only child, Dallas, was just 7 at the time, and his childhood weekends, holidays, and summers were spent working on the farm.

“We put our life on the line, and we do it because we love doing it,” said Trina.

It was a decision that came with considerable risk. Decades of mergers and vertical integration have left the poultry industry dominated by a handful of companies. Those companies have near-total control over the contract farmers, determining everything from the types of birds they raise to what those birds are fed, how they’re medicated and how and when they’re slaughtered. The farmers don’t own the chickens but any losses are the farmer’s responsibility. The typical US grower has over $1 million in loans and the take-home pay is often a far cry from what the company advertises during recruitment. In the years before Rusty died, Trina said, they had negative cash flow for at least part of the time, and were relying on credit cards for groceries and other household expenses.

But the McClendons made it work. Their farm is one of the best performing in their region, consistently ranking in the top five in the tournament system, the scheme through which poultry farmers are paid bonuses, or assessed penalties, based on how well they perform compared to other farmers. Their farm produces mainly broilers, large chickens raised for their meat.

Then, in 2017, Rusty died unexpectedly at age 58, leaving the family reeling. Before he died, Rusty made a promise to his son. “This is your inheritance,” Dallas said, quoting his father. “If you never have anything, you have this farm to fall back on.” Trina hoped she could make good on that promise.

By 2020, thanks to Rusty’s life insurance policy and a few extra flocks, Trina had paid off the loan. Now, at 58, she could finally start saving for retirement. After Rusty’s death, Trina had signed another 15-year contract with Sanderson. The 12 remaining years on the contract will take her to age 70. That was the plan: Grow chickens until she turned 70 and retire on the profits. It seemed like she had weathered the storm.

Trina’s retirement plan began to crumble in early August, when Sanderson Farms announced a base pay cut for its growers throughout Mississippi. The cut, which amounted to 9-percent per flock (not counting bonuses or penalties), would cost the McClendon farm nearly $45,000 a year and force it to operate with slimmer margins, possibly even at a loss.

The news came two days after Cargill Inc., the global food company, and Continental Grain Co., a major food and agriculture investor, announced a $4.5 billion agreement to acquire Sanderson Farms. The move would effectively merge Sanderson, Mississippi’s only Fortune 1000 company, and Wayne Farms, a poultry company owned by Continental, which also has a significant presence in the state. The deal would give Sanderson and Wayne Farms 15 percent of the US poultry market and would increase market share of the top three chicken processors to over 51 percent. It is scheduled to close as soon as the end of the year.

In Congress, where agriculture industry concentration has become a growing concern, Sen. Chuck Grassley, an Iowa Republican, wrote the Justice Department’s antitrust division, saying the deal would further “frustrate competition and reduce marketing options.” Ongoing class action suits allege that poultry companies, including Sanderson and Wayne, have colluded to lower growers’ wages. (Those suits are unrelated to the Cargill-Continental deal and the proposed pay cut by Sanderson that Trina and the other farmers are resisting.) The industry also is under scrutiny in the DOJ’s ongoing criminal price-fixing probe, though neither Sanderson nor Wayne have been implicated.

Growers across Mississippi objected to the pay cut, complaining to the company and calling their local representatives. When Sanderson representatives showed up at farms around the state with the new contract, Trina refused to sign, as did several other farmers in her region who preferred to remain anonymous for fear of retaliation. Trina said company representatives told her “the cut was happening whether I signed or not.”

Trina claims she’s already being punished for refusing to sign. Historically, her farm raised broilers. But after she objected to the lower price, her next flock was Tray Pack chicks, smaller birds with a lower payout than broilers. When she asked for an explanation, the company’s emailed response said it was due to “the effects of the recent hurricane.” The company insists that the change was “structured to be equivalent” to Trina’s previous pay.

The day after announcing the pay cut, Sanderson withdrew it. On Aug. 19, however, the company again proposed a new contract with a pay cut. Again, farmers objected.

But they were rattled. Trina believes the pay cut and the merger are inseparable—the only reason Sanderson proposed the cut was because the merger would leave growers with little choice but to accept the new terms, she says.

According to a Sanderson official with knowledge of the situation, the proposed rate change was part of a series of adjustments the company had made since 2018 at several Mississippi processing plants to respond to both market demand and to the pandemic—not a power grab connected to the merger as farmers fear. The official insists that the pay cuts were structured to be revenue neutral over the course of a year, so that even if a farmer made less on their current flock—when the change was announced—they would make up for it with reduced time between flocks and bigger flocks as the company returned to full capacity.

“All these pay rates are market driven, driven by pandemic, driven by demand from retail customers,” said the official. “Our goal is to pay more versus the competition when we look at our benchmarking and we can see what other people pay growers based on that benchmarking data and we try to stay ahead of the curve.”

On Sept. 13, with the proposed pay cut still on the table, farmers representing 45 farms gathered in a meeting hall near McComb to discuss what to do next. They decided to form what they’re calling the Mississippi Poultry Growers Alliance, and compiled a list of demands for Sanderson. In addition to reversing the pay cut, the farmers want more transparency, better working conditions, cost of living increases and an end to the tournament system.

Trina emphasized that the alliance is about more than the pay cut; it’s also about improving the standard of living for farmers and making the work viable. A 2014 survey found that among farmers whose sole income is raising chickens, 71 percent live below the poverty line. And Trina thinks it’s only gotten worse in the intervening years.

Among farmers whose sole income is raising chickens, 71 percent live below the poverty line.

By going public, Trina and the other farmers are taking a significant risk. Historically, poultry growers who complain experience retaliation, often losing their contracts. (With that in mind, the McClendons are represented by lawyers at the Government Accountability Project, a nonprofit that protects whistleblowers.) Among the farmers’ demands was a call to stop fear tactics. “Growers are indebted to the bank and are forced to bow to Sanderson because they can lose everything they own,” the alliance farmers wrote.

On Sept. 17, Trina and the other growers received yet another contract from Sanderson, rolling back the pay cut again. In a written explanation to farmers, Sanderson insisted that the “pay rate adjustment” was “meant to be revenue neutral … and reflect returning our plants back to full production in mid-August” after the pandemic disruptions. The company said that growers would have received more birds per flock to compensate for the change. But growers insisted the adjustment would still have amounted to a pay cut, even with additional birds.

Trina hopes the uproar over the proposed pay cut will bring renewed political and antitrust scrutiny to the Sanderson-Wayne merger.

Sanderson insists the proximity of the proposed rate change to the merger announcement was coincidental but the timing raises questions about competition for growers in Mississippi. That’s especially the case for the area around Laurel, Mississippi, where Sanderson and Wayne operate processing plants just five miles apart. The merger would decrease the number of companies competing for contract growers in that region—and possibly result in lower wages, although Wayne is actively exploring a sale of its Laurel processing plant in an effort to address the overlaps.

But farm and anti-monopoly advocates say that this divestiture does not address the bigger problem of consolidation in agriculture. “These companies don’t compete against each other anymore,” said Joe Maxwell, president of Family Farm Action, a Missouri-based nonprofit. “This is about extracting a great amount of wealth out of that supply chain.”

On Sept. 17, Rural Advancement Foundation International (RAFI-USA) sent a letter to the Department of Justice’s antitrust division on behalf of poultry growers in Mississippi, enumerating grower complaints and asking the agency to closely scrutinize the proposed merger.

“There has been no transparency or communications with the growers about what is going to happen to their current contracts and they need some assurances that they will not be shut down or forced out of business when the buyout is complete,” the letter said.

The Biden administration has shown renewed interest in the concentration issue, especially in the meatpacking industries. In a recent report the administration wrote, “There’s a long history of these giant meat processors making more and more, while families pay more at the grocery store and farmers and ranchers earn less for their products.”

“This is about the control of food being consolidated down to a handful of big companies.”

On Capitol Hill, the Senate Judiciary Subcommittee on Antitrust has held several hearings on concentration in animal proteins with senators from both parties criticizing the status quo.

Trina worries, though, that because the farmers have won this round with Sanderson—staving off the pay cut, at least for the moment—they’ll lose interest or nerve or both. Already she said she’s seen a drop-off in attendance at subsequent meetings of the poultry growers alliance.

“”It’s not just about me personally or even the growers in my state,” she said. “This is about the control of food being consolidated down to a handful of big companies.”