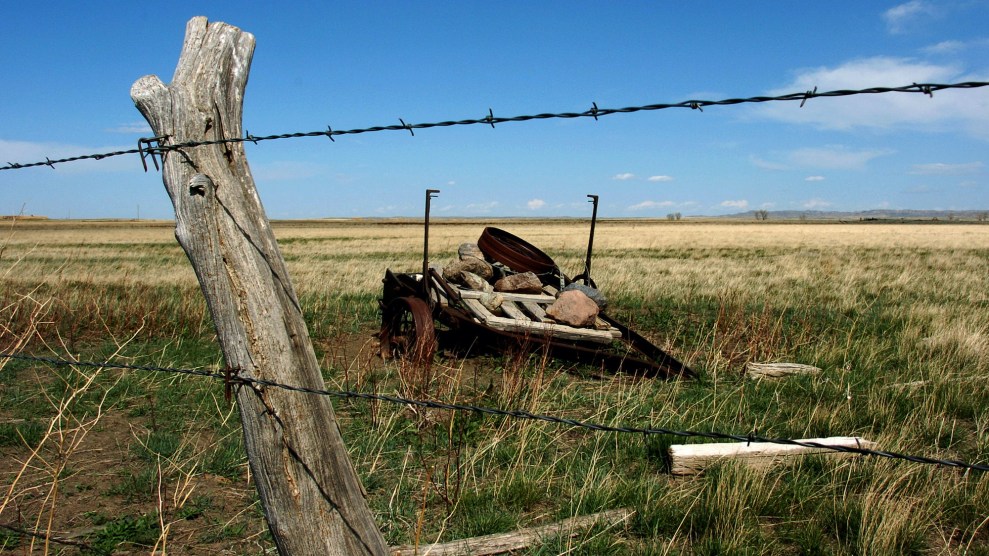 One smoke-tinged July morning on Horse Prairie—a plateau of big sagebrush and dusty washes overlooking Horse Prairie Creek in southwestern Montana—a man sat at the helm of a skid-steer loader. Attached to its front was a spool-like contraption called a Dakota wire winder and post puller. Four volunteers threw up their thumbs—Ready!—and the man flung a switch. The winder spun up, and a stretch of woven wire fence lying on the ground jerked into motion.

Soon, a hundred-plus years of tangled Western history had become a tidy bale.

Andrew Jakes joined the volunteers in a cheer. The group was the last in a two-week parade of helpers who had come out to Horse Prairie, and Jakes believed their hard work wrestling fences would be worth it.

he American West, research shows, has enough fencing to circle the equator 25 times.

Jakes is a biologist with the National Wildlife Federation and an expert on pronghorn antelope. In 2018, he and four colleagues published a paper calling for more research on how fences affect ecosystems. They also coined a term: “fence ecology.” Today, the growing subdiscipline is not just revealing how fences can harm Western wildlife; it’s also informing solutions.

Fence ecology research shows that the West is a wiry place, containing enough fencing to circle the equator 25 times. Sage grouse, peregrine falcons and other birds collide with fences, and ungulates must navigate an endless obstacle course. A 2021 paper found that pronghorn in Wyoming encountered fences an average of 249 times in a single year and changed their behavior around the barriers nearly 40% of the time. Fences often ensnare and kill large animals; woven wire with barbed wire on the top, like that on Horse Prairie, is particularly lethal. Fences also separate mothers from calves, exclude herds from prime habitat and exhaust and injure animals. “Probably a quarter to half of (pronghorn I’ve seen) have scarring at this point, from trying to get under,” Jakes said.

A number of nonprofits, land trusts, ranchers, tribal nations and government agencies have already removed or modified thousands of miles of harmful fences. But because fences are difficult to study, these projects haven’t had much science to guide them. There is no global fence map, as there is for roads; fences are hard to see on satellite imagery. And even as satellite-based mapping improves, researchers say it’s difficult to distinguish between an impassable woven-wire fence and, for example, a dilapidated or smooth-wire fence that’s more permeable to wildlife.

Recently, though, fence ecologists have begun to unravel some mysteries. Using models, they’ve estimated the locations of fences over large areas and painstakingly mapped them in a number of important habitats. And they’re studying the paths of GPS-collared animals: If a mule deer makes a 90-degree turn in a section of roadless rangeland, for example, it could be because of a problem fence.

On Horse Prairie, one of Jakes’ colleagues, Simon Buzzard, combined all three tools—modeling, mapping and GPS-collar data from a Montana Fish, Wildlife and Parks pronghorn study—to identify stretches of fencing that appeared to impede ungulate movement. “We had collars from 40 animals,” Buzzard said. “Many of them stopped right here,” at the 2.1-mile stretch that the volunteers took down in July.

The removal effort was the result of a cost-sharing agreement among the National Wildlife Federation and the landowners on either side of the fence: the Bureau of Land Management and two ranchers. The section that came out is the first of 10 miles of fence that Buzzard and Jakes hope to fix through a National Fish and Wildlife Foundation grant this year.

Still, the sheer scale of fencing in the West presents a daunting challenge, and many questions remain unanswered. For example, how do fences affect the long-term health of wildlife populations? And how do different species learn about and use wildlife-friendly fences? “Until we have a large amount modified and recorded,” said Wenjing Xu, a Ph.D. candidate at UC Berkeley who has led or co-authored several recent fence ecology papers, “we don’t know how well or fast (animals) will respond.”

Back on Horse Prairie, piles of fencing were stacked on a flatbed trailer by noon. The following week, a contractor would put up a four-strand barrier with a smooth top wire 40 inches off the ground—low enough for “jumpers” like elk, deer and moose to go over—and a smooth bottom wire 16 inches above the earth, high enough for pronghorn, as well as calves of other ungulates, to slide under. (Jakes’ research shows an 18-inch bottom wire is even better, but for now, he said, 16 inches is a major step forward.)

“Yesterday, we saw nine elk with one little calf,” Buzzard said to Jakes as they drove across the newly reopened range. “If that old fence had been up, would that calf have been able to cross under?’