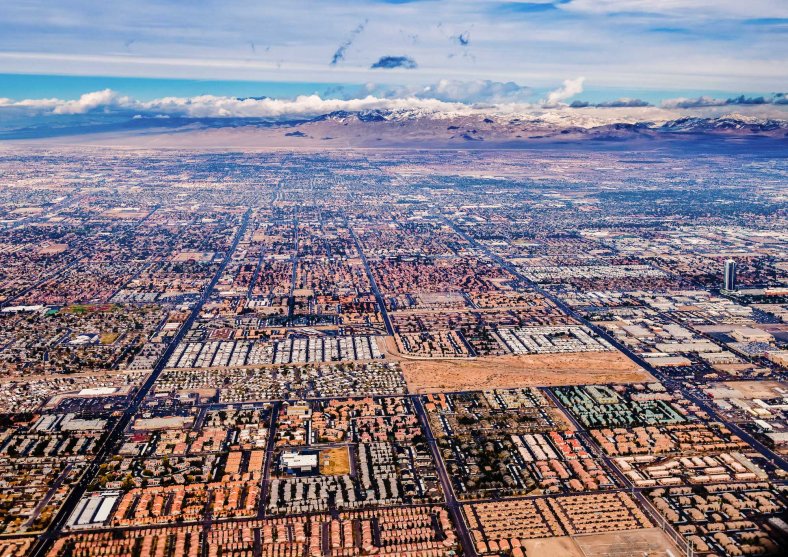 Investigator Perry Kaye jammed the brakes of his government-issued vehicle to survey the offense. “Uh oh this doesn’t look too good. Let’s take a peek,” he said, exiting the car to handle what has become one of the most existential violations in drought-stricken Las Vegas—a faulty sprinkler.

Kaye is one of nearly 50 water waste investigators deployed by the local water authority to crack down on even the smallest misuse of a liquid perilously scarce in the US west, desiccated by two decades of drought. The situation in Las Vegas, which went a record 240 consecutive days without rain last year, is increasingly severe.

“The lake isn’t getting any fuller at this time so we need to conserve every single drop.”

Lake Mead, the vast reservoir that supplies Las Vegas with 90% of its water, has now plummeted to a historic low, meaning Nevada faces the first-ever mandatory reduction in its water supply next year. This looming cutback is forcing restrictions upon the city that has somehow managed to thrive as a gaudy oasis in the baking Mojave desert.

“The lake isn’t getting any fuller at this time so we need to conserve every single drop,” said Kaye, an energetic former US air force serviceman who wears a hi-vis vest and brandishes a badge as he does his rounds searching for violators. He starts his shift at 4am. “A lot of people think because we are government workers we are not out there at that time but we are out 24/7, every day of the year,” he said.

Kaye regularly hands out fines—they start at $80 and then double for each further offense—for the sort of rule-breaking he has spotted in Summerlin, a wealthy Las Vegas enclave where landscapers tend manicured grounds in the soaring heat. Water sprayed on to lawns and plants isn’t allowed to flow off the property, but that day a damaged sprinkler had caused water to cascade into the gutter, where the precious resource is lost.

“Look, we’ve got a little creek or stream here,” said Kaye, as he used his phone to video the water snaking onto the road. “If everyone did this, quite a bit of water would be wasted.”

It’s so hot in Vegas—this July day’s temperature will breach 40C (104F)—that the errant water will evaporate within five minutes. Kaye planted a yellow flag next to the leak as a warning to the homeowners but a few taps on the computer mounted in his cruiser show this property has a previous warning, so an $80 fine will be on its way.

There’s a growing realization, however, that such rules—no watering between 11 am and 7 pm, none at all on Sundays—won’t be sufficient as Nevada is squeezed by a drought that has escalated dangerously in 2021. In June, the state passed a law to rip up “non-functional” public turf in Las Vegas, such as grass planted beside roads or on roundabouts, over the next five years to save around 10% of city water use.

“That is just wasteful—the only person who walks on that is the person who cuts it,” said Kaye, jabbing a finger at a nearby grass verge median. “Some people just want to recreate home, where they grew up with grass.” The new law, along with a financial incentive given to homeowners to replace thirsty grass with more hardy desert plants and rocks, is an acknowledgment that climate change won’t easily allow the imposition of a verdant green oasis upon a bone-dry desert basin.

A city that contains a huge replica of the Eiffel tower, sprawling golf courses, and a simulacrum of Venetian canals complete with gondolas can never be said to fit in with its surroundings. But Las Vegas, called “The Meadows” in Spanish due to its natural springs that were pumped dry by the 1960s, is at least aware of its setting in a place so arid that only a few small creosote bushes and tumbleweeds can survive here naturally.

Pellegrino said the recent escalation of the drought has been “very scary” for some Vegas residents, although she insists the water authority has planned for this moment. Lake Mead’s level dropped under 1,075ft in June, barely a third full, triggering what will be the first ever cutbacks under a seven-state agreement on sharing the water from the Colorado River, which is harnessed by the Hoover dam to create the reservoir.

Different states get different water allocations and Nevada is a victim of its depopulated history, getting just 300,000 acre-feet of water a year (by comparison California gets 4.4m acre-feet) under an agreement struck before the Hoover dam was completed in the 1930s. “The joke is that Nevada’s representative was drunk,” said Pellegrino, who was born in 1983, when the state’s population was barely 900,000. It’s now more than 3 million and receives tens of millions of tourists a year.

This small water allocation will shrink by 21,000 acre-feet with the new cuts, although Nevada has made impressive strides in keeping below its low cap, slashing its water use despite the population nearly doubling since the early 2000s. Pellegrino is confident that further savings can be made and scrutiny is being placed upon the water used in Vegas casinos’ ubiquitous cooling systems.

But global heating’s impact upon the west’s snowpack and rivers is unrelenting and the city’s water savings will only go so far. Las Vegas only has a supporting role in its own fate. Three-quarters of allocated Colorado River water is used to irrigate thirsty agriculture, and the overall water supply is more dependent upon the amount of snow melting hundreds of miles away in the Rocky Mountains than some extra marginal savings made in the suburbs.

“Vegas has done great things such as ripping out the grass, but we’ve lost 20% of the flow of the Colorado River since 2000 and another 10% loss by 2050 is completely possible,” said Brad Udall, a water and climate scientist at Colorado State University whose research has focused on the stresses facing the river.

“I worry it could be even more than that, and that should frighten everyone.”

Back in Summerlin, Perry Kaye is also relentless. A house opposite the first offender has broken sprinklers splurging water into puddles on the grass and road. Kaye bangs on the ornate door to inform the homeowner, but no one is in.

“These sprinklers haven’t popped up properly, they are just oozing everywhere,” muttered Kaye. He has been policing water waste for the past 16 years, issuing countless fines in that time. “I had hoped I would’ve worked myself out of a job by now. But it looks like I will retire first.”