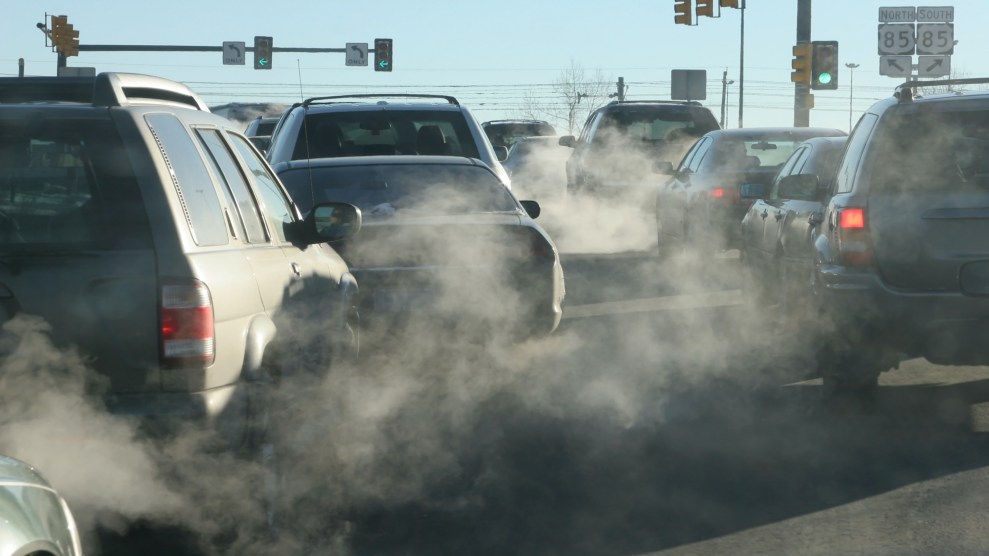 This story was originally published by Grist and is reproduced here as part of Climate Desk.

Corporate America has made a slew of pledges to reduce its emissions over the past few years. Today, 92 percent of the companies on the S&P 100, an index of leading U.S. stocks, have announced intentions to reduce at least some of their carbon emissions, according to the corporate sustainability advocacy nonprofit Ceres.

But do these companies actually plan to change their business practices, and in some cases their entire business models, to meet the scale of the challenge? Or are these pledges just greenwashing?

A telling way to assess how serious companies are about meeting their own goals is to look at whether they are lobbying in statehouses and in Washington for the policy changes that would make reducing emissions easier and cheaper. But a new report from Ceres published on Tuesday finds that over the past five years, only 40 percent of those S&P 100 companies have engaged with lawmakers at the state or federal level to advocate for science-based climate policy.

“Those companies that are not actively lobbying for science-based climate policies are effectively working against themselves.”

“Those companies that are not actively lobbying for science-based climate policies are effectively working against themselves,” said Steven Rothstein, managing director of the Ceres Accelerator for Sustainable Capital Markets, in a statement. Rothstein said they were “risking both their reputations and their financial performance.”

The report also looked at companies’ memberships in trade groups that have actively fought climate policy, like the U.S. Chamber of Commerce. Nearly three-quarters of the companies were members of that group, and only 7 percent of companies disclosed that they have pushed the Chamber to change its position on climate change. Apple is the only company that left the group over its climate positions.

Many of the companies on the list are oil and gas companies and utilities, whose lack of enthusiasm for climate policy is unsurprising. But companies’ low engagement across the board is significant. Earlier this year, Senator Sheldon Whitehouse of Rhode Island told Grist that the absence of corporate lobbying in favor of climate policies on Capitol Hill makes passing them much more difficult because there’s no counterbalance to the aggressive and deep-pocketed campaigns against such policies by the fossil fuel industry.

In June, an Exxon lobbyist was caught on tape describing the company’s aggressive fight to scale back the climate provisions in the infrastructure bill that President Joe Biden is trying to pass, including weekly meetings with Senator Joe Manchin of West Virginia. By contrast, companies like Apple and Google tend to sign letters supporting climate policy organized by groups like Ceres, like a recent one calling for a clean electricity standard. But there’s no evidence these corporations are whispering into influential senators’ ears about the burning planet on a regular basis. Ceres found that out of the 40 percent of the S&P 100 companies that have engaged with policymakers on climate since 2017, 14 percent have done so solely as a part of corporate cohorts, not taking the time and effort to engage with lawmakers directly.

In some cases, companies aren’t just silent on climate—they have actively lobbied against science-based climate policies like federal fuel-efficiency standards for vehicles and methane regulations for the oil and gas industry. The analysis identified 17 companies whose lobbying has run counter to their internal goals to reduce emissions, including UPS, Ford, and Honeywell.

Since the data covers the past five years as a whole, it doesn’t capture the fact that some companies that previously worked against climate goals have shifted in recent years as pressure from the public and investors has mounted. Ford, for example, is on that list in part because it previously supported former President Donald Trump’s efforts to weaken federal fuel efficiency standards. But the company changed its tune in June 2019 when it agreed to comply with California’s more stringent standards.

It’s also unclear how much corporate climate lobbying will change now that there’s a sympathetic ear in the White House. “There is a notable difference among company’s willingness to be climate advocates under President Biden,” said Anne Kelly, Ceres’ vice president of government relations. Earlier this year, Ford unveiled its new electric version of the iconic Ford F-150 pickup truck with a cameo from the new president himself.

While the overall trends reflected in the new report are not revelatory, the careful analysis of each company’s lobbying history is helpful for investors who are becoming more concerned about the risk of climate change to companies’ bottom lines.

“This report provides a clear roadmap for investors who are demanding that businesses adopt science-based lobbying fully aligned with the Paris Agreement, and companies must take note,” said Adam Kanzer, head of stewardship for the Americas at BNP Paribas Asset Management, in a statement.