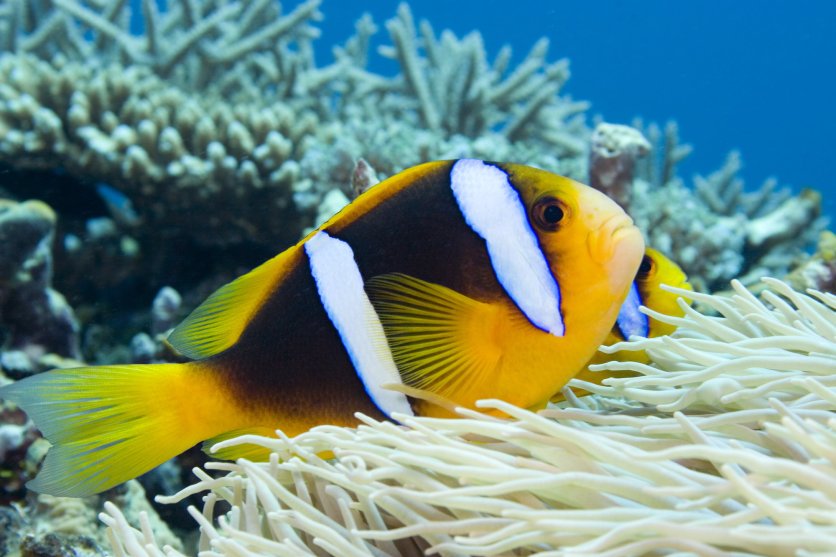 Young clownfish on coastal reefs are dying faster as a result of exposure to artificial light at night, according to new research.

An international team of scientists studying reefs on Moorea, a tiny island of French Polynesia, have found that orange-fin anemonefish—a species of clownfish—exposed for long periods to human-generated artificial light were 36 percent less likely to survive than clownfish living in reefs farther from the coast.

The clownfish that did survive grew 44 percent slower than their counterparts who lived under natural nocturnal lighting conditions.

Stephen Swearer, a professor of marine biology at the University of Melbourne and one of the study’s authors, said Moorea was home to many luxury hotels with bungalows over the water—many of which are intentionally lit at night.

“Rooms have these little windows, like a portal in the floor, so you can turn the light on and look at the fish swimming around underneath,” he said.

More than 20 percent of the world’s oceans are exposed to “ecologically relevant levels of artificial light.”

For more than 18 months, the researchers monitored young clownfish living in anemones close to shore, where they were perpetually exposed to light pollution, and fish who lived in anemones away from areas inhabited by humans.

Swearer said it was unclear why light-exposed fish had a reduced growth rate and were more likely to die. One possible explanation for the increased death rate was the light attracting predators. Another was that long-term exposure resulted in adverse physiological effects on the clownfish.

“Basically, these fish are just really tired, not being able to lower their activity levels at night,” said Swearer. “They may then behave in ways that mean they have less energy to avoid predation.”

Swearer said more research was needed on the effects of light pollution on other marine animals. More than 20 percent of the world’s oceans were exposed to “ecologically relevant levels of artificial light,” he said.

The harmful effects of artificial light on turtle hatchlings is already well established, as sea turtles rely on the light of the moon and stars for navigation. Hatchling strandings and deaths have previously been attributed to light pollution in north Queensland.

Swearer said artificial light near coastal reefs needed to be better regulated. “There are ways in which you can light so that you’re not resulting in conditions that lead to public safety concerns [for humans], but that also can mitigate the risk that they might pose to wildlife,” he said.

“We can make sure populations of species that we care about have refuge from that stressor.”