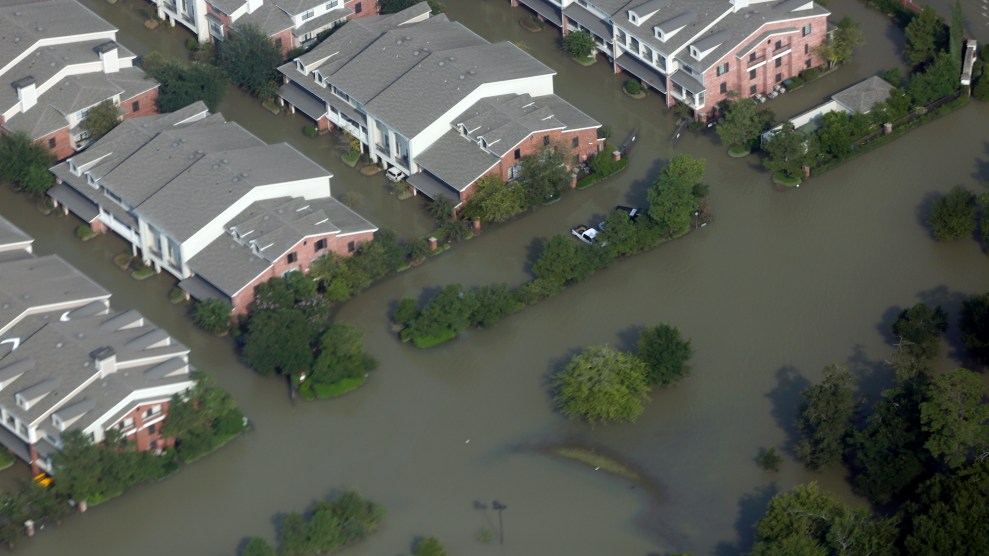 When Hurricane Harvey struck Texas in August 2017, it dumped 27 trillion gallons of rain on the greater Houston region, submerging about a quarter of the metropolitan area. To this day, it remains the wettest storm on record in the United States. The hurricane, which research would later find was 15 percent more intense and three times as likely due to climate change, caused financial hardship for thousands of families.

Less than a fifth of homeowners in counties hit by Harvey had flood insurance. Mortgage delinquencies soared. The number of borrowers who missed more than three mortgage payments tripled in the wake of the storm. Property values took a hit, too: A study by Freddie Mac, one of two mortgage loan companies backed by the federal government, found that homes in Houston’s 100-year floodplain sold for about $17,000 less than comparable homes outside the floodplain after the storm. The financial distress was felt most acutely by low-income families and communities of color. Researchers found that homeowners in neighborhoods with a larger share of minority residents were less likely to qualify for loans and federal grants to rebuild after Harvey.

Events like this have the potential to kneecap the broader US economy, in part because mortgages are packaged into valuable financial products—so-called mortgage-backed securities—that are bought and sold on Wall Street. After the storm, market analysts found that $30 billion worth of assets were suddenly at risk of default.

While that worst-case scenario did not play out, a similar pattern has emerged after subsequent hurricanes. Environmental advocates and financial experts have long warned that the growing costs of natural disasters threaten the stability of financial markets and disproportionately burden communities of color.

The most vulnerable homebuyers may be funneled into the areas most susceptible to climate change, and where existing homeowners may experience downward mobility.

The federal government is now devoting resources to the issue. The Federal Housing Finance Agency, or FHFA, an independent regulatory agency tasked with overseeing Freddie Mac and its sister organization Fannie Mae after the 2008 financial crisis, is beginning to formally examine the risks climate change is bringing to the housing market. As it does so, it faces a fundamental challenge: how to respond to climate risks while fulfilling its mandate to ensure the availability of affordable housing for low-income borrowers.

If the FHFA and other federal agencies succeed in increasing public understanding of climate-related risks and creating uniform mortgage lending standards around the issue, that could lead to property values declining in high-risk areas that are often home to people of color—places like South Chicago, Illinois; North Charleston, South Carolina; and formerly redlined parts of Sacramento, California. Vulnerable homebuyers may be funneled into the very communities most susceptible to climate change, and existing homeowners of color who purchased their houses when these risks were not as well understood could experience downward mobility.

Given that housing is the primary way that most Americans build wealth, the FHFA will have to walk a tightrope if it is to design policies that address the risks of climate change without unfairly burdening communities of color by devaluing their most valuable financial assets: their homes.

“We don’t want to create a modern form of redlining where places that are affordable are places that are exposed to higher risk and places where no one wants to land,” said Rachel Cleetus, a policy director with the Union of Concerned Scientists, a science advocacy nonprofit.

The FHFA held its first listening session on climate risk earlier this year and solicited comments from the public about how it might go about managing climate risk in Fannie Mae and Freddie Mac’s portfolios. The more than 50 comments submitted in response, which the agency has made publicly available, come from bankers, fair housing advocates, climate data analytics firms, and academics. Broadly, the comments stress the need for transparent and standardized data on risks stemming from flooding, wildfires, extreme heat, and other climatic changes. As it stands now, a small group of sophisticated analytics firms are packaging climate data into proprietary models and selling them to hedge funds and institutional investors—and leaving everyone but their customers in the dark about how these powerful financial interests are quantifying climate risk.

The result is what researchers and policy wonks are calling asymmetric information, a situation in which a small group of market players have access to crucial knowledge that they profit from to the detriment of other parties. In this case, insurance companies and wealthy financial institutions have access to topline climate data and are able to steer their investments away from high-risk areas, while the government and most ordinary investors are largely in the dark. A similar dynamic played out in the run up to the 2007 US housing market crash, when investors were unaware of the underlying risks within mortgage-backed securities.

“I’m incredibly concerned about information asymmetry,” said Lindsay Owens, a fellow at the Roosevelt Institute and a former economic advisor to Senator Elizabeth Warren. “You’re already starting to see some of the larger banks who are investing in this [climate] data are starting to have a leg up on consumers.”

The legacy of redlining means that communities of color—particularly Black Americans—tend to live in neighborhoods with fewer trees and inadequate stormwater infrastructure.

Two studies published last year suggest that lenders are already capitalizing on the asymmetry and moving climate-related risks off their books. One found that local lenders issued fewer loans in increasingly flood-prone areas—except when they could pass on those loans to Fannie Mae and Freddie Mac, suggesting that these lenders were taking climate risk more seriously (or understanding it better) than the government-backed entities. A second study analyzed lending by local banks in coastal counties and found that more than half of the loans sold to Fannie and Freddie were within an area that would flood after one foot of sea-level rise.

As a first step, Owens and other researchers want to see the FHFA make climate risk knowledge accessible to the average homebuyer. However, they warn that doing so could exacerbate inequities. For one, climate risk is disproportionately borne by communities of color. The legacy of redlining and segregation means that communities of color—and particularly Black Americans—live in neighborhoods that have fewer trees and inadequate stormwater infrastructure, making it more likely that they bear the brunt of flooding and extreme heat.

When these risks are quantified and made easily accessible to homebuyers, it’s likely to cause a devaluation of homes, leading to a loss of wealth in these communities. To counteract price shocks, Cleetus, Owens, and others advocate starting conversations at the local level about increasing investments in climate-resilient infrastructure and developing plans to retreat from high-risk areas.

In comments submitted to the FHFA about climate risks, Fannie Mae and Freddie Mac pointed to their collaborations with academics to evaluate flooding and other climate risks, as well as their green bond programs, which package energy-efficient homes into “green” financial products. A spokesperson for Fannie Mae did not respond to specific questions about undertaking climate stress testing and scenario analysis, and the company’s written comments emphasized that it would be “premature” to use climate models in risk assessments.

Chad Wandler, a spokesperson for Freddie Mac, said that the company periodically analyzes risk using third-party natural catastrophe models “that estimate the physical damage arising from a range of simulated historical and potential events such as floods, hurricanes, and earthquakes.” Freddie Mac has also assessed flooding risk outside of flood zones in Federal Emergency Management Agency maps, which are outdated, he said.

“People who already face great barriers getting into the housing market will face even greater barriers.”

Fannie and Freddie already price some risks into home loans through so-called “guarantee fees.” Borrowers with lower credit scores, who are seen as more likely to default, are charged higher interest rates. Similarly, investment properties and condominiums incur higher fees. In comments submitted to the FHFA, Mark Hanson, a senior vice president at Freddie Mac, said that the company “urge[d] FHFA to allow [Fannie and Freddie] to prioritize climate risk in relation to other risks facing the company using a risk-based approach.”

Fair housing advocates, however, warned against simply adding climate-related risk to the list of other risks priced at the loan level. Given that high-risk areas are often formerly redlined neighborhoods and home to communities of color, adding a pricing adjustment to loans based on climate risk will lead to inequitable outcomes, they argue. Instead, they say that Fannie and Freddie should push up interest rates to spread risk across the broader mortgage market, so that individual homeowners aren’t shouldering the costs of climate change.

“Forcing individuals to bear those costs does not advance equity,” said Debby Goldberg, the vice president of housing policy and special projects at the National Fair Housing Alliance. “People who already face great barriers getting into the housing market will face even greater barriers, and we’ll increase the racial homeownership gap and the racial wealth gap.”