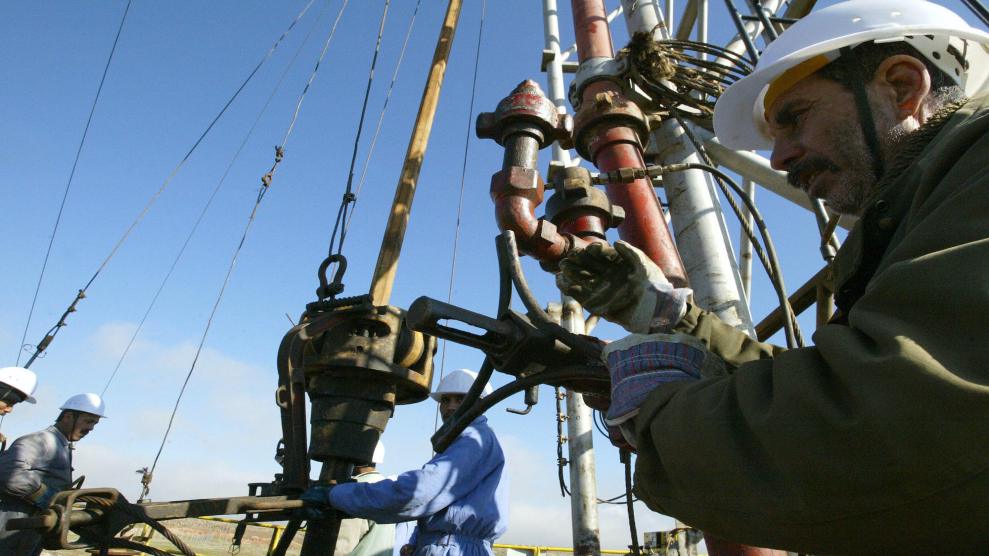 Oil workers in Kirkuk, Iraq, in 2004. Karim Sahib/AFB via Getty

Oil-dependent countries that are not preparing to adapt to the global shift away from fossil fuels risk their own stability, warns a new report.

Algeria, Iraq and Nigeria are the most vulnerable to “a slow-motion wave of political instability,” according to the risk analysts Verisk Maplecroft. “With the energy transition accelerating, and Covid-19 leveling out any recovery oil made over recent years, time is running out for a number of countries that have failed to diversify their economies away from exporting fossil fuels,” said the report, published late last week.

Chad and Kazakhstan were also identified as countries with a high risk of political upheaval as energy transition engulfs their economies. The west African states of Angola, Gabon, Congo, Cameroon, and Equatorial Guinea, with “fragile autocratic or semi-autocratic political systems,” were also named as high risk by the analysts.

“Authoritarian political stability is anything but stable over the long term.”

The researchers considered factors including external break-even costs, countries’ capacity to diversify, and political resilience. Most oil-producing states failed to diversify between 2014, when oil prices plummeted, and the coronavirus pandemic, the analysts found. The situation in some countries has worsened as exports have dropped and foreign currency reserves have been depleted.

The situation is similar whether or not states are members of the OPEC oil cartel, as most exporters increased production to compensate for revenue shortages. Currency reserves dwindled, as in Saudi Arabia, for example, which “has burned through almost half of its 2014 dollar stockpile.”

Nigeria and Iraq have already devalued their currencies, in effect “rebalancing their imports and exports at the expense of living standards.”

“Recent devaluations are a harbinger of the bleak options ahead for oil producers: diversify, or experience forced economic adjustments,” the report said.

Franca Wolf, Verisk Maplecroft’s senior analyst, said the energy transition was “critical for the world,” but “a threat multiplier” for countries reliant on exporting oil with little capacity to diversify their economies. “Standing still won’t be an option for these markets—the game has changed,” she said. “Political and public pressure to tackle climate change are the main drivers behind energy transition, as we have seen in the climate protest movement and electoral success of green policies in developed economies.”

Among Gulf states, the United Arab Emirates and Qatar were deemed best equipped to weather the storm. Saudi Arabia and Kuwait are also predicted to be more politically stable, with their resources and economies better positioned to diversify.

But James Lockhart Smith, Verisk Maplecroft’s head of market risk, also raised a caveat over Gulf states. “Authoritarian political stability is anything but stable over the long term and, as lower-for-longer oil prices cut into social spending, additional pressure will pile on these deceptively fragile political systems,” he said.