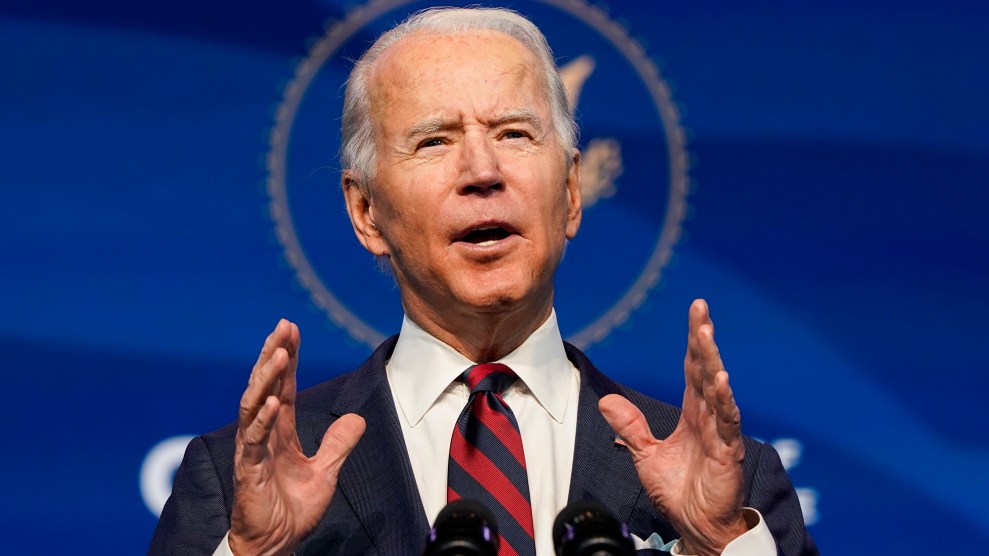 The US needs to commit to slashing its planet-heating emissions by at least half by the end of the decade to address the climate crisis and spur other countries to greater action, a coalition of American environmental groups has urged.

Joe Biden’s administration is set to unveil a new national emissions reduction target at a climate meeting it has convened with other major economic powers on Earth Day, April 22, which it hopes will galvanize countries that are currently dangerously lagging in efforts to stave off disastrous climate change.

A motley selection of environmental groups and leaders have said the US goal must be no lower than a 50% cut in its greenhouse gas emissions by 2030, based on 2005 levels. This will, the groups argue, put America on track to meet Biden’s aspiration of net zero emissions by 2050, as well as provide a major push to countries and businesses that were bereft of American climate leadership during Donald Trump’s presidency.

“The target has to be ambitious enough to show US leadership, but also credible, it can’t just be plucked from thin air,” said Nat Keohane, vice-president for international climate at the Environmental Defense Fund (EDF). “This is ambitious but also feasible. We need to show the US is bringing everything it can to this fight.”

A new EDF report calls for a “whole of government effort” to combat the climate crisis, with all cars sold in the US to be zero emissions from 2035, a clean electricity standard to shift the grid to renewable energy sources such as solar and wind, and new regulations to restrict methane emissions from oil and gas drilling.

Other environmental groups, including the Union of Concerned Scientists, World Resources Institute and National Resources Defense Council, have also rallied to the idea of a 50% cut, along with figures such as Jay Inslee, the governor of Washington, and Michael Bloomberg, former mayor of New York City, as crucial to curb ever-worsening wildfires, floods and heatwaves that are suffered disproportionately by underserved Americans of color.

“We see this important opportunity to bolster equity and fairness,” said Starla Yeh, a clean energy policy specialist at the Natural Resources Defense Council. “The goal is not only achievable but cost effective. The more progress we make this decade, the better off we will be.”

The US first set an emissions reduction target, known in diplomatic jargon as a nationally determined contribution (or NDC), in 2014 during Barack Obama’s administration, vowing to cut emissions by up to 28% by 2025, on 2005 levels. The target by itself does not lower emissions but helps set federal government policy and provides a framework for businesses, cities and states to work towards.

A 50% reduction by 2030 would “be a challenge”, according to Nathan Hultman, director at Center for Global Sustainability at the University of Maryland, who helped design the Obama-era goal, but would be achievable with a “whole of society approach”.

The international credibility of the world’s second largest carbon polluter was severely damaged during the Trump administration, when the US pulled out of the Paris climate agreement and dismantled various rules aimed to reduce emissions. The US’s return to the international fold has come with added expectations, with Laurence Tubiana, a French diplomat and key architect of the Paris agreement, saying the American target should be “at least” a 50% reduction.

“There are broad expectations from America’s allies that the NDC needs to start with a ‘5’,” said Keohane. “There is a level of urgency you hear from folks in the White House that is a sea change from even the Obama administration. I think they are serious in putting out an ambitious marker.”

John Kerry, Biden’s climate envoy, is currently on a trip to Europe to meet leaders in the lead-up to crucial UN climate talks in Glasgow later this year. Kerry met with the British prime minister, Boris Johnson, on Monday and will this week hold talks with officials from the European commission and the French government.

Kerry said the UK was a “strong partner” in facing the climate crisis but that the world’s largest emitters needed to do far more. Before his trip, Kerry had said the world was “marching forward to what is almost tantamount to a mutual suicide pact” by failing to cut emissions quickly enough. China, the world’s largest emitter, recently released a five-year plan that severely disappointed environmentalists.