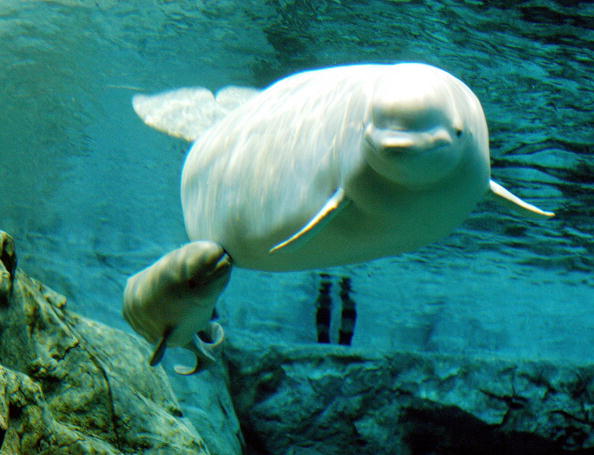 A white beluga whale and her calf. Nagoya, Japan, 2004.AFP/Getty

A natural ocean soundscape is fundamental to healthy marine life but is being drowned out by an increasingly loud cacophony of noise from human activities, according to the first comprehensive assessment of the issue.

The damage caused by noise is as harmful as overfishing, pollution and the climate crisis, the scientists said, but is being dangerously overlooked. The good news, they said, is that noise can be stopped instantly and does not have lingering effects, as the other problems do.

Marine animals can hear over much greater distances than they can see or smell, making sound crucial to many aspects of life. From whales to shellfish, sea life uses sound to catch prey, navigate, defend territory and attract mates, as well as find homes and warn of attack. Noise pollution increases the risk of death and in extreme cases, such as explosions, kills directly.

Carbon dioxide emissions from fossil fuel burning are also making the oceans more acidic, meaning the water carries sound further, leading to an even noisier ocean, the researchers said. But the movement of marine mammals and sharks into previously noisy areas when the Covid-19 pandemic slashed ocean traffic showed that marine life could recover rapidly from noise pollution, they said.

Everything from the tiniest plankton up to sharks sense their acoustic environment,” said Prof Steve Simpson at the University of Exeter in England, and part of the review team. “As a result, the animals have to produce sound to communicate, but also to receive sound.” He said noise pollution was like an “acoustic fog” in the ocean.

“Marine animals can only see across tens of meters at most, and can smell across hundreds of meters, but they can hear across entire ocean basins,” said Prof Carlos Duarte at King Abdullah University of Science and Technology in Saudi Arabia, who led the review. Duarte said major assessments of the health of the ocean were ignoring noise: “Yet the scientific literature, when read carefully, provides compelling evidence of human-caused noise being a major source of disruption to the marine ecosystem.”

“We find that animals are directly stressed by noise as well, and so they make poor decisions that often lead to death.”

The review, published in the journal Science, analysed more than 500 studies that assessed the effects of noise on sea life. About 90% of the studies found significant harm to marine mammals, such as whales, seals and dolphins, and 80% found impacts on fish and invertebrates. “Sound is a fundamental component of ecosystems, [and noise] impacts are pervasive, affecting animals at all levels,” the analysis concluded.

The most obvious impact is the link between military sonar and seismic survey detonations and deafness, mass strandings, and deaths of marine mammals. But many uses of sound can be harmed, such as the hums that male toadfish use to attract females and the honks that cod use to coordinate spawning.

Baleen whales produce calls to help group cohesion and reproduction that can travel across ocean basins, and humpback whales sing complex mating songs that have regional dialects. Sperm whales and various dolphins and porpoises use sonar to echolocate prey. Other animals use sound to feed: some shrimps produce a “snap” sound to stun prey.

However, over the past 50 years, increased shipping has raised low-frequency noise on major routes by 32 times, the review said. Fishing vessels use sonar to find shoals of fish and bottom trawlers create rumbling noise. The construction and operation of oil rigs and offshore wind farms also cause noise pollution, as does the detonation of second world war bombs in the North Sea.

“Fish, clams, crabs and corals all hear sound and use it to find healthy places to make their home,” said Simpson. “So shipping or construction noise takes away that homing sense. It also means that whales that might have lived in a family and hunted over hundreds of miles have to live within 10 miles of each other to be able to communicate.

“We find that animals are directly stressed by noise as well, and so they make poor decisions that often lead to death,” he said, noting that noise from motorboats on the Great Barrier Reef in Australia leads to double the mortality from predators.

“Underwater noise is a serious concern and it is growing,” said Prof Daniel Pauly at the University of British Columbia in Canada, who was not part of the review team. “The level of noise marine mammals are exposed to is devastating … Underwater sound waves are far more violent than sound waves in air.”

There are solutions, the review found, with a retrofit of five large container ships by shipping giant Maersk in 2015 showing that new propeller designs reduce noise and also increase fuel efficiency. Quieter propellers are the top priority, said Duarte; half of shipping noise comes from just 15% of vessels.

Electric motors are another possible solution, as are small reductions in speed. For example, cutting the speeds of noisy vessels in the Mediterranean from 15.6 to 13.8 knots cut noise by 50% between 2007 and 2013. Seismic surveys can also be carried out using seabed vibrators, rather than sending noise waves through the whole water column.

“Cutting noise is possibly the lowest-hanging fruit to make a difference and we can change that today,” said Simpson. “I have real hope that we will hear a healthier ocean in our lifetimes.”