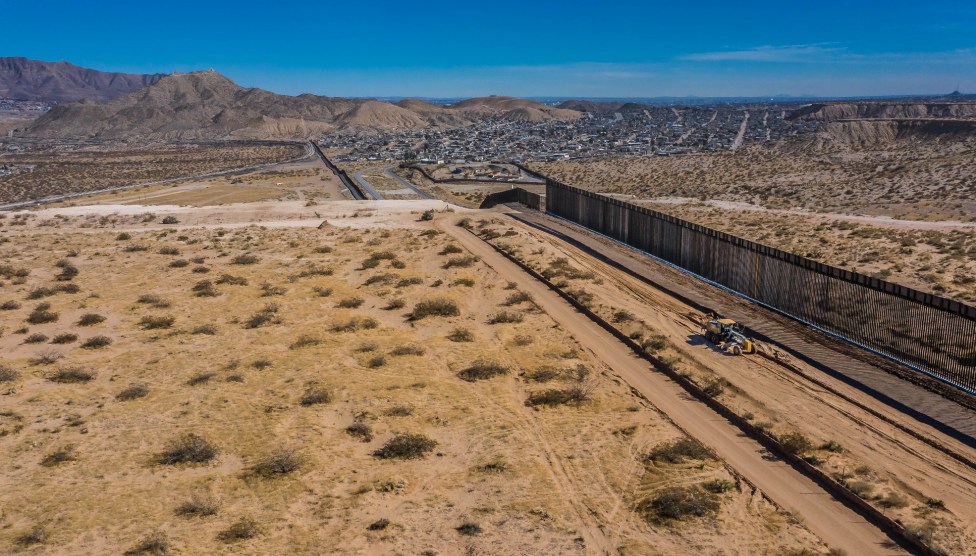 This story is the first of three installments published by High Country News and Arizona Public Media and is reproduced here as part of the Climate Desk collaboration.

In the last year and a half, crews have raced to complete the border wall promised by President Donald Trump. By the time his term ended, many of the construction projects across Arizona’s Borderlands were complete. As President Joe Biden takes charge, environmental groups are taking stock of the environmental destruction caused by the wall as they make the case for restoration.

Much of Arizona’s international border with Mexico is made up of public lands, places set aside by the federal government for special protection because of their unique ecological value—Organ Pipe Cactus National Monument, the San Pedro National Riparian Conservation Area, and Cabeza Prieta and San Bernardino national wildlife refuges, among others. So when the Trump administration released its first plans for new border wall construction in Arizona in May 2019, environmentalists were horrified to see that nearly all the proposed wall segments were on those public lands.

The administration “really started to push out into remote, rugged terrain on public lands all across the borderline in Arizona, where the ecological value of those places is so much higher that the damage done by this construction is much more egregious,” said Randy Serraglio, Southwest conservation advocate with the Center for Biological Diversity.

“Nothing larger than a cottontail rabbit could pass through there.”

“This is damage that will not ever be remediated or mitigated,” Serraglio said. “This is permanent.”For months now, construction crews have been dynamiting, drilling, pumping, excavating and clear-cutting public land. In places like Guadalupe Canyon in far eastern Arizona, simply building roads to bring in construction equipment involved blasting mountainsides and sending the rubble down to clog drainages. Previously wide-open landscapes where wildlife and water could move freely have been severed by the huge steel barrier. The Sonoran Desert’s iconic saguaros, protected by law, have been found lying in heaps next to construction sites.

Under the Trump administration, contractors have replaced barbed wire or waist-high barriers with 30-foot-high steel beams, 6 inches wide, with only a 4-inch gap in-between. “Nothing larger than a cottontail rabbit could pass through there,” said Myles Traphagan, Borderlands program coordinator with the Wildlands Network. “So the common wildlife you see along the border, such as javelina, deer, mountain lion, bobcat, bighorn sheep, those are going to be completely impeded by this border wall.”

Traphagan’s organization works closely with ranches in Mexico that prioritize wildlife protection and cross-border migration corridors. He said their game cameras used to capture images of hundreds of animals per month traveling the drainages near San Bernardino National Wildlife Refuge. “But the last few times I’ve been down there, those numbers have just plummeted,” he said.

Then there’s the impacts of water use: In many places, contractors have pumped water from deep belowground for construction purposes, wetting roads to keep the dust down or to make cement. Because Arizona doesn’t require data on water usage from wells in these areas, there are no hard numbers on how much has been used, but some impacts are already clear.

“The refuge is on a ventilator. Because those flows would stop if they didn’t have the pumps installed.”

Quitobaquito is a rare desert spring in Organ Pipe Cactus National Monument, located on the ancestral homelands of O’odham tribes. Despite promises from U.S. Customs and Border Protection that the builders would respect a five-mile buffer around the spring and its pond, hydrologists and ecologists who monitor the site said last year that the pond dropped to its lowest levels in years after pumping began for the border wall. Since February 2020, CBP has withdrawn 45 million gallons of water around Organ Pipe Cactus National Monument.

In the southeast corner of Arizona, the San Bernardino National Wildlife Refuge is managed by the U.S. Fish and Wildlife Service. Its artesian-fed wetlands and springs support several threatened and endangered species, including the Yaqui topminnow, Yaqui chub, beautiful shiner and Yaqui catfish.

Traphagan said the wall contractors installed higher-capacity pumps to keep the refuge wells from drying up completely. “Right now, the refuge is on a ventilator. Because those flows would stop if they didn’t have the pumps installed,” Traphagan said.Last summer, documents obtained by the Center for Biological Diversity via the Freedom of Information Act revealed that nearby groundwater pumping for the border wall—as much as 700,000 gallons per day—was depleting the refuge’s wetlands. That ultimately forced staff to relocate fish and allow some wetlands to dry up in an effort to protect the species.

A year ago, hundreds of protesters gathered along the San Pedro River, one of the Southwest’s last free-flowing rivers and a jewel of southern Arizona, to protest the plan to build a border wall across the riverbed. But despite active opposition by environmentalists, local residents and members of Congress, construction continued. By November, that wall was complete.

“That river is a lifeline for hundreds and hundreds of species; millions of migratory birds use it as a flyway every year,” Serraglio said. “And yet they have constructed a wall right across the riverbed that will almost certainly act as a dam and completely disrupt the normal ecological functioning of that river.”

Compounding the environmental impacts is the fact that 2020 was one of the driest and hottest years on record. For parts of the wall that cut across riverbeds and water crossings, Traphagan said, that means that some of the true impacts, such as flooding and erosion, have yet to be seen. The long-term impacts of severing wildlife corridors are also unknown, he said. “We have walled off 75% of the continent from the Rio Grande to (the) Pacific Ocean,” he said. “By doing so, we’re conducting an uncontrolled ecological experiment that is going to potentially alter the evolutionary history of North America for decades to come if these walls remain intact.”

Climate change also means that rare desert water sources are becoming even harder to find, so that animals need more room to roam, not less, said Emily Burns with the Sky Island Alliance, a conservation group. “In 2020, there was an incredible drought. It’s not over yet, and we’ve seen springs in the Borderlands completely dry up,” Burns said. “Animals now have this double insult of not being able to walk as far to find water because they’re cut off by the wall.”

In March, months before construction began in the wider region, her group installed a series of game cameras along part of the U.S.-Mexico border to gather data on cross-border animal migration. The initial results, which detected more than 100 different species, have been very encouraging, she said. That’s because the mountainous region where the cameras are located is an incredibly biodiverse area. Burns hopes her camera data can be used to convey a bit of what wildlife migration was like before the new wall was built.

“Each species is going to respond differently to the border wall. We need to understand how they’re being impacted so we can work on a multi-species conservation strategy to minimize the damage that’s already been done by the wall,” she said.

To speed up construction, the Trump administration waived dozens of environmental and cultural resource laws.

This is one of the fundamental problems with any recovery or restoration of the Borderlands now that wall construction has ended or been stopped, said Serraglio. In order to speed construction, the Trump administration waived dozens of federal environmental and cultural resource laws that normally apply to such projects—laws that were created to minimize or mitigate their impacts.

“We don’t really have the baseline science to be able to determine what all of the impacts are going to be, because all of the environmental laws that would have required that kind of analysis were waived,” he said.

Many environmental groups have begun to make their case to the Biden administration, suggesting ways to mitigate the impacts of the wall or even remove sections of it. But because those baseline studies never happened, many are worried we’ll never know exactly what was lost in the rush to build it.