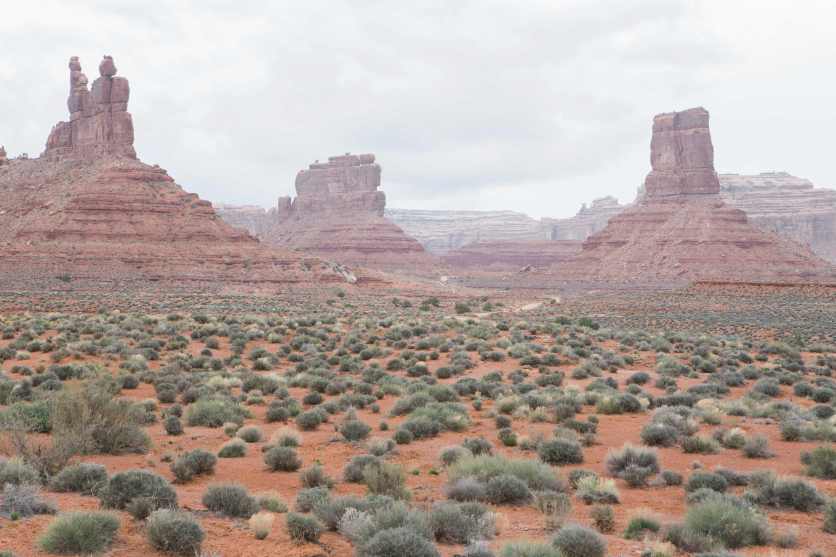 Valley of the Gods in the heart of Bears Ears National Monument. Mint Images via ZUMA Wire

This story was originally published by Yale Environment 360 and is reproduced here as part of the Climate Desk collaboration.

“The Trump administration was smart,” says Charles Wilkinson, an emeritus professor at the University of Colorado Law School and an expert in public land law. “They went underground and did not have broad policies, but just took all kinds of actions opening up public lands to exploitation. The most dramatic was oil and gas leasing. By and large it was parcel by parcel, and program by program. And they got away with a lot.”

The oil and gas shopping spree reached its peak in the last few months of the Trump administration. The Bureau of Land Management (BLM) approved the sale of 1,400 leases out of 3,000 applications, primarily in New Mexico and Wyoming — the most of any three-month period of Trump’s presidency. The rapid-fire leasing blitz was an effort to get ahead of incoming President Joe Biden’s plans to end new drilling on federal lands as part of a sweeping climate change strategy, conservationists say.

“Give it all away before you go,” said Jayson O’Neill, director of the Western Values Project, a nonprofit that monitors the relationship between public lands and special interests. “It’s been four years of administratively rushed approval processes and a legal morass. It’s going to be years until the tentacles of industry can be unwrapped from every action that [the] Interior [Department] took.”

The Trump administration made at least 125 rule changes to favor special interests on public lands.

The list is long. Protections for migratory birds, clean water, and endangered species have been cut back. Just last week the U.S. Fish and Wildlife Service said it would remove 3.4 million acres of protected habitat for the spotted owl, which conservation groups say is endangered and needs more, not fewer, protections.

The size of two national monuments was shrunk substantially, including Bears Ears in Utah, which is considered sacred ground by many Native American tribes. Oil leases on 550,000 acres were auctioned off in the Arctic National Wildlife Refuge, fetching just $14.4 million, far less than anticipated. The BLM okayed a right-of-way for a four-lane highway through the Red Cliffs National Conservation Area in Utah and the U.S. Fish and Wildlife Service permitted the “incidental take” of the threatened desert tortoise, whose habitat lies in the path of the new road. And the headquarters of the Bureau of Land Management was moved from Washington, D.C. to Grand Junction, Colorado, leading many senior officials to leave the agency and thus hamstringing its effectiveness.

And in recent months, the U.S. Forest Service has been accused of rushing the process for a controversial land deal in Arizona that will trade public land sacred to the Western Apaches to the mining company Rio Tinto — the same company that destroyed a 46,000-year-old sacred site in Australia last year.

Now, with Biden in office, what happens next? What can the new administration do to unscramble the litany of changes Trump and his appointees have left behind. Where do they start?

President Biden has an ambitious public lands agenda, radically different from his predecessor. He has pledged that on his first day in office he will issue an executive order to conserve 30 percent of America’s lands and waters by 2030, focusing on the most ecologically important areas. And his campaign website says his administration “will work with tribal governments and Congress to protect sacred sites and public lands and waters with high conservation and cultural values.”

In his boldest pledge, President Biden also has promised to ban new oil and gas permitting on public lands and waters. And the incoming president has appointed the first Native American to be Secretary of the Interior, Congresswoman Deb Haaland of New Mexico, a member of the Laguna Pueblo tribe who has voiced her opposition to oil and gas drilling on federal lands.

The plethora of oil and gas leases may be difficult to undo because they involve property rights.

In reversing the previous administration’s actions, experts say, one of the first places to start is with Trump’s executive orders. These are issued by the president with the stroke of a pen, and they have the force of law. They can be undone by an incoming administration the same way.

President Biden has pledged to re-establish the original boundaries of Grand Staircase Escalante and Bears Ears National monuments by executive order, under the authority of the Antiquities Act. These national monuments, both in Utah, were established by President Clinton and President Obama, respectively. President Trump reduced them by a total of 2 million acres — an action met with a lawsuit filed by the affected tribes that has not yet been resolved. But many experts believe the act gives the incoming administration the authority to change the boundaries again.

Some of the environmental policy changes, though, will be harder to reverse because the rules that implement key laws, such as the National Environmental Policy Act (NEPA) and the Clean Water Act, were changed.

“With the most damaging policy decisions and initiatives, the problem is when they have been done by rule-making and not executive orders and they have political support in the Senate, in particular, it can be hard to undo those things,” said Jim Lyons, the deputy assistant secretary for Land and Mineral Management at the Interior Department under Obama.

For example, rule changes to NEPA, one of the nation’s bedrock environmental laws, made it easier for “categorical exclusions” that allow the Forest Service to bypass requirements for environmental analysis of logging projects under 2,800 acres, roads as long as 2 miles, and special permits that allow private entities to use up to 20 acres. Environmental groups and attorneys general in some states are now suing the Forest Service to overturn the new rule.

And the Trump administration changed the rules of the landmark Migratory Bird Treaty Act, allowing — without penalty — the incidental killing of birds from an oil spill, electrocution by power lines, or collisions with wind turbines.

The plethora of oil and gas leases may be one of the most difficult problems to undo because they involve property rights. “Once they [companies] have those leases, they last for 10 years, and they are often renewed,” said Lyons.

It took some 40 years of bureaucratic decisions and court actions before leases in the Badger Two Medicine Wilderness of Montana, an area important to the nearby Blackfeet tribe, were canceled last year.

In the meantime, development of oil and gas leases could cause environmental damage. Lyons noted that the Trump Interior Department had targeted leasing in sensitive habitats, like the priority sage grouse conservation areas. He believes this may have been done for spite. To keep the bird from having to be listed as endangered, the Obama administration made it a priority to protect sage grouse habitat, and Trump had a well-known antipathy toward Obama’s legacy.

“The damage is economic as well as ecological because we are giving away these leases at rock bottom prices,” Lyons said.

Any effort to ban oil and gas development would run into a buzzsaw of opposition.

One of the hurdles to undoing the long list of changes to public land and environmental policies, experts say, is that Trump appointed so many conservative judges to federal courts, which is where many lawsuits on these issues end up. In four years he appointed 226 judges, while Obama in eight years appointed 320. On the all-important federal appeals courts, Trump appointed 54 judges, one shy of Obama’s two-term total of 55, and on several of those courts Trump changed the balance from Democratic to Republican appointees. He also appointed conservative jurist Neil Gorsuch to the U.S. Supreme Court. As a U.S. district court judge, Gorsuch ruled against deference to federal agencies and their expertise, which experts say could have serious repercussions for conservation.

The new alignment of the courts may be one reason why Biden will find it difficult to keep his promise of ending oil and gas drilling on public lands. Any effort to ban oil and gas development would run into a buzzsaw of opposition, legal and political, in Republican and Democratic states alike, where revenue from oil and gas leasing helps support state budgets for roads, schools, and public services.

And changing the decisions the Trump Administration made, or putting forward new policies, sets up the possibility of an array of new conflicts in a nation that seems to become more polarized and angry by the day. Many Westerners have made it clear they will resist changes in public land and environmental policies, sometimes by force, as in the case of the occupation of the Malheur National Wildlife Refuge by armed far-right extremists in 2016.

The sage grouse could be one of those issues. Trump’s extensive leasing in critical sage grouse habitat could worsen the bird’s precarious state, leading to renewed calls to list it as an endangered species in many Western states — a move that would surely arouse the ire of Trump’s most ardent supporters.

In addition, a Biden ban on fossil fuel exploration and development on public lands could mean conflicts over a loss of jobs and revenue. A recent analysis by the oil and gas industry in New Mexico said that the state would lose $1 billion a year in revenue if all public land drilling ceases.

Conservationists are urging Biden to be proactive on public lands issues, not just reactive. Although Trump rescinded the roadless rule for Alaska, to allow more logging and other development in the Tongass National Forest, tens of millions of acres of national forest are still protected by it. “Take the roadless rule to Congress, make it harder to amend, and expand it,” said Wilkinson. He believes Biden will also add to the country’s national monuments, an effective tool for protecting highly valued lands. “You can do great things with national monuments,” he said.

As the Biden administration takes over, critics say the Trump legacy on public lands and environmental issues is clear. “The most extractive ever and the furthest from where public opinion rests,” said Wilkinson. “It will go down as the worst administration ever on the public lands.”