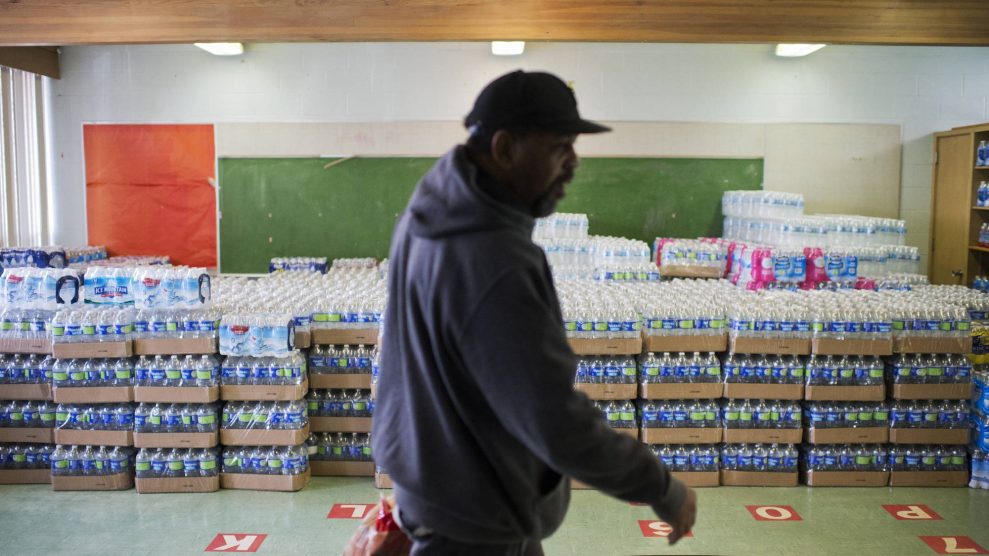 A volunteer walks by cases of bottled water at the St. Mark Baptist Church in Flint, Mich., that serves as a water distribution area.Tom Williams/Zuma

Sometime in 2021, a much-anticipated era of lead-free pipes will begin in Flint, Michigan. Contractors have replaced more than 90 percent of the city’s pure lead and galvanized-iron pipes connecting homes to the water mains, and they are hard at work inspecting and replacing the roughly 2,500 that remain. Flint will likely become only the third major American city—after Lansing, Michigan and Madison, Wisconsin—to have replaced all its lead pipes. They are also the first to replace all the galvanized iron connections, another source of lead, and to pay for all the work without charging customers. Blood testing and residential water testing suggest that the lead levels in Flint water are now at historic lows.

The improvements mark an end to Flint’s disastrous history with lead pipes, which resurfaced in April 2014 when the city switched the source of its public water from Lake Huron treated by the city of Detroit to the Flint River, while discontinuing the use of corrosion control chemicals. The switch triggered an alarming rise in lead levels in the city’s drinking water, a corresponding spike in children’s blood lead levels, and a national scandal that led the city to switch back to water from Detroit in October 2015 while more than tripling the corrosion control dose. Ultimately, after revelations of deaths from two outbreaks of Legionnaire’s disease caused by the initial switch, a federal emergency was declared by President Obama in January 2016.

Our early studies of lead levels in Flint residences helped expose the water crisis. Now, in complementary studies published in Water Research and Environmental Science: Water Research and Technology, we’ve found that lead levels in the water were not as bad as first feared: Water lead levels did increase sharply during the first few months of the water crisis, but for most of the time the city was receiving its water from the Flint River, the average levels of lead in drinking water were indistinguishable from those before the switch. In fact, our research shows that the Flint water crisis wasn’t even the city’s worst lead exposure event of that decade.

The conclusions are based on data collected from the routine monitoring of the city’s sewage sludge, or biosolids. Well before taking samples at sewage plants became a popular way to track the surge of the novel coronavirus, scientists actively analyzed sewage to monitor aspects of public health, including viral disease markers, illicit drug consumption patterns, and human gut microbiome shifts. In Flint, officials have been sampling biosolids monthly for over 25 years.

We found that more than three quarters of the above-normal lead exposure during the water crisis occurred during June, July, and August of 2014. Contrary to speculation at the time, lead exposures during the rest of the 14-month crisis were in the same range as occurred before the switch. There was likely an initial spike of lead rust sloughing off pipe walls due to the discontinuation of corrosion inhibitors for the more corrosive Flint River water, which slowed down a few months into the crisis. This surprising trend is also confirmed in the blood lead data for Flint children.

Only during one month of Flint’s water crisis, June 2014, did lead levels rise to a range comparable to those experienced during the country’s worst water lead crisis of the 21st century. Between 2000 and 2004 in Washington DC, the fraction of the infant population with lead levels above 10 µg/dL (that is, 10 micrograms per deciliter of blood), which was the Centers for Disease Control and Prevention’s “level of concern” at the time, spiked to more than 5 percent. In Flint, the fraction of children with blood lead levels exceeding 10 µg/dL did not increase at all, although the fraction with blood lead levels exceeding 5 µg/dL, a new threshold instituted by the CDC in 2012, did rise significantly.

Interestingly, our work suggests that just four years before Flint’s water made national headlines, the city suffered an even worse lead exposure event. We uncovered evidence of a previously undisclosed spike in water lead levels in mid-2011, when Flint was still receiving water from Detroit. That year, lead levels were estimated to have risen 50 percent higher than during the peak of the crisis following the switch to Flint River water. There is no obvious explanation for this increase, yet it mirrors a previously unexplained rise in children’s blood lead, which was attributed to “random variation.” This worrisome discovery reinforces the ever-present hazard of antiquated plumbing containing lead, even when corrosion control is in place and a water system is presumably operating normally, and, ultimately, to the importance of lead pipe replacements to eliminate the threat.

Our work suggests that just four years before Flint’s water made national headlines, the city suffered an even worse lead exposure event.

The sewage data also confirms other studies that have shown dramatic improvements in Flint water’s lead levels. Biosolids tracking suggests that the protective measures taken after Flint switched back to Detroit water—including tripling the dosage of corrosion control additives and free replacement of lead faucets and all lead and galvanized pipe connections to water mains—will ultimately reduce lead levels by between 72 percent and 84 percent of the pre-crisis levels.

Still, those measures will not translate to lead-free water, since our work demonstrates that brass faucets, lead solder, and galvanized iron that remain in Flint homes will continue to leach lead—as they do in homes all over the country. Even brand new “lead-free” plumbing cannot always guarantee water lead levels below the American Academy of Pediatrics’ new recommendation of 1 part per billion for water in schools. Those facts should not detract attention from the major improvements in Flint’s water, which has already been meeting all state and federal standards for contaminant levels over the past four years.

Regrettably, the legitimate fears of residents, compounded by misinformation, bad science, and conspiracy theories that have proliferated in the “scientific dark age” of post-water-crisis Flint, have continued to undermine public trust in the water and overshadow the successes of the government-led public health response.

As residents continue to wait for elusive justice for the environmental crimes in Flint and cautiously consider a historic $600 million settlement from the state of Michigan, we acknowledge that the lead exposures during the Flint water crisis were not as bad as first feared.