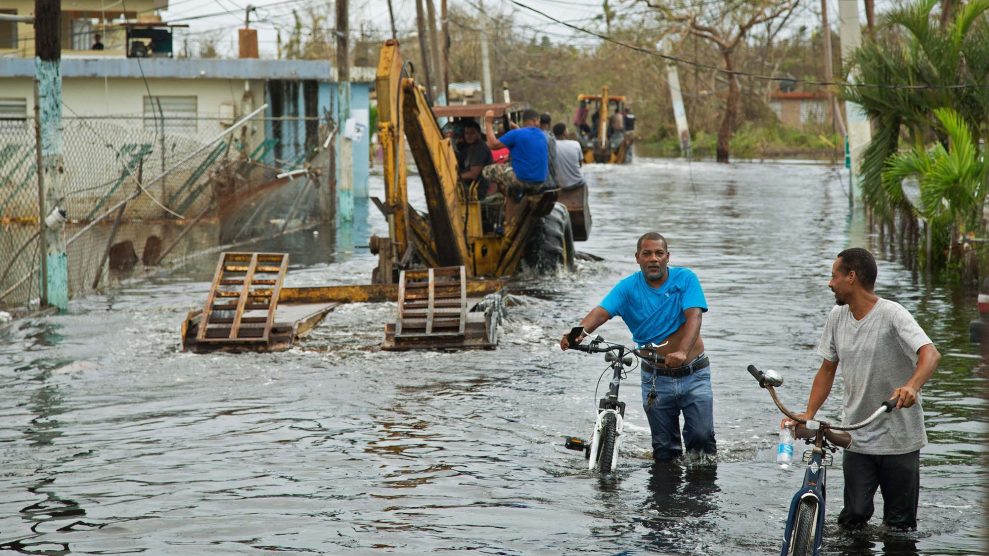 Puerto Rican residents use excavators to rescue neighbors from flooded areas of the Mini Mini community in the aftermath of Hurricane Maria.Yuisa Rios/Zuma

Almost three years to the day after Hurricane Maria slammed into Puerto Rico, killing thousands of people and leaving up to $95 billion of damage in its wake, the Trump administration announced a $13 billion aid package for the island’s recovery on Friday. Administration officials touted the funds as a big win for the island, with White House press secretary Kayleigh McEnany describing this as one of FEMA’s “largest grants ever.” Others saw a different motivation for the move.

“The Trump administration delayed, dragged its feet, and resisted allocating these badly needed funds,” Nydia Velasquéz (D-NY) noted in a statement responding to the White House announcement. “[F]orty-seven days before the election, the Administration finally sees fit to release these funds.”

The president hasn’t been generous in offering government support for Puerto Rico, which still hasn’t fully recovered from the hurricane. At least a dozen federal agencies are still at work trying to repair the damage, and much of the $50 billion in recovery funding, not including the most recent award, still hasn’t been dispersed. As of February, more than 100 schools remained closed, and many roads and buildings have been in a state of disrepair since the hurricane first hit. More recent hurricanes and earthquakes have also delayed recovery.

Before the storm, the island struggled to manage a financial crisis that extended back to 2015. With an annual budget of less than $10 billion, given the island’s $129 billion debt crisis, continued recovery efforts have been crippled without government support. This week, Democratic presidential candidate former Vice President Joe Biden has announced that he intended to cancel large amounts of the territory’s debt. For the last three years Trump has been unwilling to offer desperately needed help, even suggesting that the death toll from the storm was mere politics.

After Hurricane Maria struck the island as a Category 5 storm on September 20, 2017,  residents were left without electricity for weeks, water supplies were fouled, hospitals were overwhelmed, and eventually studies revealed that the death toll likely reached 5,000. In early October 2017, President Donald Trump visited the devastation to offer his support.

“I hate to tell you, Puerto Rico, but you’ve thrown our budget a little out of whack because we’ve spent a lot of money on Puerto Rico.”

The trip set the tone for the next three years. Within a number of hours, the president created three different controversies. While helping to distribute supplies at church in the town of Guaynabo, Trump cavalierly flung paper towels at a crowd that came for relief supplies. “There is no respect,” resident Zorahya Díaz told Mother Jones at the time. Then, the president compared the Maria to Hurricane Katrina, and said that of the two only the latter was a “real catastrophe.” But it was Trump’s statements on federal funding that would frame the future relationship between the president and Puerto Rico. “I hate to tell you, Puerto Rico,“ he said at a press conference during the visit, “but you’ve thrown our budget a little out of whack because we’ve spent a lot of money on Puerto Rico.”

In the years that followed, Trump repeatedly opposed sending recovery money to the island. In October 2018, he told White House officials that he wanted to halt any more recovery funds from going to Puerto Rico, tweeting, “The U.S. will NOT bail out long outstanding & unpaid obligations with hurricane relief money.”

The people of Puerto Rico are wonderful but the inept politicians are trying to use the massive and ridiculously high amounts of hurricane/disaster funding to pay off other obligations. The U.S. will NOT bail out long outstanding & unpaid obligations with hurricane relief money!

In April of 2019, Trump complained, again via Twitter, that Puerto Rico had received almost $100 billion in relief, implying that continued financial support should end. In truth, Puerto Rico received less than half of that amount. That summer, after announcing additional relief, Trump tweeted, “Puerto Rico should love President Trump,” without noting that he’d delayed the badly needed support for months.

Despite his unwillingness to see Hurricane Maria recovery efforts to the end, the president would later refer to his administration’s efforts in glowing terms. In 2018, Trump praised his administration for “one of the best jobs that’s ever been done.”

As my colleague Dan Spinelli reported at the time:

That argument defied the nonpartisan Government Accountability Office’s own postmortem of the actions taken last year by the Federal Emergency Management Agency. The report, which was released last week, found that FEMA employees were “overwhelmed” by the challenges of responding to hurricanes in the Caribbean, Texas, and Florida while managing a horrific wildfire season in California. At one point last October, the report noted, 54 percent of FEMA employees were not qualified for their assigned roles. FEMA Administrator William “Brock” Long acknowledged the stress employees were under during a congressional hearing last November, saying, “My staff is tapped out.”

The disconnect between Trump’s claims and reality wasn’t lost on Puerto Ricans. The mayor of San Juan, Carmen Yulín Cruz, tweeted of recovery efforts at the time, “Pres Trump thinks losing 3,000 lives is a success. Can you imagine what he thinks failure looks like?”

But on the eve of the third anniversary of the devastation, with the national election less than two months away, Trump has a different incentive to support additional recovery efforts. Puerto Rican voters in the battleground state of Florida might forget the years of neglect and insults if they see the $13 billion package as reason to vote for him.  Given Trump’s history of indifference, it is somehow fitting to mark the anniversary of the administration’s inconsistent and inadequate recovery efforts with financial aid arriving three years late.