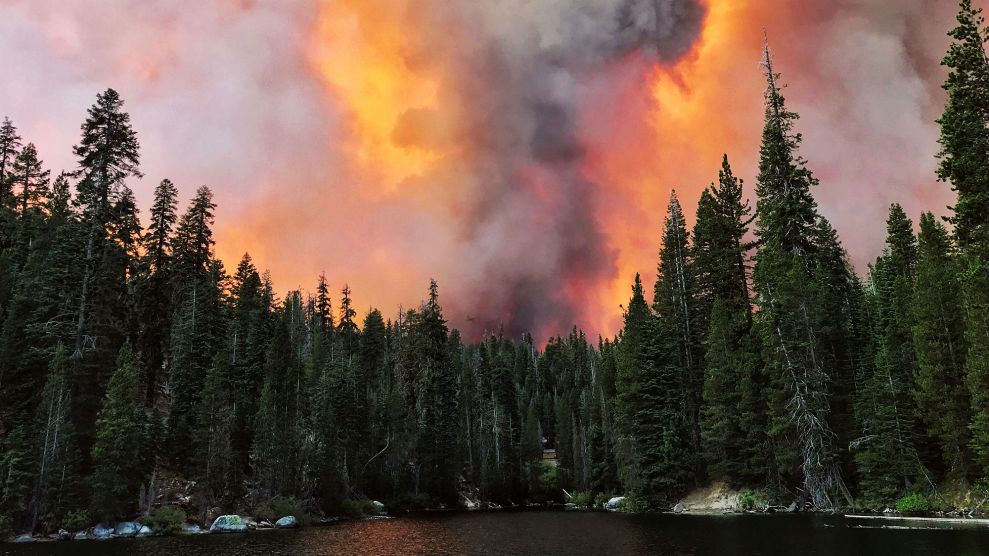 Nearly 150 million trees died in California between 2010 and 2018, officials estimated last year—one of the worst tree die-off events in state history. Its ramifications, experts predicted, would be sweeping, from a surge in carbon emissions to a loss in tourism dollars. At the time, researchers also issued another ominous warning: The dead tree material could fuel “mass fires” in the future.

Unfortunately, the past month has seen that last prediction already come true.

In a 2018 paper published in BioScience, a group led by researchers at UC-Berkeley predicted that the dead trees could serve as pockets of fuel for severe, unpredictable wildfires. “The scale of present tree mortality is so large that greater potential for ‘mass fire’ exists in the coming decades,” the authors wrote, “driven by the amount and continuity of dry, combustible, large woody material that could produce large, severe fires.”

“It was sort of like a warning: Hey, this could happen,” says Brandon Collins, a research scientist at Berkeley’s Center for Fire Research and Outreach and an author on the 2018 paper. But it wasn’t until this year that the Sierra Nevada’s Creek Fire “more or less demonstrated what we talked about in that paper.”

The currently 278,368-acre Creek Fire, between Yosemite National Park and Kings Canyon National Park, is just 27 percent contained as of Sunday evening and is expected to burn until mid-October.

Beyond its sprawling size—right now, it’s among the top 20 largest fires in state history—what makes the Creek Fire unique, Collins notes, is that its initial “explosive growth” of 160,000 acres in three days wasn’t so much driven by wind, which is typical with large California wildfires, but instead by the dead trees. As a result, the fire burned unusually hot in its center, not just at the edges. “For the first 36 hours, satellite imagery picking up heat showed the fire’s interior was just as hot as its edge,” Scott Stephens, the lead author on the 2018 paper, told USA Today. “It’s really unprecedented and so scary. All that energy is what caused the 35,000-foot cloud to form that created its own weather.”

The Creek Fire’s massive smoke plume was among the most stunning Collins says he had ever seen. “Given the high tree mortality that occurred in that area five to seven years ago,” he adds, “it’s highly likely that those dead trees were a strong contributor to the plume development and the resulting erratic fire behavior”—just as he and his colleagues had predicted.

Today I was flying from San Jose to Las Vegas on SWA & I looked out my window & I saw this cloud. I l found out that it is a cumulonimbus flammagenitus cloud aka pyrocumulonimbus cloud, a type of cloud that forms above a source of heat, such as a wildfire #CreekFire pic.twitter.com/HCqyWiHpNx

The massive tree death during those years was primarily due to the 2012-2015 drought and decades of forest mismanagement that resulted in severe overcrowding. But one other key factor was an extensive bark beetle infestation. With trees forced to compete for sunlight, water, and nutrients, all amid a drought, they were simply unable to fend off the beetles. Federal officials estimate that between 80 and 90 percent of the Creek Fire’s fuel source is “beetle kill timber.”

In some sense, Collins notes, a bark beetle infestation may seem like a good thing: If the forests are overcrowded, an explosion of bark beetles, one might think, could be a blessing. The issue is that the beetles, which munch on an inner, sugar-rich part of the tree trunk known as the phloem, tend to target bigger trees since “there’s a heck of a lot more phloem,” Collins says. “It’s way more efficient for them to attack and then feed on a large tree than it is for a smaller tree.” But big trees are also valuable to forest managers, as they tend to be more fire-resistant than small ones and are in short supply, at least in part because of historic timber harvesting. “We’ve cut out a lot of big trees constantly, for decades,” Collins explains. All this ultimately leaves forests less prepared to resist destructive wildfires—and the conditions may even help fuel them.

The good news is that the solutions to avoiding mass fires, like those Collins and his colleagues predicted, are pretty clear. He says a multi-pronged management approach should include thinning the forest—removing some smaller trees to allow other trees to grow bigger and stronger—and prescribed burns, which clear dead debris and can help prevent uncontrolled wildfires. (As my colleague Delilah Friedler noted last year, this is a practice that Indigenous people have been employing in California “for countless generations.”)

“We need more fire on the ground in many places,” says Chad Hoffman, an associate professor of wildland fire science at Colorado State University and another author on the 2018 study. “We have really solid scientific evidence both through modeling studies and empirical studies—real wildfires—that show that when we use active management, prescribed fire, we can create more resistant and resilient forests.”

Combating climate change, both Collins and Hoffman emphasize, is also crucial. A changing climate is “opening a window to a longer fire season,” Collins says, putting more pressure on firefighters, increasing the chances of a fire that crews can’t get to right away—causing it to spread quickly. “From a probability standpoint,” he says, “it just multiplies it out that way.”

With the extreme fires brought on by climate change, Hoffman says, “even our best management practices,” like controlled burns, may not be enough. He likens it to driving a race car: If you’re going at top speeds and crash, even the best safety features will fail. The same is true, he says, with tree protections: “They’re not effective under every condition for all scenarios. Climate change is definitely adding to this problem through that mechanism.”