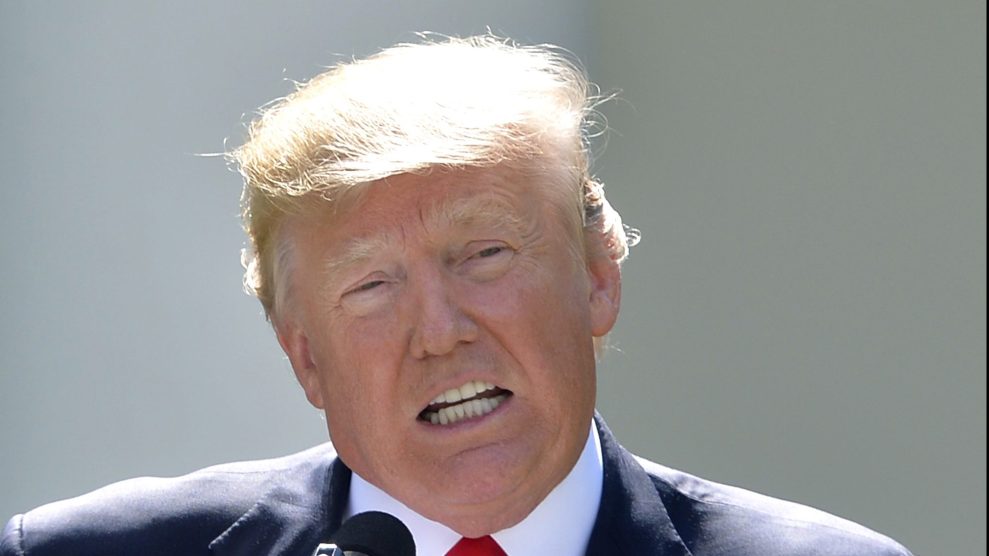 President Donald Trump in 2017, around the time he announced plans to pull the United States out of the Paris Agreement.Xinhua/Zuma

The origins of the world’s historic agreement to tackle climate change, in Paris in 2015, have some familiar themes. Back in 2007, there was a Republican president in the White House who had long been hostile to any action on climate change.

George W. Bush had refused to give US backing to a new global roadmap on the climate.

Fortnight-long UN talks had dragged on long past the deadline, through the night and into the next afternoon. Every other country wearily signed up, and still the US would not budge.

Delegate after delegate pleaded publicly and privately, there were even tears, to no avail. Then finally, to loud cheers, the representative from Papua New Guinea summed up the whole developing world’s frustration as he called to the US officials: “If you’re not willing to lead, please get out of the way.”

That stung. And what followed, in December 2007, was a dramatic moment on the international stage, as the White House—under Bush—publicly backed down. The UN’s resolution passed and the so-called Bali roadmap, precursor to the Paris agreement, came into effect.

It took another eight tortuous years for the Paris accord—the only global agreement binding nations to hold global heating within scientific limits—to be signed by another US president, Barack Obama. But that moment in Bali was crucial, because it clearly demonstrated for the first time the limits of US power.

Bush had sought to stymy progress for years, but ultimately even an intransigent US administration could not prevent the rest of the world moving forward on the climate crisis, if other countries showed a united front.

This year, the world will face a similar watershed.

Donald Trump began the process of withdrawal from the Paris agreement in June 2017, but for legal reasons it will take effect only on 4 November this year, the day after the US presidential election.

The withdrawal comes at a crucial point, as the Paris accord requires countries to come forward this year with new strengthened commitments to cut emissions, ratcheting up their inadequate initial targets from 2015. Only with fresh commitments from all nations can the aims of Paris be fulfilled, as current pledges would take the world to a potentially catastrophic 3C of warming.

“This really is absolutely vital,” says Mary Robinson, twice a UN climate envoy and ex-president of Ireland. “How can we reach the level of ambition that we need? We need leadership.”

The possibility of a Trump delegation blinking at the last minute, as Bush did, is remote. The 45th president pays far less respect to a rules-based international system than his Republican predecessor. But some in the developing world are sanguine about the prospect of a US withdrawal.

Mohamed Adow, director of the think tank Power Shift Africa, and a longtime observer at the UN talks, argues: “Trump has actually proven the resilience of the Paris agreement. When it was signed, very few people thought that it would have survived a US withdrawal, and yet here we are, the accord is still intact and no other country has followed Trump’s lead and pulled out. Trump has been the ultimate stress-test, and although he’s clearly caused damage, it’s actually shown that the global consensus is that we need to address the climate crisis.”

Saleemul Huq, director of the International Centre for Climate Change and Development in Bangladesh, and an adviser to developing countries, draws parallels with the US performance on Covid-19. “Trump’s withdrawal from the Paris agreement has been ignored by the rest of the world, as countries have gone on without the US. However, the damage that Trump is doing to his own citizens by ignoring climate science and virology science is killing his own citizens in alarming numbers.”

The world’s poorest and most vulnerable countries are also prepared to push ahead without the world’s biggest economy, and focus on encouraging new commitments from other developed nations. “The US withdrawal is regrettable,” says Carlos Fuller, lead negotiator of the Alliance of Small Island States (Aosis), many of which face inundation at 1.5C or more of warming. “One can only hope that it is not the final chapter for them, and they will return. As for the rest of the world, there is no excuse for further climate inaction and paralysis. The stakes are simply too high, and the window for meaningful action is closing rapidly.”

The divisions Trump’s stance has opened up within his own nation have also been starkly in evidence at the annual UN climate talks, where for the last three years, two different American groups have been showing up. One occupies a brightly lit central pavilion hosting prominent politicians, celebrities, business leaders and top investors, attracting big audiences for glitzy presentations on clean technology and green jobs. These are congressional Democrats, state leaders and city mayors, commanding huge budgets and able to slash emissions and foster green schemes, but without the levers of federal power. The real US delegation—the one with the power to vote and veto at the UN—sits down in the hall, in a small drab office with only a diminutive Stars and Stripes and photocopied sign on the firmly shut door, denoting its presence.

The official delegation has been as quiet as its understated appearance suggests. Unlike the Bush administration, the Trump White House has made little attempt to disrupt the UN process, and few interventions of any kind. Supporters of Paris have greeted this somnolence with relief, eager to avoid another showdown like Bali.

Opponents of Paris have viewed it as an opportunity, however, and that is where the real impact has been felt. Trump’s stance has emboldened other populist leaders and countries with previously veiled hostility to Paris. Last year’s UN climate talks in Madrid sputtered to a close without agreement on the key issues after Brazil held out, with Australia, Saudi Arabia, Russia and India accused of assisting in the obstruction at various points.

“When you have a player as big as the US not moving forward, that enables others to hide behind them.”

“There has been bad behavior in the negotiations,” says Jennifer Morgan, executive director of Greenpeace International. “When you have a player as big as the US not moving forward, that enables others to hide behind them.”

This year, the coronavirus crisis has forced a postponement of the Cop26 summit to November 2021. While the delay is worrying to many, who fear time and focus will be lost, it also neatly solves a diplomatic dilemma. The talks, called Cop26, were due to start in Glasgow on 9 November, just days after the withdrawal date and the US election.

For the UK hosts running the summit, the balancing act was to keep good relations with the Trump White House—which would lead the US Cop26 delegation even if Trump lost, because the presidential handover happens in January—and prevent a blow-up that would scupper any hopes of a deal. At the same time, they were also expected to keep warm backchannels with the Democrats, in case of a Biden victory.

By the rescheduled date, either a resurgent Trump will have long departed from the Paris fold and the UK will be dealing with the fallout, or Joe Biden will be president and will have begun the process of taking the US back in.

In some ways, the plan for a Trump victory is simpler. The world has already had years to prepare, and long experience of moving on without the US. China and the EU have a summit planned, originally for this year and now delayed, at which they are expected to forge a common approach to Cop26 and fulfilling the Paris agreement. Indeed, the climate crisis looks one of the lesser problems, notes Robinson: “If Trump gets elected, climate will be only one of many disasters with consequences that do not bear thinking about.”

Biden has promised the opposite of Trump: a return to the Paris agreement, a green recovery from the coronavirus crisis, emphasizing renewable energy, low-carbon technology, and a switch from jobs in fossil fuels to green jobs with long-term prospects. That would give fresh impetus to the Cop26 talks, and hearten activists. But no one should think it would be straightforward, warns Yvo de Boer, UN climate chief from 2006 to 2010, who oversaw Bali and the Copenhagen talks in 2009.

“You have to remember that there is nothing between the US Senate and God—certainly not the UN,” he says. “So you can’t have any kind of regime that tries to impose things on a sovereign state, no targets to be imposed, no review processes to be intrusive, and if you want to say things about financial obligations it has to be made in loose language.”

The US has proved a difficult partner in the past, even under Obama who made climate a key issue, but frustrated the Europeans with lists of demands and vetoes. That close control was demonstrated in Paris, when the conclusion of the accord was almost derailed in the final moments as the US found a single “should” had been mis-transposed as a “shall” in the text. The world was put on tenterhooks for an afternoon while it was fixed.

Biden and Trump may not even be the biggest headache the UK faces in trying to forge a new global plan at Cop26. As the White House’s U-turn showed in 2007, a united front among developing countries and enough rich world allies can overcome or bypass US recalcitrance. Far more concerning for the prospects of a breakthrough next year is the position of the world’s other superpower, and biggest emitter: China. Relations between China and the UK, hosts of Cop26, have sunk to a new low. That may turn out to be a far greater obstacle to progress than anything Donald Trump can manage.