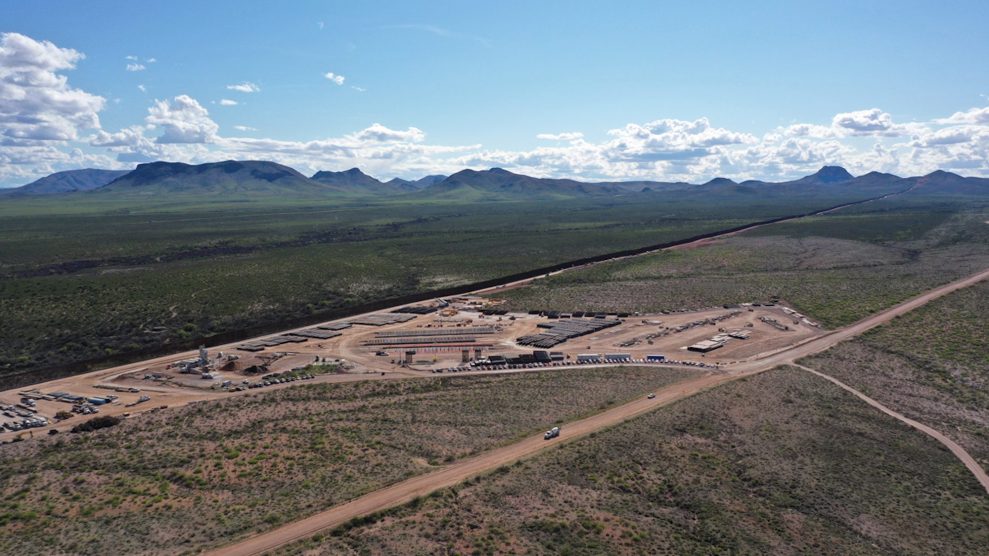 Border wall construction infrastructure is seen cutting through the landscape of southern Arizona. Bill Radke called the water withdrawals for the border wall “the current greatest threat to endangered species in the southwest region.”Russ McSpadden/Center for Biological Diversity

During the fall of 2019, the Department of Homeland Security began pumping large amounts of water from a southern Arizona aquifer to mix concrete for the Trump administration’s border wall. The aquifer is an essential water source for the San Bernardino National Wildlife Refuge, so when the pumping escalated, US Fish and Wildlife officials watched helplessly as the water levels at several ponds—the main habitat for the endangered fish at this Sonoran Desert refuge—dropped “precipitously.”

In what Bill Radke, who has managed the refuge for two decades, called “life support” actions, staff was forced to shut off water to three of the ponds to minimize broader damage. As a result, biologists had to salvage endangered fish from the emptying ponds. It was “like cutting off individual fingers in an attempt to save the hand,” Radke wrote in an email to staff.

Since its creation in 1982 the 2,300-acre refuge’s sole mission has been to protect the rare species of the Río Yaqui, including endangered fishes like the Yaqui chub and Yaqui topminnow, and other species, such as the tiny San Bernardino springsnail and the endangered Huachuca water umbel, a plant that resembles clumps of tubular grass. Through a series of artesian wells connected to an aquifer, the refuge has kept ponds filled in this fragile valley for nearly 40 years.

Under normal circumstances, a significant construction project like a border wall would be required to go through an extensive environmental review process as dictated by the National Environmental Policy Act. The Department of Homeland Security says it operates under the spirit of NEPA and solicits public comment. But with environmental laws — including NEPA, the Endangered Species Act and the Fish and Wildlife Coordination Act—waived for the border wall, the refuge lacks any legal protection, either for itself or the endangered species in its care. So wildlife officials have tried to work with the department, sending hydrological studies and providing recommendations about how to reduce water use near the refuge—information that the Department Homeland Security has repeatedly claimed it takes into consideration.

But as emails recently obtained by High Country News show, Homeland Security consistently ignored the expertise of Radke and his team. The emails, which were sent from August 2019 to January 2020, chronicle months of upheaval at the refuge and dysfunctional communication between Fish and Wildlife and Homeland Security. During crucial moments, Homeland Security kept wildlife agency staff in the dark as land managers and hydrologists worked to anticipate damages.

“What we are seeing in these FOIA documents confirms a pattern with CBP and DHS that goes back 15 years,” said Randy Serraglio, Southwest conservation advocate with the Center for Biological Diversity.

Matthew Dyman, a US Customs and Border Protection spokesman, stated that “DHS and CBP have and continue to coordinate weekly, and more frequently on an as needed basis, to answer questions concerning new border wall construction projects and to address environmental concerns from the US Fish and Wildlife Service.” Nevertheless, documents confirm that border wall construction caused groundwater levels to plummet and harmed endangered fish at the refuge.

In October 2019, Radke wrote to Fish and Wildlife staff that “the threat of groundwater depletion” at the San Bernardino Refuge had gone from “concerning” to a “dire emergency.” Subsequent emails detail the refuge’s difficulty in obtaining water usage estimates from DHS contractors for an accurate risk assessment. Fish and Wildlife officials sent the department a hydrology analysis to raise an alarm and requested a five-mile buffer around the refuge for well drilling.

“Instead contractors made plans to drill even closer to the refuge, drilling their second new well 480 feet east of (the refuge).”

According to the emails, though, the Department of Homeland Security did little in response. “I was disappointed today to see first hand that DHS and US Army Corps of Engineers did not abide by the (most recent) October 16, 2019, Fish and Wildlife Service request to minimize water withdrawal from the aquifer that supports all wetlands on San Bernardino NWR,” Radke wrote. “Instead contractors made plans to drill even closer to the refuge, drilling their second new well 480 feet east of (the refuge).”

CBP spokesman Dyman maintains that construction contractors honored the buffer request. But emails show otherwise: At least one well was drilled less than 500 feet from the refuge boundary; it was abandoned only after it didn’t produce water. And Fish and Wildlife soon learned that even more well locations were being considered near the refuge, according to emails. Homeland Security also continued to pump large volumes of water from a private landowner whose well is just 1.5 miles from the refuge.

Around the same time, pond levels in the refuge dropped. In a series of emails in late November, Radke grew increasingly frustrated. On Nov. 22, he wrote to agency employees, “Our refuge water monitoring is already showing harm to our aquifer during months when the refuge has always demonstrated an increase in groundwater levels. We have ponds dropping precipitously (as much as a foot already) that have never gone low during the winter months—not ever.” Fish and Wildlife had warned Homeland Security that this would happen, but no apparent action was ever taken. “I do not know what reaction to expect from DHS or (the Army Corps of Engineers) to our continuing requests for them to minimize or mitigate impacts to the refuge,” Radke wrote, “but so far our requests have been consistently met with indifference.”

“We have ponds dropping precipitously (as much as a foot already) that have never gone low during the winter months — not ever.”

On December 12, Radke called the water withdrawals for the border wall “the current greatest threat to endangered species in the southwest region.” By that point, refuge staff had begun to track the impact themselves; there was little else they could do. The monitoring became “an overwhelming priority that diminishes our ability to adequately meet other important objectives, obligations and due dates,” Radke wrote.

By January, the impact on the ponds was obvious. According to a Fish and Wildlife memo, swings in water pressure and depth were clearly documented. The report noted that these changes “began to occur as water was used off refuge for border wall construction.” Earlier emails speculated that the situation would only grow more dire at the refuge during the sweltering summer months, when evaporation both from the ponds and the water being pumped would use even more of the precious desert resource.

In an email, Dyman told High Country News that Customs and Border Protection and the US Army Corps of Engineers “are working closely with the construction contractor on estimated water usage requirements for barrier construction in Arizona as well as working with San Bernardino National Wildlife Refuge to mitigate the impacts of groundwater use for the project.” Beth Ullenberg, a spokeswoman for the Fish and Wildlife Service, confirmed that the refuge is working with Homeland Security. The agency “has identified that larger capacity pumps are now needed in order to maintain pond levels and appropriate pond outflows,” Ullenberg wrote. She said the contractor is purchasing and will install the new pumps at the refuge.

Those pumps came too late for at least three ponds and according to a document obtained by Defenders of Wildlife, as recently as May water pumping near the refuge was still having a direct and detrimental impact to the refuge. Environmental groups say a pattern of secrecy, lack of communication and failure to coordinate with land managers at the border continue to endanger other biodiverse regions, such as Quitobaquito Springs in Organ Pipe Cactus National Monument, where they intersect with border wall construction.

“(The Department of Homeland Security and Customs and Border Patrol) have consistently ignored the input of land managers and landowners and other stakeholders along the border with regard to these construction projects,” Serraglio said, “and it has resulted in serious damage time and time again.”