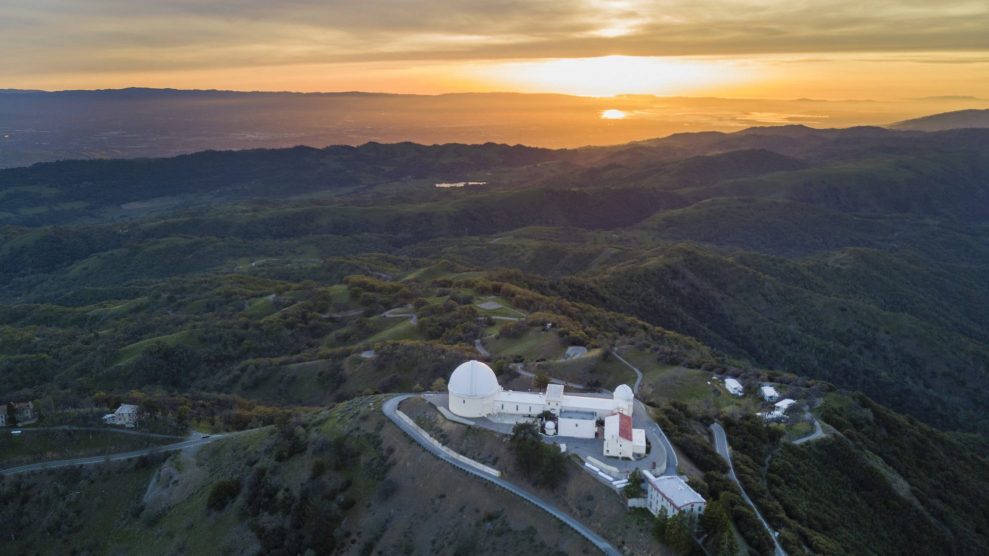 The Lick Observatory at the top of Mount Hamilton, in the Diablo Range just east of San Jose, California.Marty Bicek/Zuma

On the morning, of Sunday, August 16, freak summer thunderstorms rolled into the Bay Area, peppering the ultra-dry landscape with lightning, setting nearly 400 fires across Northern California. Ten miles to the north of the historic Lick Observatory, atop Mount Hamilton near San Jose, one such blaze was closing in, and fast: By Tuesday morning, the flames were 6 miles away. That night, the California Department of Forestry and Fire Protection, or Cal Fire, made the call to evacuate the facility’s 30-odd residents and staff members, save for the superintendent, Kostas Chloros, who’d stay on to coordinate the defense of one of the world’s most cherished observatories.

It was here that in 1969 astronomers made the first laser lunar ranging, calculating the precise distance to the moon. The observatory has helped scientists explore the structure of the universe, finding the masses of nearby galaxies, as well as black holes and quasars. Its Automated Planet Finder robotic telescope has been instrumental—literally and figuratively—in sniffing out the exoplanets that orbit distant stars.

The approaching firestorm threatened to abruptly halt that legacy. By Wednesday morning, multiple fire-strike teams were setting up on-site—over a dozen engines and around 60 personnel. Here, Cal Fire workers could not only protect the observatory, but stage their efforts to fight fires elsewhere in the area. “From their models and predictions, they knew it was going to hit Mount Hamilton around noontime or so,” Chloros said in a briefing that was livestreamed yesterday.

The fire reached close to the observatory’s first structures at 3:00 that afternoon, with the facility’s cameras, which are normally trained on the telescope domes and the surrounding mountainside, filming the moment of encroachment. “It starts to create these huge flames—150-foot, 200-foot-high flames,” Chloros said. “The fire did continue on. Basically, it tried to make a whole circle around the mountain.”

“The fire did continue on. Basically, it tried to make a whole circle around the mountain.”

In its assault on Mount Hamilton and Lick Observatory, the blaze consumed an unused residence on the property, damaged a few others, and ate through power poles. But Chloros—with his knowledge of the terrain, roads, fire trails, and water supplies—helped direct the movement of Cal Fire crews, who held back the flames, saving the iconic observatory. “This is a miracle, that these folks—with heroic efforts—they were able to keep the structures still standing,” Chloros said.

(WIRED reached out to Cal Fire, but they were not able to provide comment before press time due to California’s ongoing wildfires.)

Crews are still monitoring the area around the observatory, given that this group of wildfires, known as the SCU Lightning Complex, continues to blacken the region. As of August 26, the complex is only 25 percent contained, and it has so far chewed through 365,000 acres, or 570 square miles. But it appears the biggest threat to the historic Lick Observatory has passed.

Founded in 1888 by real estate mogul James Lick, then California’s richest rich person, Lick was the world’s first mountaintop observatory. “If you go to Paris, the observatory’s in the middle of Paris. If you go to Bologna, the observatory’s in the middle of Bologna,” says Claire Max, director of the University of California Observatories, which runs Lick. “And so this was the first observatory that really took advantage of being at a high site, where there’s both less pollution and less light pollution, and clearer air.”

You might be thinking, “Well, wait a minute. That was 130 years ago—now the observatory is plopped right above one of the most densely populated areas of the US!” How could Lick compete with the likes of the Hubble Space Telescope, which orbits far above both light pollution and smog? And it’s true that earthbound telescopes have some disadvantages. “For telescopes on the ground, light traveled through literally billions of light years of undisturbed space, and then in the last hundred kilometers, it gets blurred out by turbulence in the air,” says Max.

The solution is lasers. Lick’s Shane telescope wields an adaptive optics system, which fires a beam into the atmosphere. “Adaptive optics measures the turbulence hundreds or thousands of times a second, and then changes the shape of a special mirror, called the deformable mirror, to take away the blurring,” says Max.

The Shane telescope also has a larger mirror than Hubble: 3 meters compared to 2.4 meters. So if there happens to be a bright enough star nearby your viewing target, Max says, “you can get the same kind of spatial resolution that Hubble gets, because our telescope is more or less the same size, and we’re taking away the blurring of the atmosphere with adaptive optics.”

Not only can the Lick Observatory get astronomers great images—even with all the light pollution and disturbance of the atmosphere above—it’s also more accessible for researchers. “It’s a cutthroat competition to get observing time on Hubble,” Max says. “I don’t know what the fraction of success is, but it’s very low. And then if you do get success, you don’t get very much time to do your observations, because everybody else is chomping at the bit.”

The glaring weakness of a terrestrial observatory, though, is its exposure to earthly disasters like wildfires. Even though Lick’s telescopes appear to be undamaged, crews haven’t yet done an internal damage assessment of the buildings or the instruments therein. These are some of the most sensitive scientific instruments on earth, and they may be coated in ash if their domes weren’t fully sealed. “That’s got corrosive chemicals in it, and it’s also scratchy,” Max says. “So you have to be very careful how you clean your optics off, that you don’t make a bad situation worse—either by letting the chemicals corrode the top layer of the glass or by scratching the glass in the process of trying to get rid of it.”

Plus, these telescopes are powered by extremely precise motors that move the instruments around with micrometer accuracy—that’s a millionth of a meter. Obviously, if you’re staring into a far-off galaxy, you need such fidelity. “Hopefully, the motors didn’t get too gunked up,” says Max. “If they did, we’re going to have to take them all apart and clean them out. I think we probably are OK, because the domes are pretty well sealed, but that all has to be checked.”

If anything needs cleaning or repairing once crews open up those domes, that’ll of course cost money. But there’s also the incalculable cost for science. Many graduate students use Lick for their research, for instance. “They’re on a timeline,” Max says. “They have to graduate by a certain time, they have to get a job by a certain time. So they’re the ones that I want to be sure don’t get hurt by this.”

She credits that critical collaboration between superintendent Kostas Chloros and the Cal Fire crews with ensuring that astronomers would even have telescopes to come back to atop Mount Hamilton. Max says that one astronomer recently told her that Chloros should be knighted for having saved the observatory. “I’m just so grateful, Kostas,” Max adds. “Thank you.”