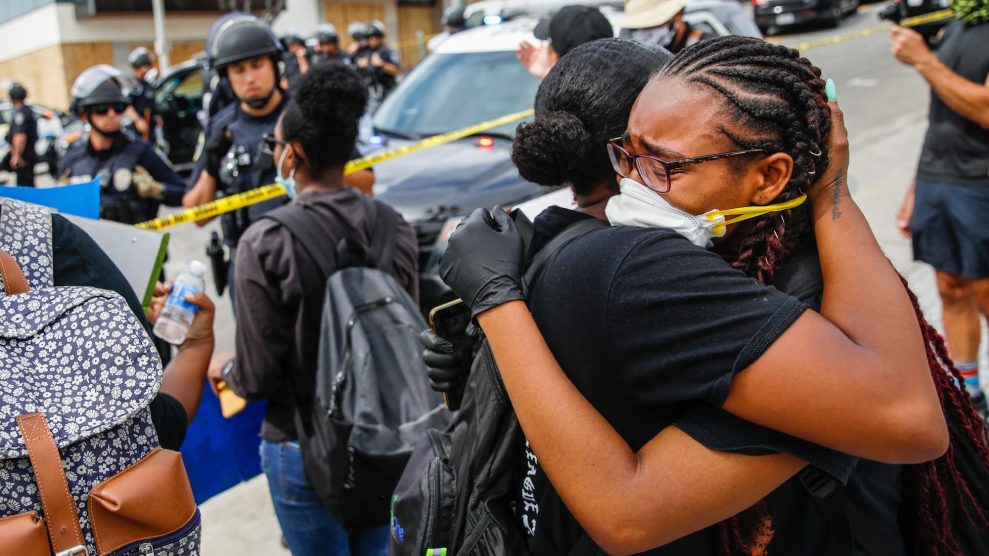 Janie Hill receives a hug from a friend at the conclusion of a protest over the death of George Floyd and support of Black Lives Matter in Manhattan Beach, CA.Jay L. Clendenin/Getty

When you’re faced with a threat, the adrenal glands perched atop your kidneys flood your body with the stress hormone cortisol (which amps up your metabolism and fights inflammation) and adrenaline (which speeds up your blood circulation and breathing). This is the biochemistry of your fight-or-flight response—it helps you either flee danger or stand your ground and brawl.

But it can also be overwhelming at times like this, when our brains are being bombarded by an absolute onslaught of crises: the COVID-19 pandemic, economic distress, and nationwide civil unrest as people across the country protest police brutality. You might at this point feel lost or numb, and that’s perfectly natural. Psychologists call it crisis fatigue: Your body is well adapted to handle temporary stresses, but it can get overwhelmed by the constant, unrelenting pressures of this horrible year.

There’s a reason why your body is prepared to ride out a high-stress, highly fearful state of affairs for a short time—when you’re super alert, you’re better able to detect and evade threats. But over the course of weeks, high cortisol levels wreak havoc on the body, resulting in problems like anxiety and insomnia. An ailment called Cushing syndrome, in which your body is exposed to high cortisol levels over an extended period of time, shows just how powerful the hormone is: It comes with weight gain, high blood pressure, and even bone loss. Stress can kill.

“Our bodies can’t sustain that level of nervous load,” says Adrienne Heinz, a clinical research psychologist at the National Center for PTSD, which is part of the US Department of Veterans Affairs. “Things start to fail, the wheels start to fall off. We experience a whole host of consequences—right now we’re seeing an uptick in national anxiety and depression. You start to see insomnia, relationship distress.”

Crisis fatigue manifests itself on two levels. On a societal level, it can tempt people to collectively throw up our hands and give up on civic engagement. “Why not, if we’re going to hell in a handcart? Let’s just enjoy tomorrow,” Matthew Flinders, founding director of the Sir Bernard Crick Centre for the Public Understanding of Politics at the University of Sheffield, told WIRED earlier this week.

With social media and cable news, we’re constantly bombarded with doom and gloom—and have been for at least a generation. In the 20 years since the terrorist attacks of 9/11, the United States and the UK have seen an almost constant stream of troubles that have emotionally exhausted their citizens: the 2008 economic collapse, wildfires ravaging the American West, ever-stronger hurricanes pounding the East Coast, and Brexit, just to name a few. “So I think there is a big issue out there around almost the layering, or sedimentation, of crises upon crises upon crises, that risks eroding our sense of social achievement, actually, and resilience,” Flinders said.

On a more individual level, that constant pumping of cortisol, an essential hormone for our survival, has become a burden. Much of the stress comes from uncertainty: Will I get COVID-19? If I do, will I be asymptomatic or end up in the emergency room? Will I inadvertently pass it to my grandparents? Will the presumed second wave of the pandemic that could arrive in the winter be worse than the first? None of us has lived through a pandemic like this, and none of us is equipped with the knowledge to weather it safely. And instead of a federal government standing ready to give us guidance, we have a president who will apparently allow the tear-gassing of peaceful protestors to make a photo op happen. “It’s a wholly different type of crisis, and it just fatigues us in ways that we’re not as used to,” says Heinz.

This is different than the uncertainty we might experience following a regional disaster like, say, a wildfire or a hurricane, which would devastate a much smaller community and be over relatively quickly. “Uncertainty is not new in disasters. It is a common feature of disasters,” says Joshua Morganstein, chair of the American Psychiatric Association’s Committee on the Psychiatric Dimensions of Disasters. But, he continues, “this disaster has some uniqueness in that the uncertainty is about some more fundamental things. It is lasting longer than it typically does in many disasters, and it is affecting far more people than other sort of climate-related disasters would affect.”

None of us know what we’ll be doing in a year, or a month, or even tomorrow, which has added a surrealness to ordinary life. “The surreal part, I think, comes when you’re thrown into a situation that you’ve never been in before. It’s extremely disorienting,” child psychiatrist Fredrick Matzner told WIRED when shelter-in-places orders went into effect nationwide in March. “If you’ve ever gone into an art museum, and you walk into a room with a big abstract painting on the wall, and look at it and you can’t tell what it is, you’ll feel anxious. You’ll feel uneasy.”

The killing of George Floyd by Minneapolis police officers on May 25 plunged the nation even deeper into crisis. Protests have spread across the country and the world, at times turning violent, as police have unleashed tear gas and rubber bullets upon crowds, from Minneapolis to Los Angeles to Washington, DC, and demonstrators have set fires and vandalized buildings.

These are exactly the kinds of events that flood your system with cortisol and adrenaline, and they’re likely to keep amping up people’s levels of burnout. But Heinz points out that protests can also serve as a sort of national catharsis. “There is a social unraveling happening, and hearts are weary with collective grief,” says Heinz. “On the one hand, we hold hope for real and meaningful change—and, on the other, we feel deep despair. Sitting with that paradox is exhausting. If we can somehow let both the loss and gain sweep through us, then we experience humanity authentically, and perhaps that is cathartic.”