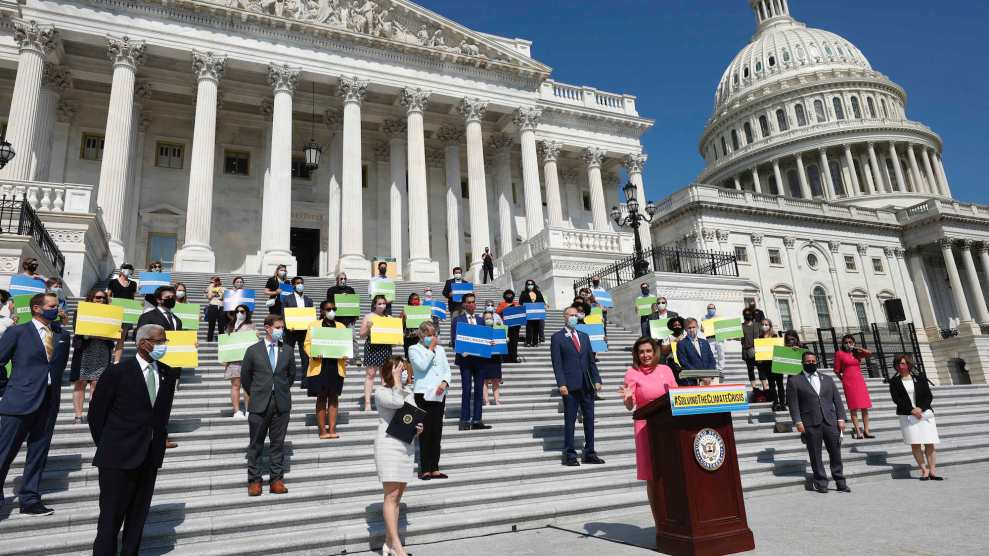 I’ve written before about how climate change is President Trump and the Republican Party’s greatest weakness in the 2020 race. But Democrats haven’t offered much in the way of an alternative—until now: On Tuesday, the 17-month-old House Select Committee on the Climate Crisis took a leap in the right direction with a rough blueprint for future legislation in Congress.

The Climate Crisis Action Plan builds on the Select Committee’s 17 hearings and more than a thousand meetings with stakeholders with 12 pillars of recommendations that touch all aspects of the American economy. Democrats pledge net zero greenhouse gas emissions in the United States by 2050. To get there, the 547-page report lays out proposals to double mass transit spending, ensure all new vehicles run on electricity by 2035, and transition to a coal-free electricity sector by 2040. Independent modelers estimate that these actions would save 62,000 more lives annually by 2050 and yield $8 trillion in health and climate benefits.

The recommendations in the report could save 62,000 more lives annually by 2050 and yield $8 trillion in health and climate benefits.

Yet even those impressive predictions are unlikely to sway the current administration. House Speaker Nancy Pelosi acknowledged that on the front steps of the Capitol on Tuesday.  “I wish it weren’t a fight,” she said.  “I wish it were a coming together.”

In addition to challenging the Republicans, the action plan also telegraphs how far the Democrats have come on the issue of climate change. The report downplays carbon pricing, the expansion of nuclear energy, and continuing reliance on natural gas—policies that used to be the holy grail of the Democratic establishment’s climate solutions. It doesn’t discount these old talking points entirely, but there is skepticism. For example, the report notes, “Carbon pricing is not a silver bullet and should complement a suite of policies to achieve deep pollution reductions and strengthen community resilience to climate impacts.”

That’s a departure: In 2009, Democrats tried to bring together a bipartisan coalition behind a revenue-neutral carbon tax, a strategy that famously backfired when the bill couldn’t even pass the Senate. The new strategy shelves that approach and instead “goes sector by sector and thinks of what’s actually necessary to reduce emissions on the pace that’s required,” says Leah Stokes, a climate expert and political science professor at the University of California Santa Barbara.

Democrats also appear to be channeling some of the left’s energy around the Green New Deal by emphasizing investment in infrastructure, like providing clean water and more mass transit. The report also acknowledges the need to directly help communities facing climate disasters, with federally funded programs that support “longer-term strategies, including options to relocate and resettle willing neighborhoods or communities.”

Another major theme of the report is the connection between environmental and racial justice. In the prologue, Democrats argue that “protests in response to George Floyd’s death are reminders of the consequences of past inaction, while responses to the COVID-19 pandemic demonstrate that Americans can mobilize en masse to save lives…What happens next—for racial equality, for public health, for the climate crisis—depends on us.”

Advocates of racial justice hailed the report. Peggy Shepard, executive director WE ACT for Environmental Justice, a NY-based environmental group, noted in a statement how structural racism intertwines with environmental priorities. The plan could be an “effective tool” for remedying this, creating better air quality, fairer energy rates, and a healthy food system, she said. “This is our time to address this legacy.”