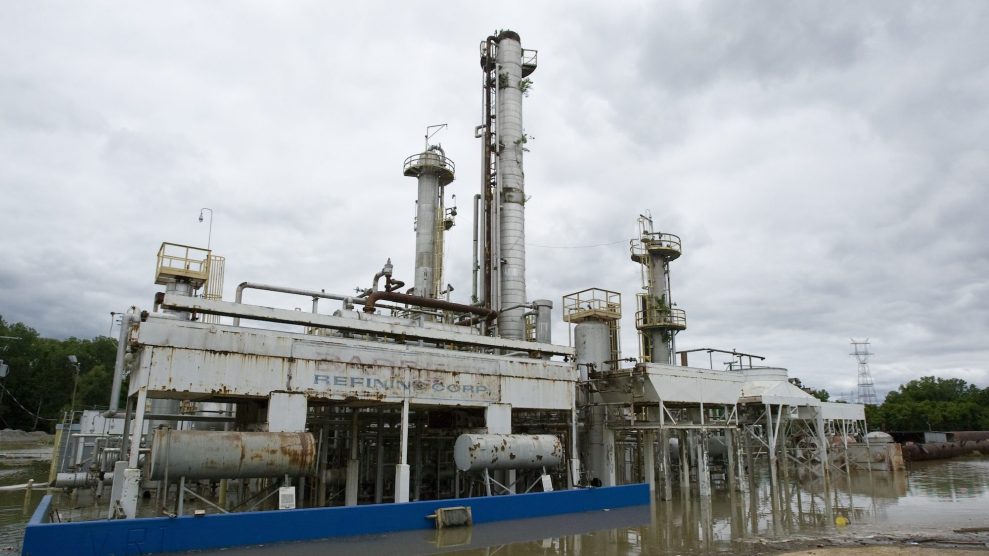 Mississippi is on the verge of becoming the 13th state in the past three years to slap new penalties on protests against fossil fuel infrastructure.

A bill that cleared the state Legislature earlier this week makes knowingly trespassing any property where oil, gas or petrochemical pipelines or tanks are located a misdemeanor punishable by up to six months in prison and a $1,000 fine.

Individuals who cause damage or losses that total more than $1,000―for example, by halting production at a refinery or stopping the flow of fuel through a pipeline ― could face felony charges punishable by up to seven years in prison and fines of up to $10,000.

The bill also threatens any “organization that aids, abets, solicits, compensates, hires, conspires with, commands or procures a person to commit the crime of impeding critical infrastructure” with fines of up to $100,000 and civil action from companies to recoup “damages for lost profits, whether or not any fine is imposed.”

The legislation passed 67-to-47 in the Magnolia State’s House of Representatives in March, just before quarantine orders to prevent the spread of the coronavirus pandemic delayed the legislative session. The state Senate voted 43-to-9 on Monday to approve it.

Gov. Tate Reeves (R) did not respond to a request for comment, but is expected to sign the legislation into law.

The measure, tracking with laws 12 other states have enacted since late 2017, designates fossil fuel sites as “critical infrastructure” and ups the penalties for protests that take place near them. It would be the latest of several to become law since the COVID-19 crisis began in March, according to a tally by the International Center for Not-for-Profit Law and data from Greenpeace.

Kentucky, South Dakota and West Virginia enacted the laws in March. A similar measure advanced in Alabama, but the Legislature failed to send it to the governor before its session ended. Louisiana, which already has a critical infrastructure law on the books, passed new draconian measures at the end of May that would have established three-year mandatory minimum sentences with hard labor for peacefully trespassing on fossil fuel property during a state of emergency, but the governor vetoed the bill last week.

The bills started popping up in state legislatures following the end of the protests to stop construction of the Dakota Access Pipeline under a sacred water source on the Standing Rock Indian Reservation. The months-long standoff with militarized security forces left hundreds of indigenous activists and environmentalists injured.

After the Trump administration fast-tracked the project for completion, the right-wing American Legislative Exchange Council (ALEC) began shopping around a model bill to ramp up penalties for participating in similar demonstrations in an effort to chill future protests.

“Legislators in many states continue to pamper big polluters over constituents, under the double-cover of COVID-19 and a nationwide uprising against a deadly, racist policing system,” Connor Gibson, a senior researcher at Greenpeace who tracks anti-protest bills, told HuffPost. “Rather than  protecting the life and liberty of Black people, or the needs of people who have lost work, politicians are helping fossil fuel interests subvert the fundamental right to protest.”

The Industry Asks And Receives

While ALEC helped promote the bills, the oil and gas industry deployed its vast influence network to ensure their passage. Such was the case in Mississippi.

Last year, the American Fuel and Petrochemical Manufacturers, a refinery trade group, retained well-known Mississippi lobbyist Joe Sims to champion the legislation, according to an email published by the watchdog group Documented. Sims said he was “working on legislation to provide a definition of ‘critical infrastructure’ and to provide for criminal penalties for those who willfully and illegally trespass, disrupt, destroy, etc. regarding such facilities.”

On Feb. 12 of this year, Sims took four Republican state lawmakers―Reps. Becky Currie, Jansen Owen, Hank Zuber and Rob Roberson―to a meal at an upscale steakhouse, according to lobbying disclosures published by Greenpeace’s Gibson. Three of those lawmakers―Owen, Roberson and Zuber―serve on the House committee, where the current version of the bill was introduced five days after the meal. The trio voted to advance the bill out of the committee less than a month later. And joined by Currie, they supported its final passage.