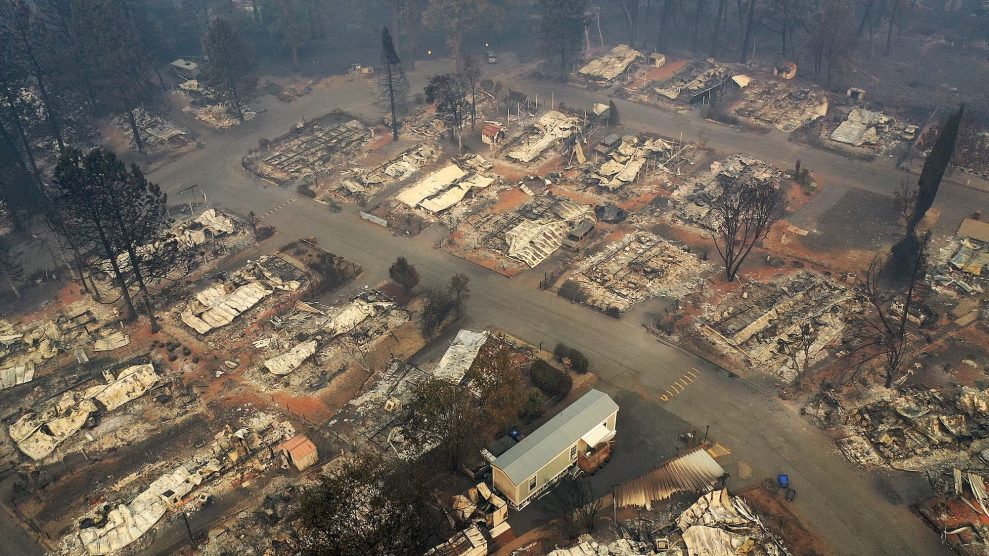 An aerial view of a neighborhood destroyed by the Camp Fire on November 15, 2018 in Paradise, California.Justin Sullivan/Getty

Political appointees at the Interior Department have sought to play up climate pollution from California wildfires while downplaying emissions from fossil fuels as a way of promoting more logging in the nation’s forests, internal emails obtained by the Guardian reveal.

The messaging plan was crafted in support of Donald Trump’s pro-industry arguments for harvesting more timber in California, which he says would thin forests and prevent fires—a point experts refute.

The emails show officials seeking to estimate the carbon emissions from devastating 2018 fires in California so they could compare them to the carbon footprint of the state’s electricity sector and then publish statements encouraging cutting down trees.

The records offer a look behind the scenes at how Trump and his appointees have tried to craft a narrative that forest protection efforts are responsible for wildfires, including in California, even as science shows fires are becoming more intense largely because of climate change.

James Reilly, a former petroleum geologist and astronaut also said the numbers would make a “decent sound bite,” and acknowledged that wildfire emissions estimates could vary based on what kind of trees were burning but picked the ones that he said would make “a good story.”

Scientists who reviewed the exchanges said that at best Reilly used unfortunate language and the department cherry-picked data to help achieve their pro-industry policy goals; at worst he and others exploited a disaster and manipulated the data.

The emails add to concerns that the Trump administration is doing industry’s bidding rather than pursuing the public interest. Across agencies, top positions are filled by former lobbyists, and dozens of investigative reports have revealed agencies working closely with major industries to ease pollution, public health and safety regulations.

A USGS spokesperson said Reilly’s emails were “intended to instruct the subject matter expert to do the calculations as quickly as possible based on the best available data at the time and provide results in clear understandable language that the Secretary could use to effectively communicate to a variety of audiences.” The agency added that it “stands by the integrity of its science.”

When forests burn, they do emit greenhouse gases. But one expert said the numbers the interior department put forth are significant overestimates. They say logging wouldn’t necessarily help prevent or lessen wildfires. On the contrary, logging could negate the ability of forests to absorb carbon dioxide humans are emitting at record rates.

“It is climate that is responsible for the size and severity of these fires.”