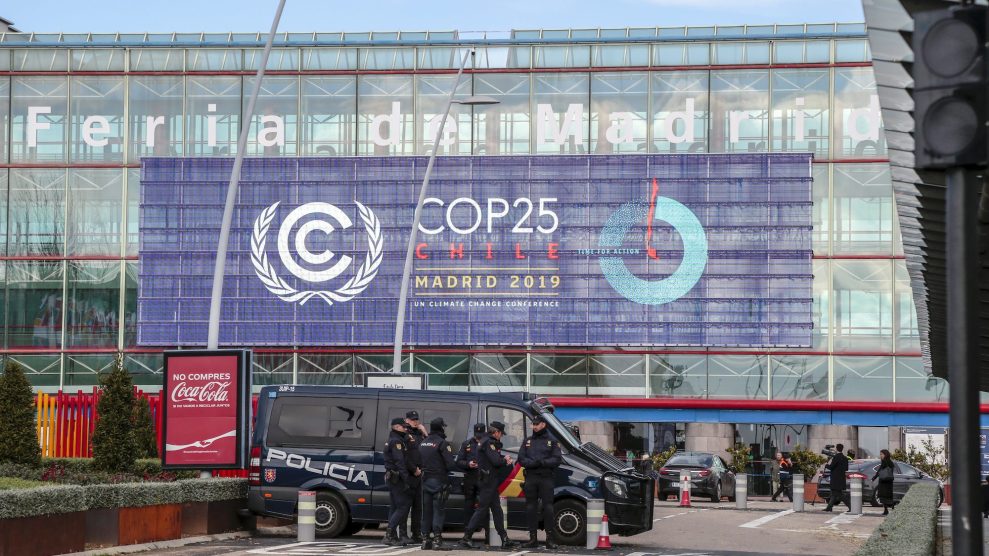 Environment of IFEMA venue during the opening day of the UNFCCC COP25 climate conference on December 2, 2019 in Madrid, Spain. Miquel Benitez/Getty

António Guterres, the United Nations secretary general, contrasted the “leadership” and “mobilization” shown by the world’s youth on the climate emergency with the lack of action by governments, which were failing to keep up with the urgency of the problem despite increasing signs that the climate was reaching breakdown.

Before the start of a critical conference on the climate crisis on Monday, he said the world had the technical and economic means to halt climate chaos, but what was missing was political will.

“The technologies that are necessary to make this possible are already available. Signals of hope are multiplying. Public opinion is waking up everywhere. Young people are showing remarkable leadership and mobilization. [But we need] political will to put a price on carbon, political will to stop subsidies on fossil fuels [and start] taxing pollution instead of people.”

Guterres called for further investment from rich countries and support for poor nations to make the changes needed to reduce greenhouse gas emissions and cope with the impacts of global heating. Amid rising temperatures, wildfires, heatwaves, droughts and floods, the danger signals were clear and must be acted on without further delay, he said.

“In the crucial 12 months ahead, it is essential that we secure more ambitious national commitments—particularly from the main emitters—to immediately start reducing greenhouse gas emissions at a pace consistent to reaching carbon neutrality by 2050.”

He was joined in his call by the leaders and representatives of some of the world’s poorest countries, which are suffering most from climate change.

The countries most at risk of deluge from climate chaos have issued an impassioned plea to the industrialized world ahead of crucial negotiations on the Paris Agreement that start on Monday in Madrid.

“We see [these talks] as the last opportunity to take decisive action,” Janine Felson, deputy chair of the Alliance of Small Island States (AOSIS) told the Guardian.

“Anything short of vastly greater commitment to emission reduction, a new climate finance goal and tangible support for disaster risk reduction will signal a willingness to accept catastrophe.”

“Anything short of vastly greater commitment to emission reduction, a new climate finance goal and tangible support for disaster risk reduction will signal a willingness to accept catastrophe.”

Pacific atolls and other low-lying islands are likely to be inundated if temperatures rise to more than 1.5C above preindustrial levels, while current Paris commitments put the world on track for a “disastrous” 3C.

“We are mired in a planetary emergency of existential proportion,” said the leaders of the 44 states of AOSIS, in a joint statement. “The impacts are real and current for people living on small islands. This does not have to be our destiny or legacy.”

“None of us are immune,” he said. “All month we have watched in horror as our Pacific cousins Australia have literally watched their country burn, fueled by a climate crisis of our own making.”

To fulfill the Paris goals, far tougher targets on emissions are needed, while this year’s negotiations—known as COP25, running from 2 December to 13 December—will focus on technical issues such as a mechanism for trading carbon within the Paris Agreement.

Resolving these technicalities will allow the UN to wrap up the Paris “rulebook,” setting out how to measure and achieve emissions cuts, but experts are concerned that it leaves too little time for the substantive question of targets, which under the rules must be resolved by the end of 2020.

Lord Stern of Brentford, one of the world’s leading climate economists, said: “It’s very important that this COP is not just tidying up, but starting [the process] of the next one. It’s positive that finance ministers and central bank governors will come this year, and countries like the EU and China need to show leadership.”

Under the 2015 Paris Agreement, countries are supposed to set out more ambitious climate action in 2020, when current targets expire. Governments were given the five-year grace period to ratchet up their national goals.

Some countries—including the UK—have put in place long-term goals of reaching net-zero carbon emissions by 2050. However, that leaves hanging the question of 2030 targets, which are needed to keep countries on track.

Talks on the crucial matter of 2030 commitments will largely be relegated to informal meetings on the sidelines of COP25, though these are what will determine the success of the Paris agreement—and the future of the climate.

There are also continuing tensions at the talks over funding to help developing economies curb emissions and cope with the consequences of climate disaster, and whether poor countries should be compensated by the rich for the loss and damage caused by global heating.

Patricia Espinosa, executive secretary of UN Framework Convention on Climate Change, said: “The world’s small window of opportunity is closing rapidly. We must urgently deploy all the tools of multilateral cooperation to make COP25 the launchpad for more climate ambition to put the world on a transformational path towards low carbon and resilience.”

The talks, taking place in Madrid after the original host nation, Chile, pulled out owing to its political crisis, will also be overshadowed by US president Donald Trump’s decision to withdraw from the Paris agreement.

The US last month formally submitted the one year’s notice legally required for withdrawal under the accord. The withdrawal will formally take effect the day after the next US presidential election, and just before the next UN talks in November 2020, to be hosted by the UK in Glasgow.

A US State Department spokesperson told the Guardian: “The US delegation at COP25 will actively engage in negotiations to protect US interests and level the playing field for US businesses.”