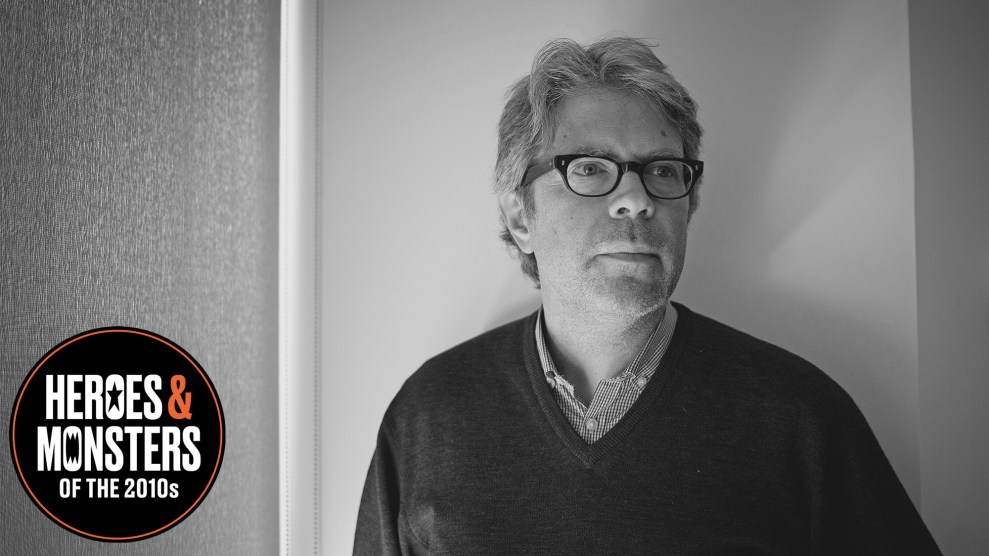 What has Jonathan Franzen done to deserve the title of “monster”? It is easier to start with what he’s done well. I’ll admit it: I enjoyed The Corrections.

And then there’s everything else. I wondered in writing this if it is still fair to pick on him, given his status as the Internet’s most-mocked novelist. That the critics loved him made everyone else seem to hate him all the more. Writer Jennifer Weiner named the frustration with Franzen’s ubiquity: “Franzenfreude,” defined as “taking pain in the multiple and copious reviews being showered on Jonathan Franzen.” Even the people who like him can’t help but fuck with him. At the start of the decade, a fan staged an elaborate heist, grabbing Franzen’s trademark glasses right off his face at a fancy book launch and leaving a 100,000-pound ransom note.

You can trace the Franzophobia back at least to the previous decade. Embarrassed that The Corrections was selected by Oprah Winfrey’s book club in 2001, Franzen ticked off Oprah fans and women writers alike by calling the list “schmaltzy” and “one-dimensional” and not in the “high-art literary tradition” of his own work. This was the Franzen way: not just antidemocratic, but blithe about the hierarchies that have benefited him.

His elitism could be very funny. Like when he traumatized us with a bunch of terribly written sex scenes and led us to wonder where such phrases as “firm little clitoris of discernment” fit into the high-art literary tradition. Or when he offered up writing tips. Normally when authors give tips they provide some mix of the practical and aspirational. Not Franzen. His 2018 suggestions to LitHub ranged from the nonsensical (“You have to love before you can be relentless.”) to the impractical (“It’s doubtful that anyone with an Internet connection at his workplace is writing good fiction.”) to the plain wrong (“When information becomes free and universally accessible, voluminous research for a novel is devalued along with it.”).

But then, at some point in the past few years, Franzen got himself anointed an authority on climate change, for reasons seemingly having to do with his birding hobby, and his snobbery took on a more sinister air. In the last decade he has published some truly terrible climate essays in The New Yorker. In one piece, published in 2015, he suggested that we prioritize preserving wilderness and wildlife over flighting climate change, because nothing can be done to help the planet. Franzen reprised the doomsday argument in 2019: “The climate apocalypse is coming. To prepare for it, we need to admit that we can’t prevent it.” We’re indeed in worse shape than most people imagine to adapt and prepare for climate change, but Franzen dismisses attempts to avert the worst of warming as too little, too late, and in doing so misunderstands that the impacts of climate change over the next century depend precisely on what we do now. Who bears the heaviest costs of climate disaster, and how, and when? These questions are still up for grabs. Franzen’s answer is more or less, “Who cares?”

Here was the old elitism masquerading as clear-eyed fatalism. Franzen believes there is something in our dumb brute nature—not his, mind you, but just about everyone else’s—preventing us from fixing the planet, that the only battles worth fighting now are “smaller, more local battles.” This was rich stuff, in all senses of the word, a game plan for climate action bearing all the marks of Franzen’s class, one that seeks to preserve his leisurely hobbies while writing off the suffering of others. As a wealthy white man, he is shielded from the worst immediate effects of climate change but not from, say, the impact of any mass mobilization on the order of the Green New Deal. Franzen’s climate parochialism is a way of coping with the moral imperative to do something that doesn’t put his privilege in any sort of jeopardy.

The glasses heist ended happily for the author, by the way. Police helicopters were dispatched, and the culprit was apprehended. (Franzen did not press charges.) Later, for British GQ, the bandit recounted the theft and escape, how he waded into a lake only to lose his stolen copy of Franzen’s new novel in the water. A nice little parable for our decade—the state whirring into action so that a rich asshole might get his glasses back, all while Freedom floats just out of reach.