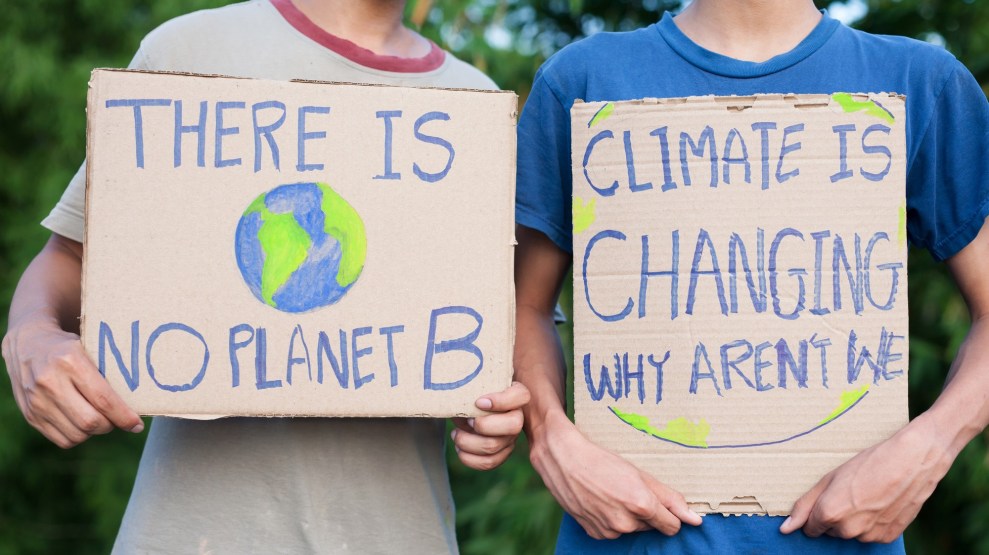 This piece originally appeared in the Guardian and appears here as part of our Climate Desk Partnership.

Countries must make an unprecedented effort to cut their levels of greenhouse gases in the next decade to avoid climate chaos, the UN has warned, as it emerged that emissions hit a new high last year.

Carbon dioxide emissions in 2018, also accounting for deforestation, rose to more than 55 gigatons, and have risen on average by 1.5 percent a year for the past decade, according to the UN Environment Programme (UNEP) annual emissions gap report.

Global emissions must fall by 7.6 percent every year from now until 2030 to stay within the 1.5C ceiling on temperature rises that scientists say is necessary to avoid disastrous consequences. The only time in recent history when emissions have fallen in any country at a similar rate came during the collapse of the Soviet Union. During the financial crisis and recession, emissions in the US and Japan fell briefly by about 6 percent but soon rebounded.

However, technologies such as renewable energy and electric vehicles are now available, and increasingly cheap, which could enable deep cuts in carbon without jeopardizing economic growth.

John Christensen of the Technical University of Denmark, a co-author of the report, told the Guardian the cuts in emissions now required were “unprecedented.”

Postponing action could no longer be an option, said Inger Andersen, executive director of UNEP. “Our collective failure to act early and hard on climate change means we must now deliver deep cuts to emissions [of] over 7 percent each year, if we break it down evenly over the next decade. This shows that countries simply cannot wait.”

Without such urgent action the world’s fate would be sealed within the next few years as carbon would rise to such a level as to make dangerous levels of warming inevitable, she said. “We need quick wins to reduce emissions as much as possible in 2020, then stronger [commitments under the Paris agreement] to kickstart the major transformations of economies and societies. We need to catch up on the years in which we procrastinated.”

The escalating heatwaves, droughts and extreme storms being seen across the world demonstrated the effects of failing to cut emissions fast enough, said Kelly Levin of the World Resources Institute, who joined the UN call for action. “While there have been examples of rapid change in specific technologies or sectors, there is no precedent in our documented history for the rate of change at the scale required for limiting warming to 1.5C [above pre-industrial levels]. We have never before witnessed such widespread rapid transitions, and they will need to be made across energy, land, industrial, urban and other systems. Achieving 1.5C will require unprecedented transformative efforts by all.”

Rana Adib, the executive secretary of the renewable energy think tank REN21, said: “Fossil-fuel-centred economies make it difficult for national governments to put climate concerns front and centre, with the result that globally we are not on track to meet the Paris agreement.” “This truth is hard to face. The emissions gap report shows the harsh reality: countries collectively fail to stop growth in greenhouse gas emissions. We have the necessary means to pursue the energy transition. What we need is the political and institutional will to make the transition a reality.”

Next year, governments are expected to make new commitments to cut greenhouse gases substantially by 2030, as part of the 2015 Paris agreement. Officials and ministers will meet in Madrid next week to clear the way for a crunch meeting a year from now in Glasgow, where the gap between countries’ current emissions pledges and scientific estimates of what cuts are needed will be addressed.

Current pledges under the Paris agreement are deemed inadequate; if countries stick to them next year, they would have to reduce emissions to zero from 2030 to avoid raising temperatures by more than 1.5C. For that reason, Andersen urged nations not to wait to enshrine new commitments, but to take immediate action.

UNEP has been reporting on the “emissions gap” between countries’ pledges and the cuts needed since the Paris agreement was signed in 2015, but rising emissions in the meantime have made the situation even more urgent. Last year’s landmark scientific assessment by the Intergovernmental Panel on Climate Change revealed the ravages that would result from a 1.5C rise above pre-industrial levels, including the near-total extinction of coral reefs, and extreme weather around the world.

The current pledges made by countries under the Paris agreement would cause temperature rises of about 3.2C this century, according to scientific estimates.