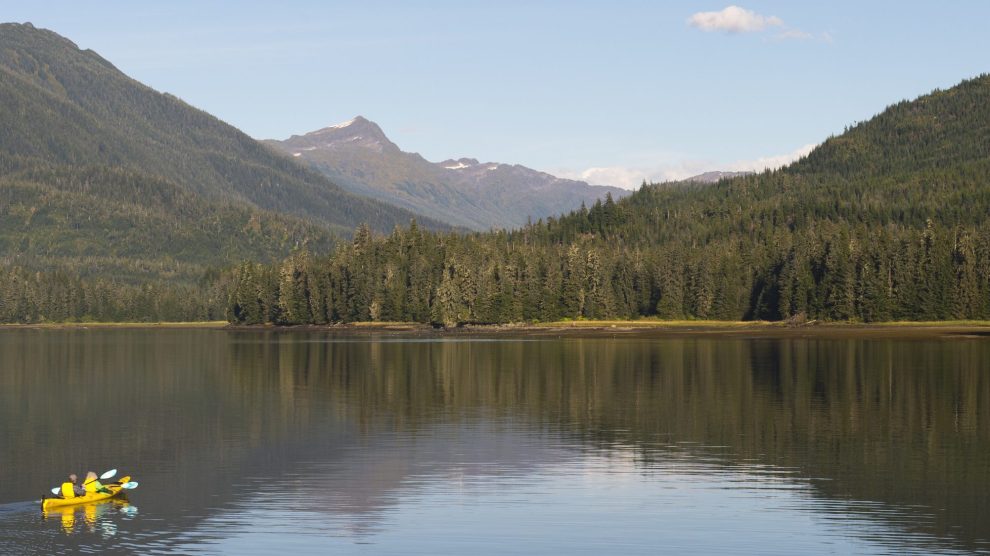 The Trump administration this week proposed ending the so-called Roadless Rule, which banned logging, development, and road construction in Alaska’s Tongass, the biggest national forest in the US. If the USDA Forest Service has its way, it would “remove all 9.2 million acres of inventoried roadless acres and would convert 165,000 old-growth acres and 20,000 young-growth acres previously identified as unsuitable timber lands to suitable timber lands.”

If you’re thinking that opening up the Tongass for road-building and logging might have some environmental consequences, it’s actually far worse than you can imagine. Clear-cutting the Tongass, or even just laying down roads, will have hidden yet dire knock-on effects that ripple through this dynamic ecosystem and even spread to rivers and the sea.

When logging removes trees, it doesn’t just assault the biodiversity of the local vegetation. For one, opening up a gash in the forest changes the dynamics of what you leave intact. In this part of the world, it’s usually too wet for the forests to refresh with wildfires, which in places like California clear out brush to make way for new growth. Instead, the Tongass relies on heavy winds to blow over trees, dispensing with the old and making room for the new to grow.

That natural process is supercharged if humans modify the environment. “Once you have a clear cut, then the remaining trees or the edge of the forest becomes much more susceptible to what we think of as windthrow, or wind disturbance,” says Northern Arizona University ecologist Michelle Mack, who studies forests. This exposure also imperils species like moss, which rely on a moist, dark environment to thrive, but are now left to dry out in the wind and sun. You see the same thing happening with deforestation in the Amazon: Leaving islands of rainforest surrounded by farmland doesn’t just trap the animals there—it transforms the dynamics of vegetation at the edges.

Gouging a road through the Tongass will have the same effect, as vegetation on either side struggles to cope with the exposure. And add to that stress the potential to introduce invasive species as the area develops. “One nice thing about most Alaskan forests and tundra is they’re relatively resistant to invasion,” says Mack. Roads and clear-cuts, she says, remove some of that protection. Equipment brought in from afar might carry seeds that can take root and out-compete native species, as well as winged insects that can spread even faster in the stressed-out forest.

In a healthy forest like the Tongass, the tree canopy captures rain and snow, a process known as interception. This actually controls the amount of water runoff in the ecosystem, as what’s caught in the canopy evaporates back into the atmosphere. “So when we remove the forest canopy, we remove this protective layer,” says John Pomeroy, a hydrologist at the University of Saskatchewan. “We have much more snow and rain hitting the forest floor—or what was the forest floor.”

With fewer trees the soil can come loose, which all that extra water picks up and washes into rivers, where it either directly kills fish by choking the water with muck or indirectly by cutting off the light for aquatic vegetation like eelgrass, in which fish species breed. From the rivers the sediment flows into lakes and the sea, altering those environments too. “The erosion sometimes can be spectacular,” says Pomeroy. “It can be massive landslides, saturated hill slopes collapsing downstream.”

As these habitats falter, processes hidden underground descend into chaos. Networks of fungi known as mycorrhizae, which form symbiotic relationships with tree roots to move nutrients and water, begin to fragment. “They can even move water uphill,” says Pomeroy. “Once the trees are dead, you lose the whole microbial ecosystem that relies on being under the forest canopy.” Soil chemistry can also change dramatically, as the dynamics between water and trees shift.

In the Tongass, all these complex interactions have developed over centuries. So if you clear-cut a forest, it’s not just going to bounce back in a couple years, fully stocked with all the original organisms acting out their original relationships. “Sure, you can cut a tree and get another tree to grow and it will start to look big after three decades, but it won’t begin to function like those old-growth trees for many, many centuries,” says Pomeroy.

Not only are mature forests managing water supplies, they’re managing their local climate as well: A northern forest’s surface temperature on a summer day hovers around 70 degrees Fahrenheit, while a clear-cut area is more like 100 degrees. And old-growth forests affect the global climate, too, by capturing CO2 and helping save us from this mess we’ve made.

The challenge, says Rick Steiner—who runs the conservation group Oasis Earth, in Anchorage—is that the threat is coming both on a federal level from the Trump administration and on the state level from the governorship of Mike Dunleavy. Dunleavy, according to The Washington Post, has asked Agriculture Secretary Sonny Perdue to exempt Tongass from logging limits. “They see dollar signs in the forest, they don’t see trees in the habitat,” says Steiner. “And it’s about as bad as it has ever been here in Alaska right now. It’s unbelievable.”

Now more than ever, we have to see the forest for the trees, or face ecological doom.