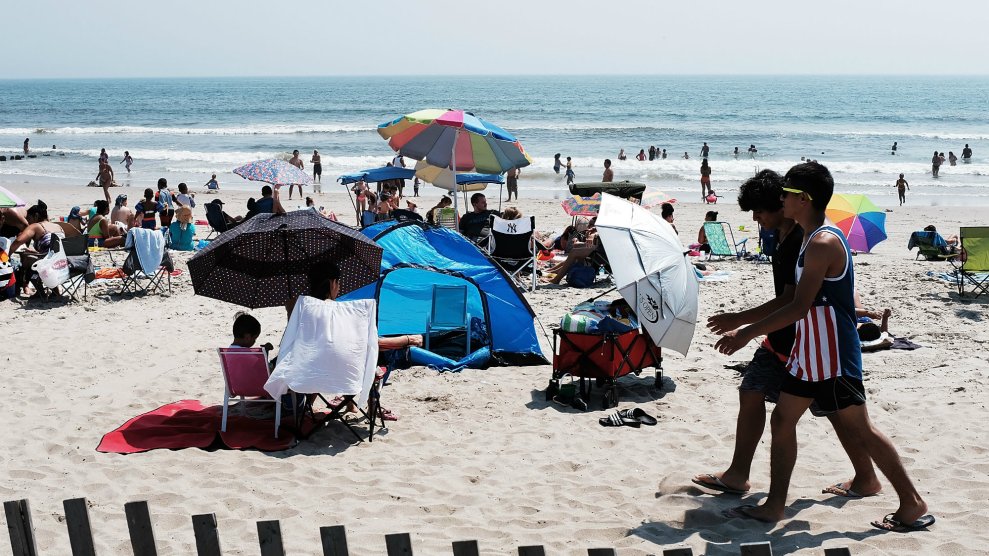 People enjoy an afternoon along Rockaway Beach on a hot summer day on August 22, 2017.Spencer Platt/Getty

Last year, right before Memorial Day, the business owners of Rockaway Beach got a terrible shock. New York City officials abruptly declared that a popular 12-block section of beachfront would be closed for the summer, and perhaps indefinitely.

The reasoning was harsh: The rapid erosion of sand along the peninsula’s Atlantic-facing shore meant that there wasn’t enough room for people to safely stroll or swim. “This decision was made in the interest of safety, and that will always remain our top priority,” said Parks Department commissioner Mitchell Silver.

Silver was heckled by angry locals at his announcement; later, a mock funeral was staged for the doomed beach. Melinda Katz, the Queens borough president, also made her displeasure known. “This will significantly hurt the local community and Queens economy during the vital visitor season,” she said. “The closure of 12 blocks of the Rockaway Beaches is unacceptable, and the Rockaways deserves better.”

A slender necktie of sand that dangles into the Atlantic Ocean southwest of JFK Airport, the Rockaways are home to more than 120,000 people. Every summer, the area blossoms into an unlikely beach town: cafés, boardwalk snack shacks, and surf shops cater to locals and the DFDs (“down-for-the-day,” in local terminology) who arrive en masse from Brooklyn and Manhattan by subway, car, and ferry.

Parts of the 10-mile peninsula have gentrified in recent years, especially since Superstorm Sandy ripped apart the boardwalk and numerous homes. A wave of reconstruction funds and disaster relief brought the far-flung community wider outside attention. “To this day, people tell me they never heard of the Rockaways until the storm,” a real estate agent told The American Prospect last year.

I count myself among the interloping masses. A California native, I fell in love with this New York neighborhood after a surf session in 2017. I’ve kept returning for weeks at a time for the forgiving waves and welcoming scene, bringing old friends and making new ones on my board. Last year’s sudden beach closure was actually a happy thing for surfers, who were still allowed in our usual permitted section of water. But sunbathers were penned up in a comically small section to to the west, dimming business prospects for concessioners on the newly rebuilt boardwalk.

The lost sales weren’t necessarily the worst part. The disappearing sands of Rockaway had long been known to locals. Well before Superstorm Sandy caused $19 billion in damage in New York City, wind and water was already dragging away the soft sand that blankets the delicate barrier beach. The process is natural, but it is exacerbated by climate change’s ravaging storms and rising seas. It started up again after 2013, when the U.S. Army Corps of Engineers “nourished” the Rockaway shore with 3.5 million cubic yards of sand, a handful of rock jetties, and a protective pasture of planted dunes.

In recent years, government officials outside of Queens have seemed apathetic to the problem, until the parks department shuttered the beach at the very last second. “The community repeatedly warned the city that without permanent protective measures, the sand would soon need to be replaced again,” Katz said last year. “The consequences of the city’s failure to act earlier will be disproportionately borne by the Rockaway community.”

That’s a familiar feeling for many people who live here. Rockaway began its modern existence as a summer retreat in the 19th century. Middle-class New Yorkers cooled off in clumps of bungalows, enjoying the long boardwalk, amusement park, and concession stands that dotted the sand.

Destructive gales whipped through over the years, but you might say that Robert Moses was the first superstorm. In the 1950s, the infamous master-planner launched an urban renewal campaign that demolished old homes and tenements along Jamaica Bay, turning much of Rockaway into a patchy landscape of vacant lots, high-rise apartments, and clusters of public housing. With the addition of a subway line and two bridges to Brooklyn, plus a zoning regime that created a very wealthy, very white community at the western tip, it became a place that poor and working-class commuters could afford to live year-round.

Today, a sharp economic and racial gradient defines the slender peninsula, with poverty and color pressed into its eastern end. In Far Rockaway, more than two-thirds of residents describe themselves as African American or Hispanic, and nearly a quarter live below the poverty line. It’s common for children growing up poor in Rockaway to never learn to swim, Louis Harris, a longtime local and founder of the East Coast Chapter of the Black Surfing Association, told me in 2017.

After Sandy, relief funds served the more affluent sections of the peninsula, leaving many poor residents unable to rebuild or remain. A study by the John Jay College of Criminal Justice comparing Rockaway’s post-storm recovery to that of low-income communities in Manhattan’s Lower East Side found that the latter neighborhood was better able to advocate for funds, thanks to established network of anti-gentrification activism. Isolated and segregated, the Rockaways experienced more of a shock.

Today, the most rapidly changing section—the blocks with the board shops, wine bars, and $120 hand-stitched swimsuits—is smack in the middle of the peninsula. In spite of the persistent hurricane threat, home prices have gone up and up since Sandy. While plenty of year-rounders welcome the amenities and economic boost, it’s an uneasy balance for others. In 2014, a young rapper named Sean Blaise released a music video lambasting the “Nazi pizzerias” and “white bro” taco stands that were supplanting the businesses he knew from his youth. “It all centers around this idealized vision of a beach community. They turned it into some behemoth fake paradise of surf culture and fish tacos,” he told Gothamist at the time.

And the beach remains vulnerable, too. A 2017 report by the Waterfront Alliance estimated that 61 percent of Rockaway residents stood a 50 percent chance of a major flood in their homes by 2060. The U.S. Army Corps has a long list of projects to battle erosion and mitigate future storms, such as more rock jetties on the beachfront and a protective barrier on the peninsula’s bay side. But these remain un-started, despite years of the agency promising action. Plenty of residents suspect they’re just one more mega-storm away from losing their beloved shoreline forever. The shifting neighborhood demographics can add to that sense of precariousness; the locals wearing t-shirts printed with “Defend Rockaway” can be read as a response to both forces of change.

But after foot traffic dipped last summer, this year brought a booster shot to the shore. A $13 million beach replenishment project—a joint effort from the Army Corps and the city—dumped 348,000 cubic yards of sand on the stretch that had been closed, just in time for the busy season. It’s only a stopgap measure. But at least for now, the shoreline is its bustling old self. “This summer has been gangbusters busy,” a bartender at a boardwalk watering hole told NY1 in July.

This week, I’m back, too, housesitting for a friend, and paddling out into the easy-going waves in the evenings. A brief rainstorm rolled through yesterday, kicking up three- and four-footers in the evening. Last night, I sat on the shore, watching braver surfers dive under the moving swell and reappear in the moonlight. To the west, a smattering of fireworks lit up the sky; behind me, the high-rise towers of a 1950s affordable housing block loomed. Hard and soft, disappearing and emerging at once, Rockaway is my kind of beach town. I’ll hold on as long as I can.