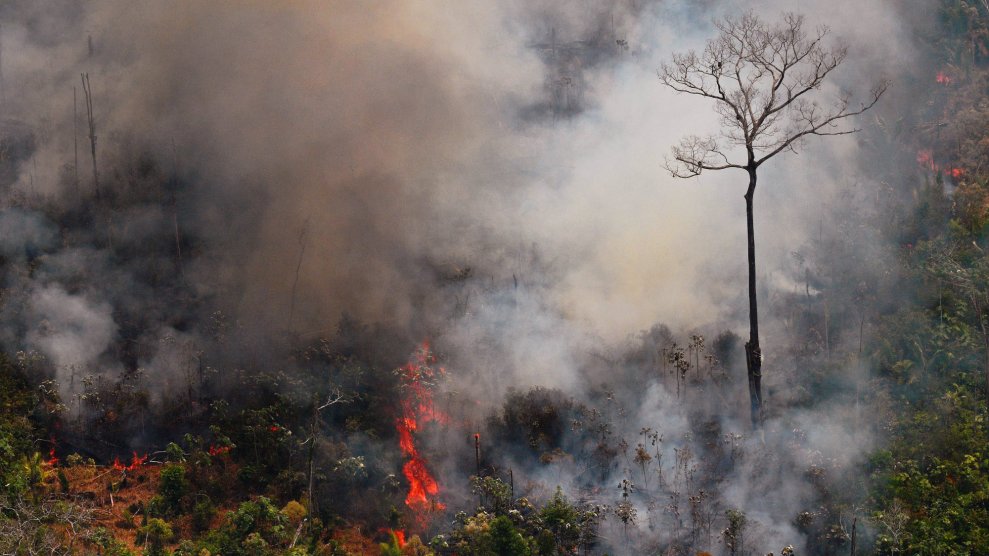 Brazilian President Jair Bolsonaro took power this year promising to open the Amazon rainforest to industry, roll back environmental and indigenous protections, and stack his Cabinet with ideologues who dismiss climate change as a Marxist hoax.

But the record wildfires now raging in the Amazon offer a terrifying rebuke and serve as a stark reminder of what’s at stake as Bolsonaro’s policies allow ranchers, loggers, and miners to destroy the world’s largest forest and repository of carbon dioxide at an unprecedented pace.

It was only the latest of what new research this week found to be a record year for wildfires in the Amazon. Satellite data from Brazil’s National Institute for Space Research, or INPE, showed an 84 percent increase over the same period last year.

The disaster eerily paralleled the historic storms and wildfires that rocked the United States in 2017, just as President Donald Trump—to whom Bolsonaro is often compared—began his assault on environmental regulations and announced plans to withdraw from the Paris climate accords.

Fires are common in the Amazon during the region’s dry season, but this year has not been drier or windier than normal, experts have said, meaning many of the outbreaks have likely come from ranchers and farmers. And many environmental advocates have pointed to rapid destruction of the forest as the driver in the spread of the flames.

“It’s not a revenge of nature; it’s something very, very human,” said Nurit Bensusan, a top official at the Instituto Socioambiental, a Brasília-based nonprofit that advocates for conservation and indigenous rights. “It’s a sign of worse things to come.”

The fires come after INPE data detected an 88 percent uptick in deforestation in June compared with the same month a year earlier. It’s a remarkable reversal. In the late 2000s, Brazil ramped up environmental enforcement and dramatically reduced deforestation as its economy grew by roughly 8 percent per year. But as economic growth slowed, the acreage of Amazon cleared each year increased, particularly after center-right President Michel Temer took power in 2016.

Bolsonaro accelerated the upward trend. The right-wing president who relied on the backing of influential agribusiness interests to win election in 2018 has loosened or attempted to eliminate environmental protections over the Amazon, and Brazil is now felling trees at a rate of roughly one soccer field per minute. By July, the Amazon lost an additional 520 square miles of forest—an area roughly the size of Los Angeles. At the start of this month, the president sacked his space agency chief in what was widely seen as a retaliation for publishing data that conflicted with the Bolsonaro administration’s agenda.

The move was only one of Bolsonaro’s most brazen. Before his inauguration, he named Ernesto Araújo, who railed against the leftist “ideology” of “climatism,” as his foreign minister. For environment minister, he appointed Ricardo Salles, who questioned human-caused emissions’ role in warming the climate and mocked assassinated environmentalists. Almost immediately after taking office, the president shifted control over indigenous reservations from the agency devoted to tribal welfare to the Ministry of Agriculture, overseen by a top ally of agribusiness. His administration muzzled environmental enforcement agencies and hastened approvals of new pesticides.

The increased pace of deforestation, experts have warned, is pushing the Amazon closer to a “tipping point” past which it will not be able to recover—precisely what scientists worried would happen if Bolsonaro won last year’s election and pursued his promised agenda.

“When Bolsonaro discourages law enforcement from stopping deforestation, he is sending a message to those who are interested in destroying the Amazon,” federal congressman Alessandro Molon, the opposition leader in the lower house of Brazil’s bicameral legislature, said in a WhatsApp message Wednesday. “Bolsonaro dismisses scientific data and facts to focus on his personal beliefs. This is absolutely irresponsible! The consequences of the president’s acts will be felt by the entire planet.”

Driving deforestation is the world’s surging appetite for red meat. Brazil is the world’s second-largest producer of beef after the United States. Even before Bolsonaro took office, corporate meat giants were grazing cattle in protected areas with relative impunity, according to a joint investigation published this year by The Guardian, Repórter Brasil and the Bureau of Investigative Journalism.

More than a quarter of the deforestation that occurred globally from 2001 to 2015 was due to the conversion of land for the production of commodities like beef, soy and wood fiber, a 2018 study published by US researchers found.

The ongoing crisis in Brazil is exactly the type of unobstructed exploitation that a United Nations report earlier this month warned must end in order to avert catastrophic planetary warming. As much as 76 percent of the planet’s ice-free land has been altered by humans. And agriculture, forestry, and other land use currently account for approximately 23 percent of total human greenhouse gas emissions, according to the findings.

Forests like the Amazon are key to limiting future warming, as the United Nations’ Intergovernmental Panel on Climate Change drove home in a separate report late last year.

“The Amazon not only contains enormous stores of carbon but regulates local and regional weather regimes,” James Watson, director of science and research initiatives at the Wildlife Conservation Society, told HuffPost in a recent email. “There is clear evidence that when it gets degraded, there are more droughts, more fires and more carbon released, which is a vicious loop you can’t turn back from.”

Though other nations, the United States included, have failed to adequately move to address climate change, the rapid destruction of the Amazon has made Bolsonaro the biggest global villain of the international environmental movement. In August, Norway and Germany suspended millions of dollars in funds provided to Brazil in order to help limit Amazon deforestation.

Bolsonaro also faced protests from environmental and human rights activists in New York in April, when he was scheduled to appear at an event at the American Museum of Natural History. The event was canceled after the museum faced an onslaught of criticism.

But Bolsonaro has attempted to use any efforts to exert international leverage over Brazil to boost his cause instead. He has played up long-standing concerns among Brazilians that efforts to protect the forest could encroach on the nation’s sovereignty and has sought to wield climate change and the Amazon as a political cudgel against leftists, environmentalists and the international community—all frequent targets of a president who has placed several so-called anti-globalists into his Cabinet.

“This seems to be at the heart of a lot of what the president believes. It’s not just about climate change—it’s also about globalism, sovereignty and economic development,” said Oliver Stuenkel, an international relations professor at the Getulio Vargas Foundation in São Paulo. “For the president, it’s, if you believe in [climate change], it’s a conspiracy meant to keep Brazil from developing…And he knows this causes agony and outrage among his international opposition.”

After the decisions from Germany and Norway, the president responded with terse insults to leaders of each country, then abruptly shuttered the Amazon Fund’s steering committee. Bolsonaro has also decried domestic and international reporting about the Amazon and criticism from former environmental ministers—eight of whom signed a letter this year saying his policies had increased Amazon destruction—as “fake news,” a message his more rabid followers are eager to help spread.

“The Amazon is ours,” Bolsonaro said at a press junket with foreign reporters last month. “No country in the world has the moral right to talk about the Amazon. You destroyed your own ecosystems.”

The president returned to his habit of peddling conspiracies related to the Amazon on Wednesday, when he suggested that environmental groups may be setting fires in an attempt to discredit him.

“The Amazon is on fire. The president says NGOs may be behind this. The lack of commitment to the truth is a chronic pathology,” Marina Silva, a former environmental minister and presidential candidate, said on Twitter. “This irresponsible attitude only aggravates an environmental disaster in Brazil.”