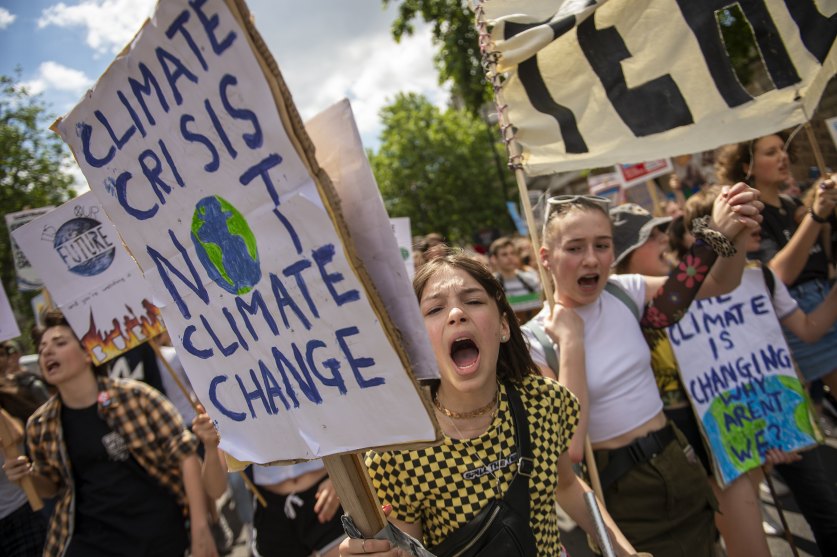 A confidential memo written for the president’s reelection campaign by a top Republican strategist, obtained by Mother Jones, makes a stark concession: The president and his party have “lost the environmental communications battle,” the memo says. “The scientific debate is closing against us.”

The bombshell memo’s acknowledgment, circulated among White House officials and party insiders, includes a tactical tip: Instead of changing policy, just change words. Avoid “frightening” phrases like “global warming” on the campaign trail, and instead use “less emotional” ones that go down easier with voters and conceal the right’s most “vulnerable” weak spot: science. “While ‘global warming’ has catastrophic communications attached to it, ‘climate change’ sounds a more controllable and less emotional challenge,” the memo says. “A compelling story, even if factually inaccurate, can be more emotionally compelling than a dry recitation of the truth.”

Welcome to 2003. The president is George W. Bush, and the memo’s author is pollster Frank Luntz, the longtime guru of political messaging. The memo is all too real. Bush takes the advice, abandons “global warming” in speeches, and marches on with misdirection. The framing war is temporarily won.

Forward to 2019. The same language battles are being waged again, this time on the left: In May, the Guardian found itself in odd agreement with Bush-era Luntz when the progressive newspaper, a leader in climate reporting, announced a fundamental change to its style guide for editors and reporters. The Guardian is ditching the term “climate change” almost entirely and defaulting instead to higher-pitched alarms like “climate emergency, crisis, or breakdown.” The paper had reached the same conclusion as the pollster: “Climate change” is a timid label—as much a dud on the page as Luntz figured it would be at the ballot box.

At least one news outlet is on board with the Guardian. Canada’s national public broadcaster, CBC, briefed its reporters to say they can take the Guardian’s style lead and default to “crisis” and “emergency” as first-choice nouns. Similar chats are underway internally at the Washington Post, the Los Angeles Times, and the New York Times, but none has signaled agreement.

Other publications aren’t so sure. “Should we be calling climate change a ‘climate crisis’?” asks a headline on the science site Earther.

It’s the wrong question to ask. This is a false choice. Climate change is a crisis. Both nouns apply. Call it either. Call it anything accurate, but choosing between them is a decoy debate. Nouns are not the gamechanger here. Verbs are. Verbs carry the action (and inaction), reflecting what we do (or don’t do) about a looming catastrophe, and how we relate to it. How many progressive publications and pollsters still misuse verbs like “believe in” and “don’t believe in” to describe attitudes toward facts? You can’t “believe in” climate science. You can accept or deny it. Let’s bury the language of belief for settled science. Standardize “accept” and “deny” or “dispute.”

What’s happening here is that we’ve come up against the limits of sanitized journalism’s ability to describe an unfolding horror. New York magazine’s David Wallace-Wells, author of a frankly alarmist cover story headlined “The Uninhabitable Earth,” spoke to this problem when he described having written the piece “consciously outside the boundaries…of what was considered responsible storytelling about climate.” The old, sober way of covering the topic, he said, “was not serving the story all that well.”

The Guardian is likewise recalibrating its style to capture the heightened urgency of the moment, which the industry’s standard of feigned neutrality not only failed to convey, but actively helped to cover up. It took the BBC until late 2018—late 2018—to apologize to its own staff for getting climate coverage “wrong too often” by telling editors that denialism deserves equal space in stories about climate. The style and storytelling of climate journalism have failed us for so long—mobilized so few readers, evoked so little of the stakes, and framed stories in a tone so punishingly dull and dry—that news outlets are finally forced to fast-track new vocabulary to match the moment. These aren’t failures of journalistic vigor so much as structural defects in the industry. As the business of journalism consolidated over the first half of the 20th century, journalism itself began to insist on an ethic of neutrality in all things, a studied grayness not just in politics and ideology, but in language and tone. You can’t paint a portrait of a looming apocalypse with a palette of grays.

The Guardian’s style memo is a bit clumsy, but it’s clumsy in the right way. At the very least, the paper is plainly aware of the stakes. Just weeks ago, the White House blocked a senior intelligence analyst at the State Department from using the words “catastrophic” and “tipping point” to describe climate science in written testimony to Congress. The Trump administration shut him up because the science doesn’t “jibe” with its policies, according to internal documents. The analyst quit in protest a few days ago. The White House may not care about the science, but it understands better than most media companies that the fight over the planet’s future has to be waged on all fronts, even at the level of vocabulary.