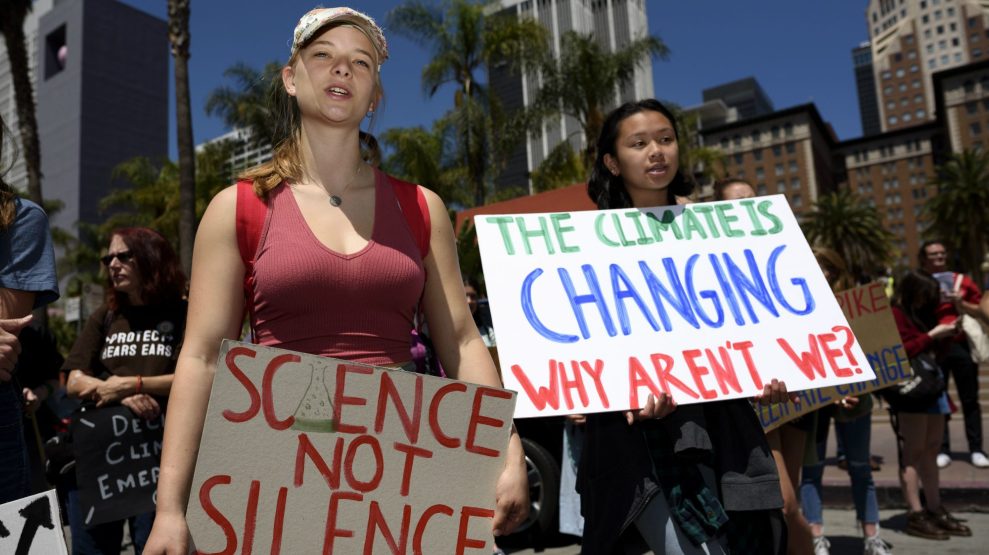 In September 2017, San Francisco experienced its hottest day on record, with temperatures reaching a searing 106 degrees. Weeks later, the city joined Oakland to announce it would sue five major fossil fuel firms—BP, Shell, Exxon Mobil, Chevron, and ConocoPhillips—for the costs of building sea walls and other infrastructure to protect residents from global warming.

When the case reached court the following year, federal district judge William Alsup ordered a tutorial on climate change in which he asked both sides a series of pointed questions, including what caused the planet’s ice ages and what the main sources of CO2 in the atmosphere were. In the news media, the trial was cast as a possible “Scopes” moment for climate change, a reference to the seminal 1925 Tennessee trial in which evolutionary theory was pitted against Biblical teaching.

The cities called on a number of expert witnesses, including Myles Allen, a professor of geosystem science at the University of Oxford. By walking the judge through the century-long history of climate science, punctuated with rapidly ascending line graphs, the witnesses brought global warming to the court’s attention in a way that left no doubt about how credible a threat it was. The fossil-fuel companies, meanwhile, took a different tack. Chevron’s evidence during the tutorial was presented through a lawyer, who acknowledged the role of human activity in climate change but denied the company could have known the future implications of its actions and said a court wasn’t the right place to deal with the issue. Statements submitted by the other defendants were largely in line with Chevron’s presentation.

Filed alongside the case were two amicus briefs—documents produced by someone who is not a direct party in a case, but has an interest in the subject at hand—questioning aspects of climate science. They were written by well-known climate skeptics and promoted by the Heartland Institute, a libertarian organization with links to the fossil fuel industry. Alsup challenged the briefs’ validity and asked who had funded the research behind them, which turned out to include fossil fuel firms such as Peabody and Exxon Mobil.

“Maybe 10 years ago they would have been called, but I think it’s recognized now that it’s become so discredited that it’s not worth putting them up.”

In the end, Allen said, the defense chose not to call on those climate skeptics when presenting its formal evidence in court, a sign of how much progress has been made in climate science and public understanding over the past decade. “Maybe 10 years ago they would have been called, but I think it’s recognized now that it’s become so discredited that it’s not worth putting them up,” said Allen.

Alsup ultimately dismissed the case, ruling that while the evidence of climate change is real and persuasive, the courts are not the proper place to decide issues of such global magnitude, deferring the matter to the legislative and executive branches. Even so, his overall sympathy to the science and the short shrift he gave climate change denial show how the basic facts of anthropogenic global warming are increasingly being accepted in law. Indeed, other jurisdictions in the United States and abroad now regularly hear about the effects of global warming and the threats it poses. And campaign groups, individuals, and public authorities involved in the burgeoning field of climate litigation are testing out various legal strategies to try to force recalcitrant governments and companies to cut their emissions faster and to get compensation for damages.

“I think the real reason you don’t see the basic science challenged much in these cases is that courts are places of inquiry where the standards of reliability are reason and evidence rather than tweets, falsehoods, and the kind of manipulative discourse that you hear in the political sphere,” said Douglas Kysar, the deputy dean of Yale Law School. “In the US, I don’t even imagine a case where there is a jury hearing a liability issue that you’d see a vigorous attack on the underlying science.”

Oakland and San Francisco are now appealing Alsup’s decision, but the judge’s active engagement with the science was nonetheless in stark contrast to a Supreme Court case 12 years earlier, involving the Environmental Protection Agency’s responsibility for regulating greenhouse gases. When Justice Antonin Scalia was corrected for confusing the layers of the atmosphere, he blurted out in frustration: “I’m not a scientist. That’s why I don’t want to have to deal with global warming.”

That would be unlikely to fly today, and Kysar notes that expert testimony in most courtrooms is subject to rigorous admissibility standards. “The courts’ legitimacy and credibility is not based on the power of the purse, having an army, or being elected; it’s based on making pronouncements that seem to be driven by evidence, reason, and principle,” he said. “So when they’re making scientific claims about what actions are causing what effects in the world, they want to be quite sure they’ve got it right.”

“I would expect almost every judiciary will have a climate case before it at some point in the next couple of years.”

Kristin Casper, litigation counsel for Greenpeace’s Global Climate Justice and Liability campaign, said judicial awareness of climate science will continue to grow as public awareness and acceptance increases. “I would expect almost every judiciary will have a climate case before it at some point in the next couple of years,” Casper said. One example: In 2017, an Australian judge was asked to determine whether an open-cut coal mine should be built in Gloucester, New South Wales. The Rocky Hill Coal Project had been denied permission by the state’s planning minister.

In a masterclass of science communication, Will Steffen, emeritus professor at the Australian National University’s Climate Change Institute and a member of Australia’s Climate Council, explained how the world has already vastly overcommitted to spending its carbon budget. He gently led the court to the conclusion that any project which opens up new fossil fuel deposits is incompatible with the Paris Agreement on climate change which most countries signed in 2015. “I wanted to make sure that the chain of logic we used in a scientific approach came through very clearly,” Steffen said. In February 2019, the judge refused to approve the Rocky Hill project in a judgment that extensively referenced Steffen’s testimony.

In other countries—particularly in Europe—public acceptance of climate change science is broader and is often reflected in legal cases. When the Urgenda Foundation, a Dutch organization devoted to promoting use of renewable energy, challenged the Dutch government’s strategy to curb greenhouse-gas emissions in 2015, it deliberately chose not to put forward any climate experts as witnesses. Urgenda’s legal counsel, Dennis van Berkel, said they based their case entirely on official reports from the United Nations Environment Program (UNEP) and the Intergovernmental Panel on Climate Change (IPCC), of which the Netherlands is a member. “We wanted to have a discussion on the law, not the facts,” van Berkel said. “So it was very much our goal to present the facts as they were acknowledged by the state themselves.”

The Dutch government didn’t dispute that climate change is real, but it disagreed that it had to act as quickly as campaigners wanted. It had already set a target to cut emissions by 2020 but was unlikely to meet it. Urgenda responded by presenting evidence from the IPCC and UNEP showing that delays in confronting climate change would exacerbate its risks and costs. Van Berkel said politicians often argue that it’s too expensive to act on climate change. “But that argument came up short in court because there was no way to substantiate it,” he said, “because the reports all read in the other direction.”

In 2015, the judge agreed, ordering the Netherlands to cut its emissions by 25 percent by 2020 compared to 1990 levels. The Dutch government is appealing the decision in the Netherlands’ Supreme Court, where the final argument is likely to revolve around an interpretation of human rights law. But it was the first time a court had forced a government to act on climate change, and it inspired similar cases in Ireland, Switzerland, New Zealand, and Pakistan.

Of course, judges still have to address knotty questions about who is ultimately responsible for putting emissions into the air, who should stop it from happening, and who should pay for the consequences. Answers will only come as more cases go to court, and it seems likely that plaintiffs will be helped by the accumulation of scientific evidence analyzing the extent to which climate change contributes to sea-level rise or extreme weather, and how much can be traced to particular companies.

But even if climate litigation doesn’t succeed, it has helped to shift the tone of public debate, as is clear with one of the most important cases currently going through the courts. In Juliana v. United States, a group of 21 young people claim inaction on climate change violates their fundamental constitutional rights to liberty, life, and property. While the Obama administration initially attempted to dismiss the case, filed by the nonprofit organization Our Children’s Trust in 2016, its lawyers didn’t dispute many of the stated facts about climate change. And even now, Kysar said, despite the current climate-change skepticism guiding the Trump White House, the department’s new political appointees can do little to change its formal response.

“If they tried to file an amended answer which went back on those stipulations,” said Kysar, “they would have looked like a laughing stock.”

The Juliana case has many procedural and institutional hurdles to overcome before it reaches trial. Earlier this month, a panel of judges heard arguments from both sides on whether the case should be allowed to proceed. But if it does, Kysar believes it will be very hard for the government to win.

“What it would have to say is that, although we stipulate to all these facts about the existential threat that we are substantially contributing to through our actions and inactions, we don’t believe that it’s the responsibility of government to preserve the basic conditions for civilized life,” he said. “What lawyer wants to make that argument?”