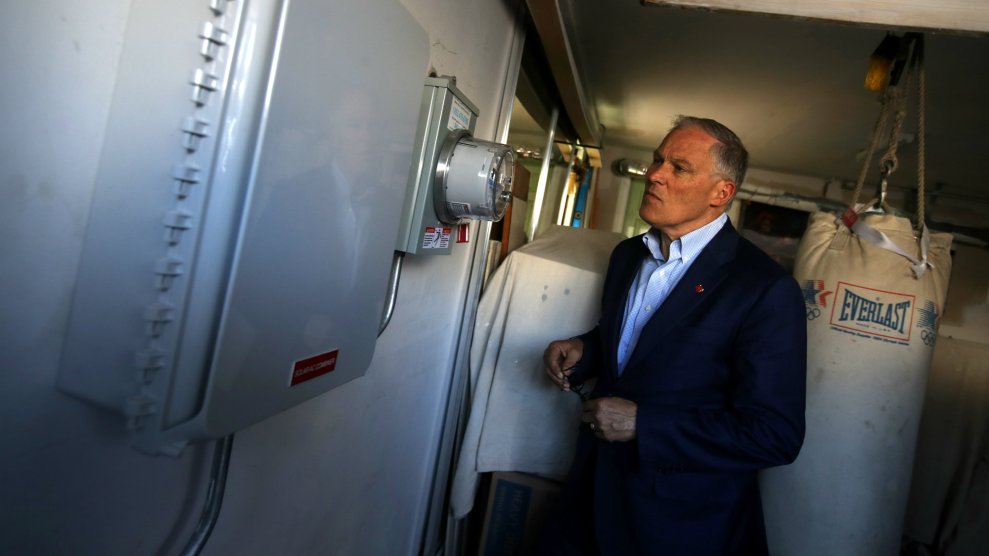 Jay Inslee unveiled a sweeping plan Friday to all but eliminate planet-warming emissions from power plants, automobiles and new buildings, becoming the second contender for the 2020 Democratic presidential nomination to release a climate policy this week.

The Washington governor, who is making climate change the primary focus of his inaugural White House run, said his nearly 2,900-word “100% Clean Energy for America Plan” is the first of a series of policies he intends to roll out before the first Democratic primary debate in June.

The plan calls for shuttering all coal plants and setting a national clean electricity standard that requires 100 percent carbon-neutral power by 2030, leaving room for gas plants equipped with technology to capture and store heat-trapping pollution. It proposes rapidly building out electric vehicle infrastructure and mandating that all buses and new light- and medium-duty vehicles produce zero emissions within a decade. The platform lays out nine separate policies to eliminate emissions from heating, cooling and appliances in new buildings by the end of the next decade.

It’s by far the most ambitious set of climate policies yet proposed, and it comes closer than any other legislative blueprint to the goals outlined by advocates of a Green New Deal. The plan is sparsely detailed and includes no price tags or funding proposals. But it cites existing city- and state-level policies as examples, anchoring a self-described “moonshot” plan to tangible models and bolstering Inslee’s case that, as a governor, he has more executive experience than most of his 2020 rivals.

The proposal, O’Rourke’s first since entering the presidential race, earned mixed reviews. Vox called it “the most robust” proposal in the 2020 fray. New York magazine shrugged it off as “blandly inoffensive.” Both Rep. Alexandria Ocasio-Cortez (D-N.Y.), the face of the Green New Deal, and Sunrise Movement, the grassroots group driving the issue, criticized O’Rourke’s plan for setting too slow a timeline for transitioning from fossil fuels. O’Rourke, whose past support for Republican bills that boosted fossil fuels and his donations from oil and gas executives drew climate activists’ scorn, described his plan as “the most ambitious in the history of the United States.”

That was true until Friday.

“They’re not comparable in how they approached it,” Carlock said.

The most obvious differences are the dollar figures and the timelines.

O’Rourke promised “structural changes to the tax code to ensure corporations and the wealthiest among us pay their fair share,” and he earmarked “more than $1 trillion” for tax incentives, “more than $3 trillion” for federal clean-energy financing and “more than $250 billion” for research and development. Inslee suggests diverting fossil fuel subsidies—estimated at $20.5 billion per year—to fund his efforts but focuses instead on the existing costs of damage from climate change, noting “at least $240 billion per year during the past decade,” a figure forecast “to rise to $360 billion per year in the coming 10 years.”

Deadlines for decarbonization, scientists often say, are relatively arbitrary aspects of emissions policy to which activists give outsize attention because they help to illustrate the scope of the climate crisis. The year 2050, for example, is widely cited as it marks the middle of the century. The year 2030—another eye-catching number—became the favored benchmark for truly ambitious climate policy last October when the United Nations’ Intergovernmental Panel on Climate Change (IPCC) released a dire report detailing the unprecedented emission cuts required to keep global warming within 1.5 degrees Celsius, or 2.7 degrees Fahrenheit. Beyond that point, the destruction wreaked by extreme weather and sea-level rise is expected to top $54 trillion, cause the deaths of millions of people and wipe out countless animal and plant species.

The IPCC report determined that the world must cut gases such as carbon dioxide, methane and nitrous oxide by roughly half by 2030 and reach net-zero emissions by 2050.

O’Rourke’s plan promises to reach net-zero emissions by 2050. That’s a problem, say advocates, because emissions from China, India and Indonesia are still growing at a rapid clip as those countries industrialize and lift millions of citizens out of poverty. The United States, by contrast, owes its tremendous wealth to the fact that it’s historically responsible for more emissions than any other country, thus the speed of the US transition to zero carbon should outpace that of developing economies. Guided by that thinking, Inslee’s three-pronged proposal sets 2030 deadlines.

But what really sets Inslee’s plan apart from O’Rourke’s is its clearer roadmap for how to implement its goals, Carlock said.

Borrowing heavily from the highly praised 100 percent clean electricity bill Inslee signed in his own state last month, the governor promises to set a national standard that would require utilities to retire all coal-fired power plants and rapidly build more solar farms and wind turbines over the next decade. By 2035, the proposal calls for “all-clean, renewable and zero-emission energy in electricity generation.”

To meet those goals, Inslee proposes enacting new refundable tax credits, opening more federal lands to renewable energy development and “accelerating the evolution toward performance-based utility regulation that rewards utilities for delivering affordable, reliable, and zero-emission electricity.” The federal government could finance large-scale projects directly through existing programs such as the Department of Agriculture’s Rural Utilities Service and the Department of Energy’s Loan Guarantee Program, according to the plan. An Inslee administration would provide “direct grants for clean energy projects developed by non-profit and community organizations, local governments, and academic institutions.” The proposal provides no dollar figures.

But the top source of climate pollution in the United States is vehicles. Under President Donald Trump, the Environmental Protection Agency and Department of Transportation proposed reversing Obama-era fuel economy standards that promised to cut oil consumption by 12 billion barrels and halve tailpipe emissions. Inslee proposed not only undoing that reversal but also requiring that all new light- and medium-duty vehicles sold produce no emissions.

Electric vehicle incentives were a cornerstone of Inslee’s pollution reduction policy in Washington, where he vowed to put 50,000 new zero-emission vehicles on the road by 2020. Inslee himself boasts of driving an all-electric Chevrolet Bolt. His national plan calls for expanding tax credits for electric vehicles, providing federal funding to replace all public and school buses with electric alternatives, and making “significant new federal investments to support a diverse and robust American” manufacturing base.

Physical real estate rarely gets as much attention in the climate debate as power plants, industrial farms or cars and trucks. But commercial and residential structures, heated by oil and gas burners, made up nearly 12 percent of US emissions in 2017, EPA data shows, larger than the entire agriculture sector.

Inslee proposes a national “Zero-Carbon Building Standard” by 2023 that will serve as a guideline for state and municipal building codes and provide incentives for landlords to “rapidly adopt sustainability.” The proposal cites the city of Los Angeles’ rollout this week of a Green New Deal program that mandates all new buildings to be carbon-neutral by 2030 and gives existing structures until 2050 to make the retrofits required to match.

Inslee proposes “dramatically” increasing federal funding for such retrofits, and linking energy and climate pollution standards to expanded federal support for new construction projects through the Department of Housing and Urban Development and the Community Reinvestment Act. The plan specifically calls for “renewing federal funding for the Energy Efficiency and Conservation Block Grant Program” and promises to direct federal agencies to tighten energy efficiency standards for appliances such as water heaters and clothes dryers.

What’s missing from the governor’s proposal is notable. The plan promises “guaranteed support for workers” displaced by the transition from fossil fuels and specifically calls for “family wage” jobs and union labor, but it offers few specifics. It only whiffs at “pollution-reduction strategies” for a host of other emission-heavy sectors, including heavy-duty vehicles, aviation and shipping. The proposal doesn’t include ideas to expand public transit or densely built, affordable housing. Nor does it mention agriculture at all, despite the increased focus that Inslee’s 2020 rivals Sens. Elizabeth Warren (D-Mass.) and Bernie Sanders (I-Vt.) are putting on corporate farming giants and rural antitrust issues. Foreign policy, a key arena for the world’s mightiest military power to shape climate efforts, isn’t part of this proposal.

An Inslee spokesman said this proposal was just the first of many and “there’s a lot more coming” in the weeks ahead.

Inslee is running far behind in a crowded field of more than 20 presidential contenders. He’s polling at less than 1 percent. The environmental newswire E&E News‘ headline on a writeup of Inslee’s CNN town hall last month described the governor as “pleading” for more supporters in an attempt “to save his candidacy.” Climate change is becoming a top concern for Democratic voters—Monmouth University‘s poll of Iowa Democratic voters last month found the issue was second-most important being health care—but single-issue campaigns rarely go far in presidential races.

But it’s early in the race, and the governor is making a splash in his own ways. Last month, he started a petition to demand that the Democratic National Committee schedule a debate exclusively focused on climate change and urged his rivals to back him up. So far just two—Sen. Kirsten Gillibrand (D-N.Y.) and Julián Castro, the former housing and urban development secretary, have answered his call.