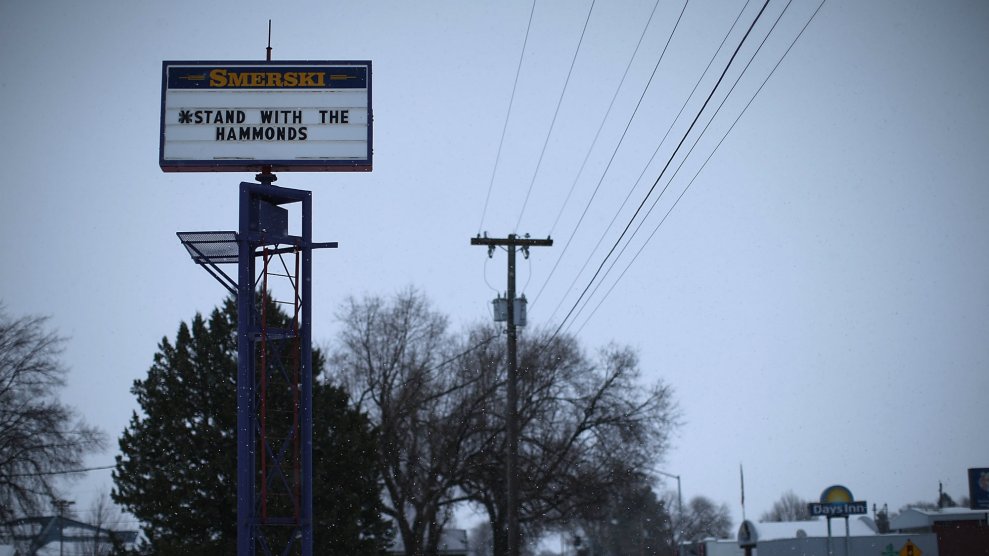 A new BLM assessment states that Steven and Dwight Hammond's cattle reduce fire risk in an area that hasn't been grazed for five years. In January 2016, a sign expressed support for the jailed ranchers.Justin Sullivan/Getty Images

Oregon ranchers Steven and Dwight Hammond are known for starting fires, both literally and figuratively. Range fires they’ve set put them in jail, twice, on federal arson charges. Meanwhile, the passions they ignited in people like Ammon Bundy helped set their northern corner of the Great Basin ablaze, when Bundy led armed militiamen in an occupation of the Malheur National Wildlife Refuge — partly to protest the Hammonds’ incarceration. Now, the Bureau of Land Management wants the Hammonds and their cows to help reduce wildfire risk.

Last year, President Donald Trump pardoned the ranchers, ending the jail time they were still serving for lighting wildland fires that endangered federal firefighters. Then, in January, then-Interior Secretary Ryan Zinke reissued their grazing permit, and the Hammonds returned to ranching. On April 9, the BLM released a new environmental assessment for grazing on the Hammond Allotment, one of the largest of several the family uses in the high desert of eastern Oregon, where rolling hills are broken by rocky outcroppings. The BLM says cattle have not grazed the land for five years because the ranchers’ permits weren’t renewed in 2014.

After years without grazing the allotment has become a wildfire risk, and locals have sent letters to the BLM, voicing concern. The agency’s plan would authorize the Hammonds to graze cattle to help reduce that risk. In many ways, it comes as the anticlimax to decades of disputes between the Hammonds and federal land managers. Facilitated by Trump’s pardon last year, it represents a return to business as usual in an area where ranching interests have significant sway over land-management policies.

BLM planning documents show a landscape transformed from over a century of agricultural use—and a reluctance to reverse this trend. More than 6,000 acres of the allotment are considered priority habitat for the greater sage grouse, a declining species that serves as a litmus test for the health of sagebrush ecosystems. But the BLM sidesteps habitat concerns in the planning because most of the bird’s habitat has already been altered by decades of grazing and seeding invasive species. The document says grazing could now benefit the sage grouse by reducing wildfire risk.

Grazing impacts to microbiotic soil crusts, which can help prevent erosion, are also not a current issue. That’s because BLM scientists couldn’t find any topsoil-saving crusts. “This may be due to the complicated disturbance history of the area, historic improper grazing, and cultivation/herbicide preparation for planting crested wheatgrass,” the assessment says.

The environmental assessment also addresses whether cattle could damage Native American historical objects: “If cultural resource sites are located within existing livestock congregation areas, these sites have likely been affected during the last 100+ years of grazing,” the document reads. “Possible effects are continued soil churning up to 12 inches deep…and artifact breakage. These effects are not significant because the site integrity has already been lost.”

These admissions indicate the BLM seems resigned to a damaged ecological and cultural landscape, rather than a deep look at potential impacts and ways to mitigate them. The BLM’s environmental assessment for the Hammond Allotment is open for public comment until April 24. It’s not clear whether additional environmental assessments will be released for the Hammonds’ other BLM allotments. The agency did not respond to requests for comment by time of publication.

While Steven and Dwight Hammond declined to comment, leaders in the livestock industry cheered the presidential pardon and grazing permit reissue. The National Cattlemen’s Beef Association and the Public Lands Council, a national organization that advocates for public-lands ranchers, applauded Zinke’s actions in a joint statement in January: “The reissuance of the Hammond Ranches’ grazing permits is the final step in righting the egregious injustices the Hammonds faced. This is the culmination of years of effort on behalf of this industry to restore a family’s livelihood.” Dwight and Steven Hammond ultimately served three and four years respectively, and paid $400,000 to the federal government.But some environmentalists see recent events as a sign that the decades-old tensions are still smoldering, rather than being extinguished. Steve Herman, a wildlife biologist and former professor at Evergreen State College who has studied the region for decades, likens the renewed permits to the acquittal of the leaders of the Malheur occupation. “I see (the new grazing authorizations) as part and parcel of all those acquittals. It says to me that, you can make death threats … you can start fires, and you’re going to be rewarded not in this case with acquittal, but with a great big package of privilege.”Idaho-based activist Katie Fite of the environmental group Wildlands Defense speculated that the 2016 occupation, paired with Trump’s pardon, sends a message about how public lands are managed in the region. “In eastern Oregon, throw in the whole Bundy Malheur refuge seizure and BLM is going to be treading very, very carefully not to upset ranchers.”