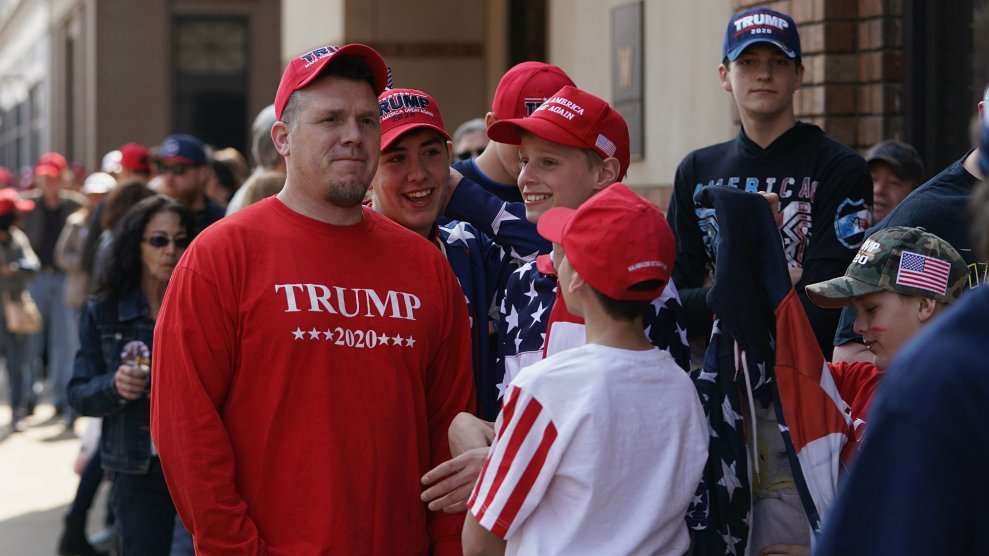 Donald Trump’s indifference, punctuated by bursts of mocking disdain, toward climate change has been indulged and even cheered by his supporters. The president has called climate science “bullshit,” donned a coal miner’s helmet at rallies, and defenestrated federal rules designed to cut planet-warming emissions.

It is becoming harder, however, for Trump to swat away the unfolding crises caused by global warming. American lives are increasingly ravaged by flooding and wildfires, and Democrats have seized the initiative with the Green New Deal resolution, which proposes full-scale social and economic change to eliminate carbon emissions while investing in education, health, transportation, and a federal jobs guarantee.

Now, younger Republicans are breaking with Trump in an attempt to haul their party toward scientific reality.

“I don’t personally know anyone involved in young, right-of-center politics that doesn’t believe climate change is an issue.”

“I think conservatives for a long time have been too willing to just let this be a left-wing issue. We can talk about this. Conservatives that care about the environment do exist.”

Fischer heads campus operations for the American Conservation Coalition, a Republican youth group founded 18 months ago but already with a presence in 125 colleges across the United States, holding events and organizing campaigns. In January, 41 state college Republican chairs signed an ACC letter to GOP leaders urging “action on clean energy and environmental issues” to ensure “conservative values are not lost on the next generation.”

On a recent Monday night, the ACC held a campus event at Temple University to extol the virtues of renewable energy. Temple is a predominately liberal institution based in Philadelphia, and the panel discussion drew about a dozen attendees, with one wearing a red “Keep America Great” hat.

Young Temple conservatives are “subject to severe ridicule and a lot of vitriol from their peers,” said Christopher Smith, president of Temple’s student Republican group. “People call you ‘white supremacists,’ ‘Nazis,'” Smith said. “We’ve all been called that at some point. It’s not nice.”

Very few of these taunts are based on the sharp differences between senior Democrats and Republicans over climate change, pointing to a divide that is partly generational. “Trump’s views are definitely more typical of older Republicans than us,” Smith said.

Almost 60 percent of millennial Republicans agree that climate change is already having some effect on the US, according to Pew Research polling. Nearly half believe the government isn’t doing enough to alleviate the damage.

Older Republicans, the core of Trump’s support, are substantially less likely to back these stances and are much more enthusiastic about coal mining, offshore oil, and gas drilling, with the latter proposition supported by 75 percent of boomer GOP voters compared to 44 percent of millennial Republicans.

There is no guarantee that these positions will stay steady rather than shift rightward in the newest generation of GOP voters. With record numbers of Americans expressing alarm over climate change, it may be that flat denial of climate science is becoming unmoored from political expediency.

The major divisions occur over how to respond to climate change. While the Green New Deal calls for a “10-year national mobilization” to decarbonize the economy, the college Republicans are reticent.

ACC literature at Temple University calls for a “broad range of limited government and market-based policies.” A booklet called “How To Be a Conservative Environmentalist” promotes cutting regulations, as well as subsidies, for solar and wind power and allowing the market to continue to grow the clean energy sector.

“With Ocasio-Cortez there is this sort of alarmism, like ‘We’re all gonna die in 12 years,'” said Fischer. “We have a more methodical, slower approach…The conversation has been so politicized and so left-wing-dominated that it has put people off. That gives us an opportunity to offer a sensible alternative.”

At the Temple event, “climate change” is not uttered in an hour of discussion, rejected in favor of uncontroversial euphemisms like “energy diversification,” the conservation accomplishments of Teddy Roosevelt, and the national security benefits of American-sourced energy.

“We love it when market forces produce a better product, right?” said Chad Forcey, head of a conservative clean-energy organization, to vigorous nods as he flicked through slides showing the plummeting cost of solar energy. The Green New Deal, Forcey said, is “ridiculous. They’ve blended it with socialism and identity politics. What we’re trying to do is something a lot more practical.”

Trump has naturally gone further, falsely claiming the Green New Deal would mean “no more airplanes, no more cows, one car per family.” Republican alternative plans have sprouted from Sen. Mike Lee (R.-Utah), who suggested having larger families will somehow solve climate change, and his House colleague Matt Gaetz, whose Green Real Deal would slash regulations and set no emissions targets. Ocasio-Cortez dismissed Gaetz’s plan as “just so weak” and “so lame.”

A major UN report last year found the world must cut greenhouse gas emissions in half by 2030 to avoid calamitous warming, a task that will require an enormous upheaval in the way societies create energy, raise food, and transport people.

The US has been rattled by record hurricanes and wildfires in the past two years, with government scientists predicting increasingly punishing storms, crop failures, and coastal inundation. Thousands of people are set to perish in heatwaves.

The US Government Accountability Office calculates climate impacts cost the federal government $350 billion in the past decade, with economic losses on course to hit $500 billion every year by the close of the century. A modest tax on carbon emissions, backed by some conservatives, is unlikely to be enough to dodge this future.

“If there was a free market solution to the climate crisis we would’ve seen it in the last 40 years,” said Varshini Prakash, the 25-year-old founder of Sunrise Movement, the youth-led group that helped inspire the Green New Deal. “We don’t have decades to wait. we need to do it in the next decade,” Prakash said. “People are dying from the climate crisis right now. The truly irrational thing to do would be continue on the current trajectory and allow 150 million climate refugees and the complete obliteration of coral reefs.”

Prakash was a campus climate activist herself at the University of Massachusetts-Amherst. “There wasn’t really a robust conversation” with college Republicans on the issue, she recalled.

There’s a realization on both sides, however, that the Green New Deal and growing public concern has cracked open the debate to the degree that Trump reportedly will attempt to campaign on climate change in the 2020 presidential election.

“Young people see the denialism and corruption of Republicans and the insufficiency of action by Democrats. They are fed up with it and want to call it out,” Prakash said.

“This is a generational thing. People saying ‘wait your turn, we’ve got this’ frankly don’t see the urgency because they won’t be around for it. It’s quite obvious that they haven’t got it.”