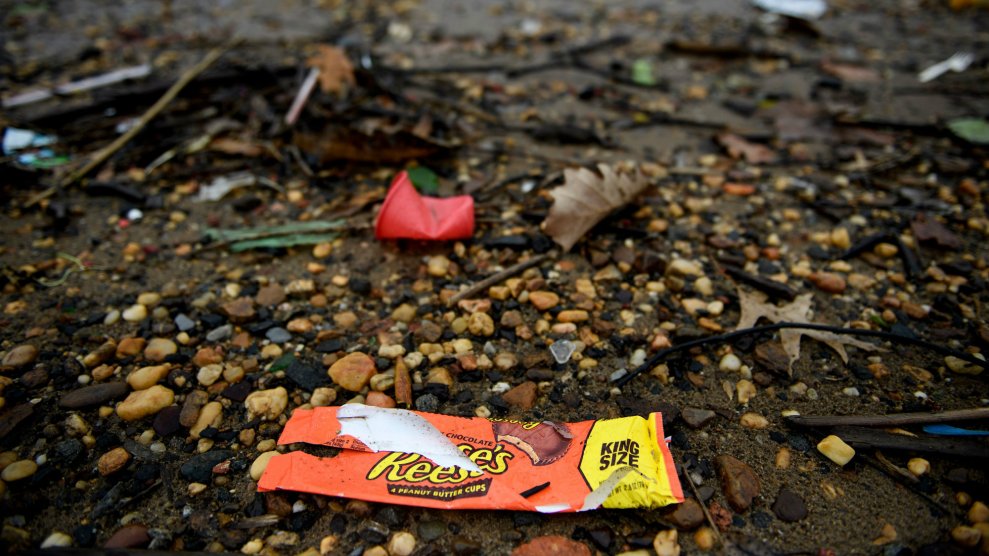 This story was originally published by CityLab and is shared here as part of the ClimateDesk collaboration.

“This facility is our version of Willy Wonka & the Chocolate Factory.”

That’s how Eileen Kao described Montgomery County, Maryland’s recycling center on a tour. Kao, who is chief of waste reduction and recycling in the county’s Department of Environmental Protection, pointed out how machines in the facility help sort recyclables. As she described how the machines worked, a magnet separated steel and tin cans into a storage silo while a shaker table collected pieces of glass that were too small to be sorted. Dozens of workers hand-sorted at certain steps along the process.

Over recent months, news coverage has depicted China’s National Sword policy as a crisis for recycling in municipalities all over the United States. Since early 2018, China has banned many scrap materials and has not accepted others unless they meet an extremely strict contamination rate of 0.5 percent. (Contamination rates of US recyclables before sorting vary from place to place, but can reach 25 percent or higher.) The decision reflects China’s desire to recycle more of its domestic waste. Previously, China had been the destination for about 40 percent of the United States’ paper, plastics, and other recyclables.

National Sword sent waves through the global recyclables market. The changes in China diverted many materials to Southeast Asian countries, whose ports were not prepared to receive them in such high volume. Thailand, Vietnam, and Malaysia have begun to enact their own restrictions.

Meanwhile, many municipal recycling programs in the US have suffered. As of January, Philadelphia was sending half of the recyclables it collects straight to the incinerator. Minneapolis stopped accepting black plastics. Marysville, Michigan, will no longer accept eight of 11 categories of items (including glass, newspaper, and mixed paper) for curbside recycling, in order to cut costs. Deltona, Florida, stopped curbside pickup altogether.

Many recycling and solid-waste organizations, as well as the US EPA, have dedicated resources and staff to “identify solutions to be able to help support recycling here in the US,” according to Dylan de Thomas, vice president of industry collaboration at the Recycling Partnership, a nonprofit that gives grants to and works with communities to improve their recycling programs. The EPA, which has typically left leadership on recycling to local governments, held its first-ever recycling summit in November 2018.

While recycling centers have been closing down in some places, like in greater Birmingham, Alabama, and around California, programs elsewhere are stepping up their efforts to decrease contamination levels in the recycling bin by educating residents about their role in the recycling process. This emphasis on outreach suggests a heavier onus on citizens to stop tossing items absentmindedly into the bin, and start disposing of them in a more informed, deliberate way.

This emphasis on outreach suggests a heavier onus on citizens to stop tossing items absentmindedly into the bin, and start disposing of them in a more informed, deliberate way.

DC. also did a pilot program with the Recycling Partnership to provide curbside feedback for residents. On one route, staff left a note behind for residents who had plastic bags in their recycling bin. Another route was the control, and staff did not leave tags. The route that gave residents feedback in the form of tags saw a 19-percent drop in plastic bags over the course of two weeks. The control route? An increase in bags of 2 percent.

“What we’re suggesting … is being very strategic and consistent with your tagging,” said Cody Marshall, the Recycling Partnership’s chief community strategist officer. “You have to go to the same houses over and over again four to five times with the tagging messages to really have an impact.”

Systematic tagging is an important strategy in the toolbox, according to Marshall, because it’s a targeted intervention to decrease the high contamination levels plaguing many municipalities as they try to bring their bales of recyclables to market. Recycling programs in central Virginia, El Paso, Tampa Bay and Orange County, Florida, and Phoenix are all tracking the impact of tagging on contamination.

The need for systematic approaches to reduce contamination is clear. Even though Americans recycle more now than ever, they’re not always sure what their local recycling program accepts. Increasingly, those mistakes can be costly for municipalities that are trying to sell the recyclables in bales. And, of course, to ensure that even more materials don’t end up in the landfill or incinerator.

“Many Americans are either aspirational recyclers,” said David Biderman, the executive director and CEO of the Solid Waste Association of North America (SWANA), “or they’re confused recyclers. Just because it’s made of plastic doesn’t mean it can be recycled.”

What can and cannot be recycled, as well as how recyclables are separated, differs based on where you live. Montgomery County, for example, has a dual-stream model. Residents have to sort their recyclables into two groups: commingled materials (bottles, cans, and containers) and mixed paper (cardboard and paper). Under a single-stream approach, by contrast, residents throw all household recyclables into one bin, separate only from non-recyclable trash. DC has a single-stream system.

While dual-stream recycling allows the sorting process to begin before waste reaches the facility, single-stream recycling is convenient because people can put everything in the same bin. Between 2005 and 2014, the single-stream model went from being used by 29 percent of American communities to 80 percent, according to one survey. It may lead to people putting fuller bins out to be collected, but the uptake of single-stream recycling has also meant higher contamination rates.

Some communities are switching back to dual-stream in an attempt to bring down contamination. Otherwise, they’re hoping citizens can make better recycling decisions. Ecomaine, a nonprofit that processes recycling for more than 70 communities in Maine on a single-stream model, recently hired a new educator to inform residents about what’s recyclable, what’s not, and why.

“It has certainly been a tough year-and-a-half to two years,” said Ecomaine’s communications manager, Matt Grondin. “But in the end, that landfill storage is forever storage, and to abandon recycling programs for a year or two of a down market really is a short-sighted solution to a long-term problem.”

Back in Maryland, China’s policy hasn’t led Montgomery County to stop recycling anything. It continues to generate revenues from all the materials it recycles, Kao said, except mixed-color, broken glass, which it pays to recycle because it has little value. The county sells the majority of its bales domestically. In fact, one silver lining to China’s crackdown is a growing domestic market in the US More than a dozen North American paper mills have announced new capacity to process recycled paper, although it will be a few years before all of it comes online.

In any case, there are strategies that local programs can use, either separately or in combination, to find their way back to health and continue recycling waste. China’s policy change may not represent the much-feared “end of recycling” in the US so much as an inflection point.