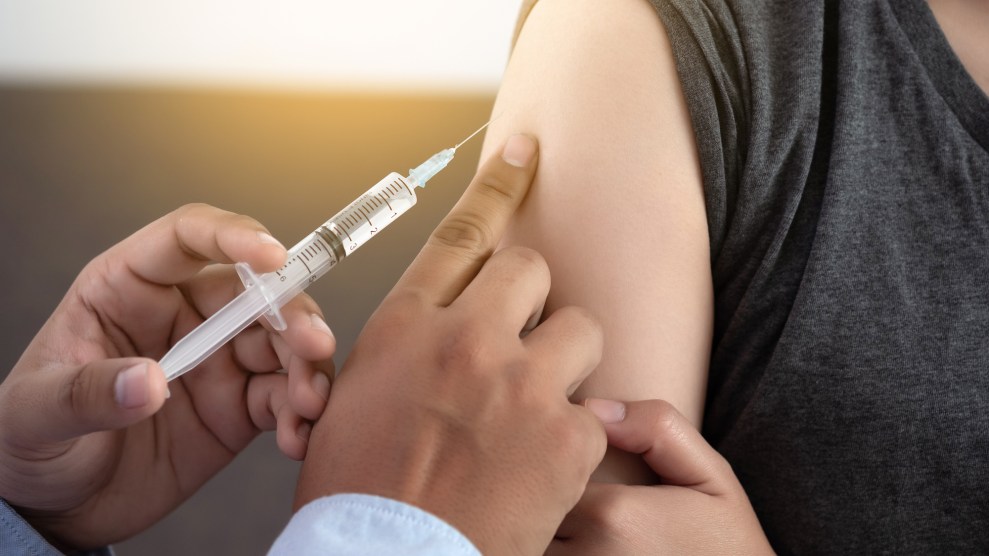 When public health officials began investigating a Bay Area measles outbreak last year, the case led them to two boys who were supposed to be medically exempt from vaccinations. But neither of the boys had cancer, nor were they recent transplant recipients, nor did they have any number of medical concerns that would make inoculation unsafe. When investigators looked more closely, they found that the boys’ medical exemptions had been written by a doctor hundreds of miles away from their home.

Health officials fear that questionable medical exemptions for vaccinations are on the rise in California. A 2015 law made it a requirement for all exemptions to be medically approved, making California among the most restrictive states when it comes to opting out of vaccination requirements. (Previously, parents only needed to state their religious or personal beliefs to get a pass from vaccinating their kids.) But since the law was enacted, “we noticed the rise in advertisement on social media by physicians who are saying, ‘if you pay me cash I will evaluate your child for an exemption,'” said state Sen. Richard Pan, a Sacramento pediatrician who authored the 2015 law. “We’ve even seen posted on Facebook, ‘My child’s doctor won’t write me an exemption, so I had to go travel a couple hundred miles and pay 300 bucks to get one.’”

“We noticed the rise in advertisement on social media by physicians who are saying, ‘If you pay me cash I will evaluate your child for an exemption.'”

That’s the kind of practice Pan is hoping to crack down on. The new bill he introduced in March, SB 276, would create a standardized vaccine exemption request form and subject all requests to review by the state health department. Currently, schools are charged with deciding whether to accept medical exemptions written by doctors. If passed, the bill would make California just the third state to require childhood vaccine exemptions to go through a centralized review.

Concerns about the return of once-rare infectious diseases have gained urgency in recent months as measles outbreaks surfaced throughout the country. According to the Centers for Disease Control and Prevention, there have been 555 cases of measles so far this year, with two ongoing outbreaks and 21 individual cases in California. Many of the flareups are emerging in pockets of the country with low vaccination rates, highlighting the perils of not meeting the threshold for herd immunity—the idea that a disease won’t be able to spread if enough people are vaccinated. “That means the difference between a measles outbreak and no measles outbreak,” said Matthew Daley, a pediatrician at Kaiser Permanente Colorado, whose research focuses on vaccinations. “Strategies to improve immunization rates don’t just protect those individuals, they protect folks who can’t get immunized.”

Earlier this year, more than 40 people came down with the measles in Washington, prompting Gov. Jay Inslee to declare a state of emergency. Clinical vaccination rates in the state for kindergartners fall well below the required 95 percent threshold for herd immunity, hovering around 90 percent and dipping even lower in certain areas. Last week, New York City declared a public health emergency in response to a months-long outbreak in Brooklyn’s Orthodox Jewish community, requiring all unvaccinated individuals to get their shots or potentially face a $1,000 fine.

California began tightening the loopholes around vaccine exemptions after a measles outbreak started at Disneyland in December 2014, when 147 people caught the disease. The following year, Pan authored SB 277, which eliminated the personal belief exemption. When Gov. Jerry Brown signed the bill, California became the first state in three decades to successfully tighten its requirements, joining West Virginia and Mississippi as the only three states that do not allow personal or religious exemptions. At first, it seemed like the law was working—immunization rates were above 95 percent in the 2017-18 school year, up from 92.8 percent in the 2015-16 year.

There have been 555 cases of measles nationwide so far this year.

But in that same time span, the number of medical exemptions more than quadrupled. True medical reasons that prevent a child from being vaccinated do exist, but Daley noted that they are incredibly rare, such as children who are immunocompromised due to leukemia. While it’s possible that the parents of some children with legitimate medical concerns had opted for the easier personal belief exemption, Pan said that the overall patterns in the surge in medical exemptions left him skeptical. Some schools, he said, have vaccination rates in the 70s or lower, while only about 1 percent of children are expected to have legitimate medical conditions preventing vaccination. “These are not schools of children who have cancer or who just received transplants,” he said.

In the 2017-18 school year, more than 4,000 medical exemptions were accepted in California. Around the same time, officials started noticing the emergence of advertisements touting exemptions for a hefty fee. A study of the law’s implementation, published in the journal Pediatrics, highlighted various instances of malpractice around doctors helping parents obtain faulty exemptions. Some doctors, who did not specialize in pediatrics, family health, or other relevant practice, would give exemptions to patients who they did not regularly see. One investigator told researchers about a physician who charged $300 for a temporary, three-month exemption. “She used to just give permanent medical exemptions, and now she’s giving temporary for three months,” the health official said. “So, now families have to go back every three months and pay $300 to get their temporary medical exemption updated. They’re being told you have to renew this every three months. Well, that’s not true it all. It’s a business decision on her part.”

Some doctors have even become the go-to for vaccine-hesitant parents. A Voice of San Diego investigation found that in the local school district, nearly a third of the 486 exemptions were written by the same doctor.

In a San Diego school district, nearly a third of the 486 exemptions were written by the same doctor.

The onus is placed on schools to judge whether these exemptions are valid, Daley said. Overwhelmed and underfunded, many don’t have sufficient nursing staff to meet the workload. Rather than have schools be the judge, Pan’s bill would move the enforcement mechanism to a central body, the state department of health. Currently, West Virginia and Mississippi are the only two states that require medical exemptions to be cleared by a central authority. Unsurprisingly, they have some of the highest vaccination rates in the country. (Though both states have seen a push for looser restrictions, bills to resurrect a personal exemption have been introduced in both statehouses.)

Since it was announced in March, SB 276 has already drawn fierce opposition from the anti-vaccination camp, including a flurry of posts on the Facebook page Californians for Vaccine Choice, a group formed in 2015 to oppose Pan’s first regulation. In a March post, the group called on parents to call their representatives, emphasizing that the “doctor-patient relationship should be protected” and that “this is a health issue. Not a vaccine issue.”

But Pan noted that the bill is backed by physicians’ groups like the California Medical Association and that the law doesn’t force anyone to vaccinate their child. It simply prevents unvaccinated children from enrolling in school, he said, where the could possibly endanger someone who has a weakened immune system. “Frankly as much as the opposition says we’re trying to limit rights and freedoms, the public deserves to be free to go about the community without worrying about getting exposed to disease,” Pan said. “Every time a child receives a false medical exemption, when a physician has forgotten their oath, they are putting other children at risk.”